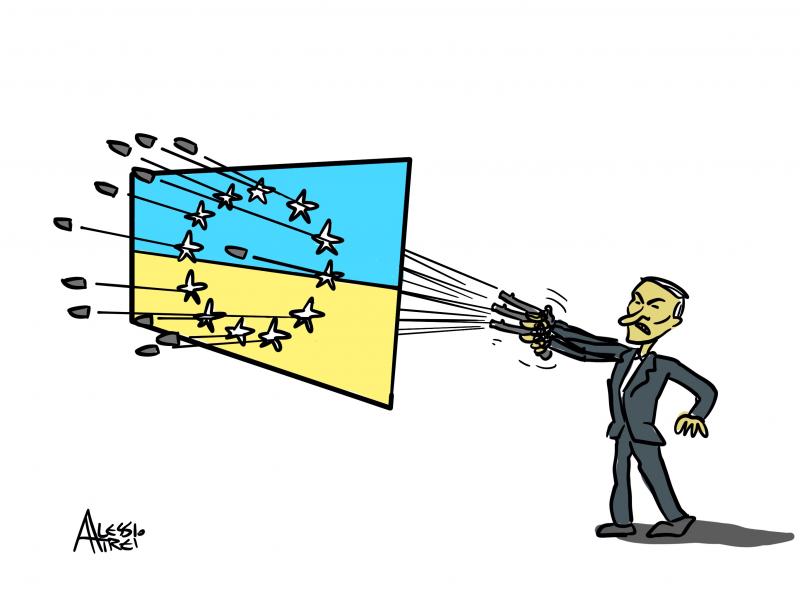 For a Union based on the rule of law

Whether it be the conditionality mechanism or the territorial integrity of Ukraine, Europe must enforce by all its actions the rules that protect citizens from abuses and violations of their rights. This concept will be the focus of the founding congress of the EUMANS movement next week in Warsaw.

Putin's war of aggression against Ukraine makes it imperative to urgently decide what action is needed to defend the Ukrainian people, using all instruments of the international rule of law.

This is why we have decided to go ahead with the founding congress of the EUMANS movement in Warsaw. Entitled "The Open Congress of Citizens for Sustainable Peace, Freedom and Democracy", it will take place on 11 and 12 March at the Copernicus Science Centre.

On 16 February, the European Court of Justice rejected the appeals of the Polish and Hungarian governments against the "conditionality mechanism" that makes the payment of EU funds conditional "on the respect by member states of the rule of law". Conditionality has always been considered a powerful clause to be invoked in relations with member states and third states when human rights and international obligations are violated. It marks a change of situation and a newfound attention to the founding principles of the Union already practised by the European Commission, which had previously suspended the release of 36 billion to Poland and 8 billion to Hungary from the Recovery Fund. The verdict of the Luxembourg Court now allows the Commission to activate for the first time the mechanism for the protection of the rule of law. This means a definitive blocking of disbursement of the money and the imposition of economic sanctions.

The same method of respect for the international rule of law is needed to address the violations of humanitarian law caused by the attack launched by Russian leader Vladimir Putin against Ukraine. This is an unprovoked military aggression against a sovereign state. It follows another invasion that annexed Crimea to Russia and resulted in the militarisation of large parts of southeastern Ukraine. These violations of international law have already caused years of civilian deaths, destruction and destabilisation in a country that was trying to find its way to democracy.

The declarations of friendship and support for this "heart of Europe under attack" must now be followed by political action so that words can be turned into deeds. A for Ukraine's entry into the European Union must be found urgently, and the search for justice must come  before the search for a circumstantial peace. The international community has equipped itself with a court that adjudicates disputes between states. Ukrainian President Volodymyr Zelensky has announced that he intends to bring to this court the charges of 'genocide' committed by Putin. Additionally there exists a criminal court with jurisdiction over war crimes and crimes against humanity. In both cases, Ukraine must be supported: to build a case before the International Court of Justice, and to ratify the Statute of the International Criminal Court in order to activate its jurisdiction.

To let the Ukrainians know that they are not alone and to consolidate their hope for a better and more European future, the EU institutions must be consistent with their obligations. In recent days the Polish government has announced its commitment to abolish the "Disciplinary Chamber", which is one of the devices identified by the European Courts and the Commission as undermining the independence of the Polish judiciary.

Such devices must be denounced as an attack on the human rights of the Polish people, but also more broadly on those who will seek refuge in Poland. Russia's attack could push up to four million people from Ukraine. Poland will be one of the main hubs of reception. It will have to behave radically differently from what happened only a few months ago in Belarus.

We know that a perfect democracy does not exist and every country has its own problems. But this does not mean that we should be condescending when recent or fragile democracies erase the separation of powers or violate human rights. That might mean in prisons, migrant centres, barracks, with minorities of various kinds or origins, privacy, all the way to hospitals and full respect for the right to health - and not just because we are still in the midst of a pandemic.

For all these reasons the European Union must not only arm itself for cases of the most serious violations, it must also equip itself with permanent mechanisms for gradual and effective monitoring and sanctioning, both internally and in the rest of the world. That starts with the part of Europe which is not inside the EU. Respect for the rule of law deserves constant documentation, prevention, respect and protection. It must be carried out with the full involvement of the European Parliament and the citizens themselves.

At the same time, citizens must continue to be trained in the use of the tools of direct participatory democracy in transnational and pan-European contexts. This way they will be prepared for the defence and conquest of fundamental freedoms, from abortion and personal self-determination to the fight against climate change.

We need to equip the European Union with rules that guarantee the full enjoyment of fundamental rights and informed choices. Only in this way will it be possible to tackle the nationalist and prohibitionist impulses that are still present on our continent.

The meeting on 11 and 12 March in Warsaw will also address these issues in order to identify concrete objectives to be pursued with a pan-European mobilisation. The meeting is open, for information and reservations 👉 EUMANS in Warsaw

The EU must not pay to be mocked. In addition, it is time for Europe to invest in resources and rules so that citizens are respected by their nation states, as well as by the Union itself.