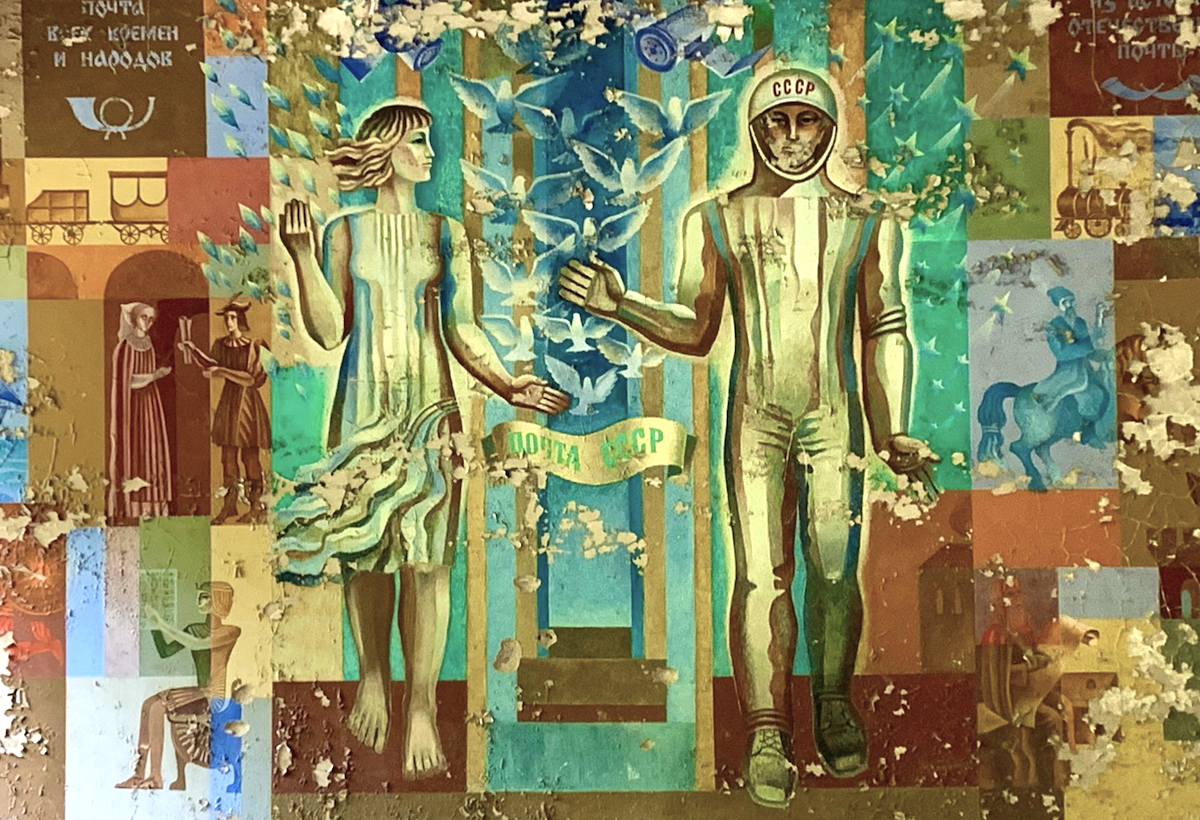 Thirty years ago, the Belovezhy Agreement formally put an end to the Soviet Union. With the exception of the Baltic countries, the USSR disintegrated into smaller post-Soviet entities that still carry the legacy of totalitarianism. This is a major obstacle to pro-democracy movements and democratic transition, writes prominent Russian author Sergei Lebedev.

Pripyat (Ukraine), September 2020. Soviet propaganda fresco in the postal office. The city was abandoned after the 1985 disaster at the Chernobyl nuclear plant. | Photo: Guillaume Teillet

Thirty years ago, on 8 December 1991, in the village of Viskuli close to the Belarus-Polish border, the presidents of the Soviet republics of Russia, Ukraine, and Belarus signed the so-called Belovezh Accords​​, which legally formulated and constituted the end of the existence of the USSR. Today, three decades later, these areas – Brest Oblast, Belovezh Forest, and the Belarus-Polish border – are the territory of an unprecedented conflict for this region and probably for the entire post-socialist Europe as a whole.

The Belarus dictator Alexander Lukashenko, with obvious technical and military aid as well as political support from Russia, is using migrants from Asian countries to create a large-scale “hybrid conflict” on the border of the European Union. With winter coming, the proven cruelty of Belarus troops that are using the migrants as hostages, especially fierce in the suppression of mass protests a year ago, and the tough position of the Polish government that has effectively shut the border, mass human losses in the near future are almost guaranteed.

I believe that this conflict, taking place in the frozen forests near the border, is also a signal: the collapse of the Soviet Union is far from finished. “The USSR, as a subject of international law and a geopolitical reality, is ceasing its existence,” reads the 1991 Belovezh Accords. Now, more than a quarter century later, this phrase should be edited. The USSR in fact did disappear as a subject of international law, although there is a remnant of it in Russia, an underground movement that denies the legitimacy of the accords and therefore considers the USSR still existing; they continue using Soviet money, passports, and symbols among themselves.

However, as a geopolitical reality, in the sense of a number of key practices of political culture and concepts of the relationship between human rights and state rights, the USSR is, as Soviet propagandists used to write about Lenin, “more alive than all the living.” I don’t think it would be an exaggeration to say that the Soviet Union, with the obvious exception of the three Baltic states, Latvia, Estonia, and Lithuania, fell apart into mini ussrs, the USSR on a smaller scale, into nation-state formations that preserved the fatal grain at birth, the totalitarian stamp that in most cases meant the succession of ruling classes and structures, easily descending into authoritarianism.

Again, with the exception of the Baltic states, the new leaders of the former Soviet republics were representatives of the Soviet elites, men of the past: Party secretaries, Soviet ministers, KGB generals, bearers of authoritarian consciousness; there were almost no alternative pro-democratic movements strong enough to form and imple…