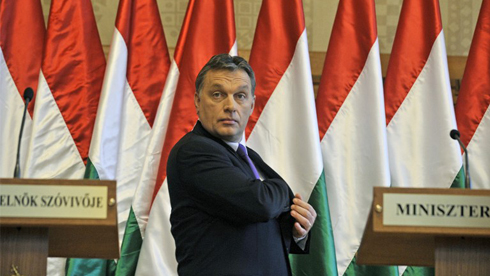 After abolishing automatic voter registration, the Hungarian Parliament is expected to approve a bill restricting media time allotted to parties during the 2014 elections. This is seen as another indication that the government of conservative PM Viktor Orbán is installing a system aimed at eliminating all competition to his Fidesz party.

The electorate is his pocket? Hungarian Prime Minister Viktor Orbán at a press conference in Budapest, February 2012.

Fidesz has accomplished its unorthodox mission: it has created an electoral system so complex, that the party has become difficult to replace. This system also guarantees that, should the rulers stay in play, they can continue their nonsensical adventure with the least possible amount of democratic legitimacy. The collateral damage is the resulting "Catch 14" [a blend of the inextricable absurdity of Joseph's Heller's Catch 22 and 2014, date of the elections]. Yet, if a change does occur – which is improbable at this point in time – the destroyed political structure will make the country ungovernable for the new leaders.

The changes to electoral laws, such as the abolition of automatic voter registration, introduced by the managers of the "Orange Plan" [a reference to the Fidesz party colour] were motivated by a single thought: to exclude voters with a less developed political conscience. But, and this is an open secret, it is mostly the poor levels of society, whose condition was impossible before and is now unbearable, who will fail to vote because they have neither the strength nor the information needed to launch into the registration procedure.

It is revealing that even László Sólyom [President from 2005 to 2010], who you could consider, even if under the influence of mind-altering drugs, as a thinker affiliated to the international left, said that he considered the pre-registration requirement as a test of constitutionality. And, as if the pre-registration were not enough, they are now passing a new law that forbids political parties from campaigning on commercial radio and television stations as well as on Internet news sites. This is so that the advertisements in these media will not disturb the public.

To make things more confusing, there is no sign, for the moment, that the elections will even really be held in 2014 given the current legislation. Even the state of the Greek economy is more stable than the rule of law in the Fidesz. It is a party constantly taking the pulse of its target voters and intervening as soon as there is a sign that the opposition might score a victory.

In the spring of 2010 — and this is not a secret — the texts that described in detail the future according to Orbán made us smile and it was with a sigh that we passed on those that predicted autocracy. Well, it is time for us to write our letters of apology. Yet, according to the rhetoric that has characterised Fidesz over the past 10 years, we could not imagine that it would be cowardice that would determine the government's actions. Yet, those that postpone being tested live in fear. If those in power were sure of aspiring to the public good and that their activities were useful to society, they would not be afraid to confront their opponents according to the tried and true rules of the game. But this party rigs the rules before getting into the ring.

Orbán and his team have pushed the country into this "Catch 14", a bind out of which there is an only slighter chance of escape than in the Catch 22 version.

A law made to order

The law expected to pass on November 19 in the Hungarian Parliament ensures "equality of treatment" for all parties in the 2014 election, says Hungarian weekly Heti Világgazdaság with a touch of irony. The magazine agrees with many observers that the laws proposed by the government have but a single goal: to allow Fidesz, the ruling party of PM Viktor Orbán, to maintain its advantage.

The bill will shorten the campaign period to 50 days from the current 60 days. Advertising for parties will be banned from private media and news web sites. Only public media will be allowed to carry campaign spots, for free, according to regulations established by an electoral commission whose members are appointed, for 9 years, by the parliament in which the Fidesz has a two-thirds majority.

Speaking times are limited to a total of 10 hours for the entire campaign on all of the four television stations and three radio stations. This breaks down to 12 and a half minutes per day for all parties combined.

Billboards and other public displays are unrestricted but must be paid for. And as Slovak daily Pravda has noted, the sector is dominated by a firm whose owner, Lajos Simicska, is close to Fidesz.