Unable to agree on whether to keep their troops in Afghanistan, the Dutch coalition government collapsed on 20 February. The shockwave could hit other European contingents on the ground, predicts the European press.

Brought down a government. A Dutch company patrol in the Chora valley, Afghanistan. AFP 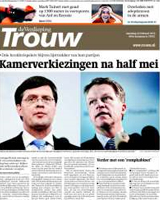 The war in Afghanistan has a new casualty: the Dutch coalition government led by Jan Peter Balkenende. On the night of 19 February, the PvdA (Labour party) insisted on keeping its campaign promise to bring home all Dutch troops in Afghanistan, currently standing at 1,940, by August 2010. The Christian Democrats in the CDA and CU, on the other hand, felt the Netherlands should comply with NATO’s request and leave 500 to 600 Dutch men and women there to train the Afghan police. Early general elections are now slated for mid-May. A Dutch pullout will "help undermine Obama’s strategy and the Afghans’ future," argues political scientist Rob de Wijk in Trouw. The Netherlands are liable to pay for “this amateurism” by being “sidelined in the international arena”. The PvdA’s campaign promises “are of no value to the Americans, their allies or the Afghans. What they need is solidarity."

Unfair distribution of burdens in Europe

“This is the first time a government has fallen over the Afghan issue," observes Le Soir. “Afghanistan may be far away, but when the boys are fighting it out on the ground, foreign policy pops up in the home just as surely as on the benches of parliament.[…] We’ll have to wait and see the outcome at the polls to know how much voter support there is for the Christian Democrats, who favour possibly extending the Dutch military mission in the Oruzgan province. Or, on the other hand, for the Labour candidates, who advocate a speedy withdrawal. Only then will we really know how much weight the Afghan ‘cause’ carries in this country, which is keen on maintaining strong transatlantic ties.” After over eight years of engagement, resumes Der Standard, this sort of crisis was bound to brew: "There is a price to pay for the lack of solidarity between NATO allies and the unfair distribution of burdens in Europe, where some – like Austria – give nothing and others give everything in Afghanistan.” For several long years, the Dutch have been risking their necks in the hotly contested province of Oruzgan, points out the Viennese daily. Many of them have lost their lives there, while others are patrolling less dangerous parts of the country, studying maps at headquarters in Kabul or wringing their hands at home in Europe and airing their doubts” about the war. "No alliance can withstand that for a long time. And no government can go on forever rationalising such an injustice to cajole its electorate."

Over in Berlin, the Tageszeitung is delighted by the Dutch Social Democrats’ “No” and hopes German parliamentarians voting this week on the intervention in Afghanistan will take a leaf out of their book. In Germany, gauges the Berlin daily, it would be “inconceivable” to topple a government over the war. "Back in the 1980s, when the consensus of all the parties on the doctrine of nuclear deterrence began crumbling, we called it the ‘Dutch disease’,” recalls the TAZ. “At the time the Germans learned from their neighbours how to doubt an irrevocable military dogma. The current controversy over Afghanistan is far from any such free-thinking. We don’t mess with taboos. And yet the Dutch example should serve to remind us what a real disagreement on military decisions actually is: part and parcel of a normal democracy." The Times, for its part, find it "regrettable that, just as NATO troops on the ground finally appear to be meaningfully engaged in the pursuit of achievable and worthwhile goals, the political resolve which keeps them there is starting to look shaky".The British daily fears a "domino effect" in other European allied countries, "where public opinion is turning against the Afghan campaign".

Elections on the home front

On the home front, the Dutch have already opened another debate. Municipal elections will be taking place on 3 March, and the fall of the government could be a godsend for the PVV, the right-wing populists spearheaded by Geert Wilders. Trouw, a paper traditionally close to the CDA (Christian Democrats), accuses the two main parties of "rolling out the red carpet for the populists": "It looks as though the [PvdA] party, anxious about the opinion polls, is succumbing to the influence of populists on the left and right, who don’t want to spend a cent on fighting extremism in the world.”