Analysis Invasion of Ukraine | In Russia 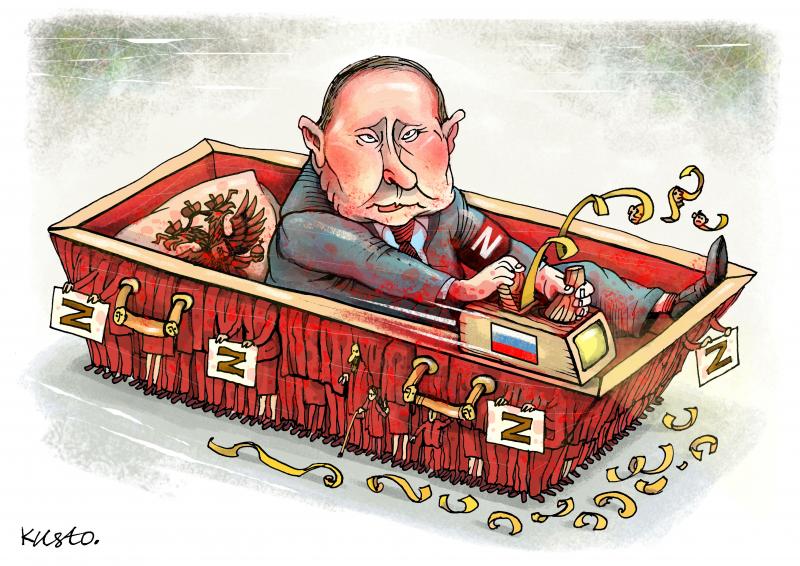 Analysis Invasion of Ukraine | In Russia

The war in Ukraine and Vladimir Putin’s imperial project

Russia’s invasion of Ukraine can be read as the end point of an expansionist project of the Kremlin: Russia has become - or has returned to being - an aggressive, traditionalist, national-imperial power. Andrea Pipino's analysis for Internazionale.

Things have come full circle. Since the collapse of the Soviet Union, one generation has been enough to plunge the new Russia into hell. Thirty years of broken promises, dashed hopes and misinterpreted signals, from Yeltsin climbing onto tanks in the summer of 1991 and stopping the coup by supporters of the Soviet regime, to the show on 18 March 2022 at the Luzhniki stadium: an ultranationalist carnival in which the glossy kitsch of Russian pop-music videos from the 2000s merged with the artificial gigantism of Kim Jong-il's North Korean parades. The end of an era.

The completion of a transition that ended up going very wrong, turning an imperfect but curious and lively post-Soviet country into an imperialist neo-Soviet monster. It didn't have to be this way. And however much one may want to insist on the responsibilities and mistakes of the West, it is hard to believe that what has happened in Moscow over the last ten years is solely the result of an aggressive market-based strategy and Western interference during the delicate period of transformation in the 1990s.

If this were true, we would today be faced with many small Putinist Russias scattered throughout Central and Eastern Europe. Fortunately - with all the flaws of the democracies of the former communist countries - that is not the case.

Many times, in analyses and attempts to understand the motivations behind the Russian attack on Ukraine, there has been talk of Russia's humiliation. And the finger has often been pointed at the entry into NATO of the Central-Eastern European countries. It is explained as an enlargement or expansion of the alliance, with that typical Western-centric mentality that always tends to deprive every subject of a decisional element. Yet this expansion took place because it was wanted by the Eastern Europeans. For them the end of the Second World War was not a liberation but the passage from the most bloodthirsty totalitarianism to a new political order, which after an initial revolutionary phase proved to be brutally authoritarian.

As a guarantee of their sovereignty and territorial integrity, the Baltic countries asked to join NATO. - this after belonging to the tsarist empire, enjoying twenty years of independence between the two wars, and being once again sucked into the Soviet universe following the signing of the Molotov-Ribbentrop pact (their membership of the USSR was never formally recognised by the United States). As did the Czechs, who in 1968 had seen the Warsaw Pact tanks destroy the experiment of the Prague springs. And the Hungarians, who twelve years earlier had gone through a similar, even more violent, experience. And the Poles, mindful of the repression of the workers' revolts of 1956 and 1970 and the martial law of 1981.

The 2008 NATO summit in Bucharest is often cited as evidence of the alliance's adventurous expansionism. But in fact the declaration that closed that summit seems more like a generic statement of intent, forced on Europe by the US administration, than a real political roadmap: "NATO welcomes the Euro-Atlantic aspirations of Georgia and Ukraine . [...] Today we have agreed that these countries will become members of NATO”. Even then it was clear that the European countries of the alliance would not welcome the entry of other eastern nations, especially former Soviet republics. In short, even if Russia had not invaded Georgia in August 2008, making official its control of the two unrecognised republics of Abkhazia and South Ossetia, which it had already controlled for sixteen years, Tbilisi would hardly have joined NATO in any short space of time.

The same can be said of Ukraine. Before the Russian intervention in Crimea and Donbas in 2014, citizens in favour of NATO entry were a distinct minority, around 20 percent of the total. And if Moscow's real goal was to keep Kyiv out of the Atlantic alliance, it would have been sufficient to achieve it by simply applying the Minsk protocols. Some might argue that in recent years military exercises have been held on Ukrainian territory with the presence of NATO countries, to Moscow's understandable concern. It should be added, however, that while Ukraine and 23 other states, not only NATO, were participating in the Sea breeze military exercises in July 2021 (five thousand soldiers involved, organised since 1997), Moscow had already