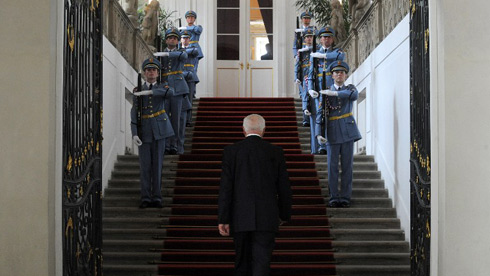 Who will be next in the Prague Castle?

Later this month, the Czechs will elect their first president by universal suffrage. In a country with a long history of strong leaders, the role has often taken on more importance than was codified in the constitution, running the risk of weakening the state, says Respekt.

By way of introduction, let’s set a little test. Which politicians do you remember from the era of the First Republic? Or even the dark period of communism, and the beginning of the 1990s as well? The names that almost always pop up first are Masaryk, Beneš, Gottwald, Husák and Havel. In other words, presidents, and this despite the fact that the Czechoslovak and later the Czech system is not a presidential system (although the Communists made a bit of a mess of that).

Over the last hundred years, the head of state played a much greater historical role than fell to them under the constitution. That’s something that those who believe the presidential election is merely a sideline ought to reflect on.

The first half of the 20th Century is particularly instructive. Czechoslovakia wanted to be the Republic of Masaryk [president from 1918-1935] and Beneš [1935-1948], but ultimately little of that was left standing. Both men were exceptional in many ways, but their image created a picture of a state that was glossier than the reality.

This also prevented the much needed building of working institutions that would survive their founders. Without Masaryk, the Republic was suddenly shrunk to half of what it was, as if it had lost its rudder. Edvard Beneš took it over at a time when he was unable to exert much influence over the future of the country.

The second half of the 20th Century gets interesting after the start of the 1990s. Communist presidents were not representatives of the public, but were the levers of Communist Party power. Worth noting, however, was that, for Klement Gottwald [1948-1953], becoming president was more important than becoming prime minister. Gottwald grasped very well that the head of state would be revered, even idolised, by the people.

After 1989, we again came very close to a semi-presidential system. The popularity and power of Václav Havel [1989-2003] was so huge that initially its influence penetrated every sphere. Fortunately, though, the situation was quickly balanced. When Havel attempted to assert greater influence at the expense of Parliament in the early 1990s, he was thoroughly and rightly rebuffed. Luckily for Václav Havel, he had Václav Klaus [2003-2013]. Klaus was a politician of whom he had little understanding and with whom he had to struggle for influence.

Havel, however reluctantly, soon accepted that he had lost because in the Czech government it is the cabinet that governs, not the president. Havel then withdrew behind well marked-off boundaries. From the perspective of building a constitutional tradition, however, that was a good thing. More importantly, though, was that Havel tried to bring the office of the president down to earth.

He was the first Czech head of state who wanted to break with the monarchist tradition. The best proof of that is the monumental documentary film Citizen Havel, in which he allowed its creators to capture moments of weakness and vanity, which people generally do not admit even to themselves, let alone to the public.

The disadvantage to his successor, Václav Klaus, was that, unlike Havel, Klaus had no such strong opponent, and no one tried very hard to confine Klaus within the boundaries laid down by the Constitution. He was the one to decide who would go and who would stay in government. He vetoed one law after another, attacked the independence of the judiciary, had a huge influence on Czech foreign policy, and took steps to encourage some governments to fall.

So, according to our history, the choice of the next president will determine if we are going to look for a man who will feel that he is above the system or be part of it. History has taught us that we should seek a person who will respect the separation of powers, will know his position in the constitutional system, and will not encourage the people to think that he will be a saviour or sacred autocrat of the political scene.

However, Miloš Zeman [current front-runner in the polls and former prime minister] meets none of those criteria. Under his government [during the years 1998-2002], systemic corruption was greater than it is today. Zeman sought to restrict democratic competition, and was blocked by the Constitutional Court. Offending Germans, Austrians and Slovaks with his carefree arrogance, our relations with our neighbours reached their lowest point.

Thanks to Zeman, the Czechs were slapped with the label of most difficult and least reliable partner by our NATO allies, and the European Union noted in its evaluation reports that practices in the Czech Republic were incompatible with democracy.

The first direct presidential election is fielding many interesting candidates. Too many, in a way. Of those who have put themselves forward, two candidates – Zuzana Roithová and Karel Schwarzenberg – meet the criteria outlined above.

Every voter has a different preference, but it would surely be a shame not to take advantage of this unique opportunity to nudge Czech politics in a better direction.

Noting that the foreign minister has received a massive outpouring of support in the last days of the campaign, Lidové noviny asks if Karel Schwarzenberg might not turn out to be the “dark horse” that nobody considered the favourite but who wins the race in the end. Schwarzenberg, the paper adds, is –

the only one of the nine candidates who is already familiar with Prague Castle, where he served as Chancellor under former President Vaclav Havel after the 1989 revolution. He has been the only one able to bring any excitement to the campaign and get the whole crowd gathered in a square in Prague [at a meeting] to break out in applause.

Schwarzenberg has the backing of most Czech newspapers and influential media personalities. “He has the ability to defend the interests of the Czech Republic with clarity and dignity,” explains economist Jan Švejnar, who has withdrawn from the presidential race. “For Czechs, he offers a wonderful personal story bound up with Czechoslovakia and with the Czech Republic.”

While Karel Schwarzenberg’s appeal is strongest in Prague, the front-runner is still Miloš Zeman, notes Lidové noviny. As for the former Prime Minister Jan Fischer, who was criticised at the end of the campaign for carrying his Communist Party card right up until 1989, he seems to be losing steam and is no longer assured of making it through to the second round.