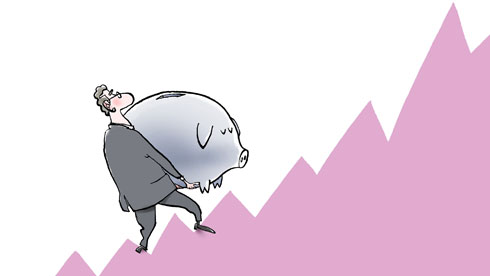 Why change a losing formula?

The heads of state and government met in Brussels to discuss growth but have failed to reach any decision that might give a boost to a Europe exhausted by the crisis and by austerity, laments the European press.

The European Council of March 14, dedicated to growth, was another “predictable summit,” says Il Sole-24 Ore. Despite the glum indicators on employment and production, and despite the anti-austerity protesters who converged on Brussels from all across Europe, the newspaper writes –

It was business as usual in the palace. The conclusions were pre-defined: a little bending of the rules against deficits, and above all, a reduction in youth unemployment, the mantra of the moment. […] No bright flashes, no surprise. As if Europe is not groaning under the weight of recession for the second year in a row. […] It would take a little unexpected flash of brilliance, an unusual exercise of the collective will to drag Europe out of the tunnel of the crisis with less talk and some concrete action.

”Europe is doomed to continue on the path of austerity, opened up by Berlin to lead the European Union out of the crisis” adds Ziarul Financiar. “It was clear from the moment Germany posted an exemplary budget model that promises the lowest deficit in the last 40 years” adds the Romanian newspaper, that –

The price to be paid is going to hurt the entire EU: youth unemployment just about everywhere, crippling recessions in all the countries hit hardest by the crisis… And, what’s more, Berlin is following down the same path in demanding that the term “fiscal consolidation”, i.e. austerity-oriented growth, be mentioned no less than four times in the summit’s conclusions.

Since the Growth Pact was signed last June, “things have hardly progressed” deplores the business daily Les Echos. The newspaper recalls in particular that the “project bonds, these bond issues created to support major infrastructure projects, still hang in limbo, though the initial phase should have got underway last October.” Les Echos nonethess sees a ray of hope coming out of this lacklustre European Council meeting, especially as “France and Italy have won a little leniency from their partners” on the public deficits –

Some of their demands [have been] written into the conclusions of the summit. Paris welcomes the mention in the final text of the priority of “pursuing differentiated, growth-friendly fiscal consolidation”, [which] opens the way for a certain flexibility in the enforcement of a return to the 3 per cent deficit target […] Italy, for its part, pushed for the conclusions to recognise the special status of public investment in the future when it comes to calculating deficits.