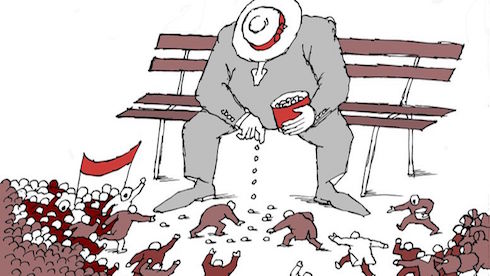 Will populism save liberal democracy?

Populism has been part of democracy since Roman times, writes political scientist Yascha Mounk in Foreign Affairs, and its reappearance is natural after the “extended period of spectacular economic growth” that lasted from the end of World War II to the late 1970s. So, if establishment politicians explain phenomena such as the victory of Eurosceptic parties in May’s European elections as results of financial crisis that will subside with economic recovery, Mounk sees their roots in “long-term stagnation in living standards and deep crisis of national identity”.

Citizens of Western democracies are facing the end of a trend dating from the Industrial Revolution, in which each generation had a higher standard of living than the preceding one, as well as growing economic instability and uncertainty about the future, leaving them “increasingly convinced that the political establishment has failed them”. Compounding the sense of insecurity are “millions of immigrants” who, instead of enjoying temporary stays as governments had promised, have “gained the right to remain in their adoptive countries and started to demand that they be accepted as full members of the nation”.

In such a context, populists benefit from portraying themselves as voices for “silent majorities”, “promising to protect the interests of ‘true’ members of the nation from minorities with whom political elites are supposedly in cahoots”. After a period of economic prosperity in which “the political establishments of most Western democracies managed to banish their populist rivals to the innocuous fringes of political discourse,” the reappearance of populism can appear to be a threat to democracy itself.

But “not every populist movement has to be bad for democracy,” argues Mounk, who says democracies must “give voice to the justified grievances that fuel populism while convincing voters that the simple solutions offered up by the populists are bound to fail”. On the economic plane, this involves risky policy changes —

Especially in southern and western Europe, politicians will have to take deeply unpopular steps, including raising the retirement age and loosening labor regulations. [...] But a new generation of ambitious politicians, including Italy’s prime minister, Matteo Renzi, is beginning to win support for painful economic reforms by giving voice to populist frustrations and rallying voters around the goal of redistribution.

A promising start would be to renounce their long-standing commitment to an “ever-closer union,” an aspiration that makes it all too easy for populists to claim that EU bureaucrats will not rest until they have dismantled Europe’s nation-states. By promising a specific endpoint to the process of integration, European leaders could inoculate themselves against the charge that they are weak on sovereignty while protecting the main achievements of the EU, such as the free movement of goods and people.