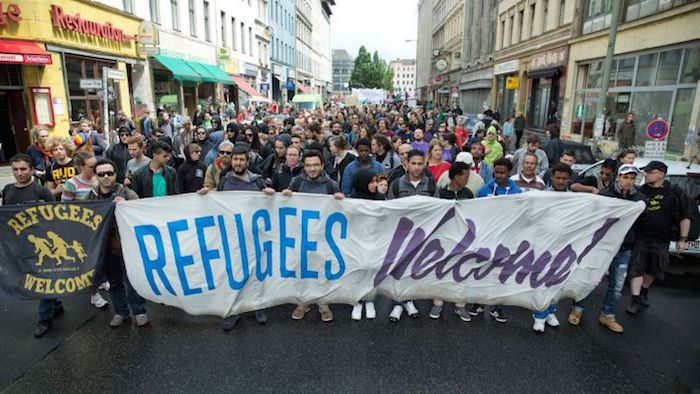 With open arms – but for how long?

Immigration is making headlines across the EU. And amidst stories of rising hostility to Europe's new arrivals, Germany stands out as a country willing to accept and welcome large numbers of asylum seekers. But, writers for Der Spiegel warn, Germany's new-found culture of hospitality is showing signs of faltering.

400,000 asylum seekers are expected to arrive in Germany this year. While other European countries, notably Spain and the UK, have been unwilling to lower the drawbridge to record numbers of people fleeing violence and persecution, Germany has adopted a more welcoming policy. However, recent arson attacks on refugee hostels serve as a reminder of Germany's troubled history when it comes to immigration.

For Germany has not always been so open. Although the post-war years are often remembered as a time of solidarity between West Germans and East Germans fleeing the GDR, in reality, Der Spiegel's team argues, it took years for the newcomers to be accepted. West Germans displayed the same "fear of strangers mixed with concerns about prosperity and loss of tradition" that would characterise prevailing attitudes to later arrivals.

In the early 1990s, arson attacks in Mölln and Solingen characterised a period of anti-immigrant hysteria that, in 1992, cumulated in a tough new law to stop asylum applications. Asylum seekers could only be allowed in if they had not fled through safe countries, virtually impossible given how safe Germany's neighbours are. Chancellor Helmut Kohl repeatedly claimed that Germany was fundamentally not a country of immigration; his views received widespread support from the media.

This law was finally abolished in 2005, and in recent years new legislation has made it easier for immigrants to claim residency and work permits. So what to make of this radical shift in mood? Der Spiegel sees political pragmatism as an important factor. With a declining population and worrying skills shortage, German leaders recognise the demographic benefits of increased immigration. "It would be a waste of resources to forego the knowledge, skills and prior education of immigrants who are reluctant to leave Germany."

But there is also something else at work here, the argument goes —

In contrast to Germany's treatment of its guest workers in the economic miracle years, the country is now willing to invest and integrate. It wants to do more than just take, it wants to give, more than just money, clothing or a roof to sleep under. It is ready to offer its humanity and empathy, closeness and a sense of community, friendliness – yes, even friendship.

Volunteers across the country are helping their new neighbours adapt and settle into to their adopted communities; charitable organisations are collecting clothing, toys and toiletries.

It remains to be seen whether this atmosphere will prevail against the growing sense of unease about the numbers of asylum seekers now living in Germany. The authors suggest that German hospitality has its limits, and without measures to curb the numbers entering the country, this display of solidarity could come to an end.

There is a consensus within large swathes of the population, a consensus of limited compassion, according to which people are willing to give up something but not everything, and certainly not their comfortable lives in prosperous Germany.

They suggest that the government should reform the system for ascertaining the validity of asylum claims. Those genuinely fleeing conflict and disaster should gain quicker entry, while economic migrants, in particular from South Eastern Europe, should be processed in tent camps and repatriated within two weeks of arrival. "The dream of a better life does not qualify as grounds for asylum," the authors claim. Instead an immigration law should be introduced that allows qualified applicants to enter the country through legal channels.

"So what is the state of the nation really?" Der Spiegel asks —

When it comes to refugees, it's a state of anxiety. In reality, it boils down to a question of how the growing influx of refugees and asylum-seekers adversely affects the Germans' relationship to these newcomers. The 400,000 asylum-seekers predicted to arrive this year will put Germany's new welcoming culture to the test. Can it endure? Can it survive?

This article is part of the #OpenEurope project. Run by nine European media outlets, it aims to ‘tell actual solidarity actions on helping migrants and at defending a Europe which is faithful to its welcoming, asylum and openness values'.