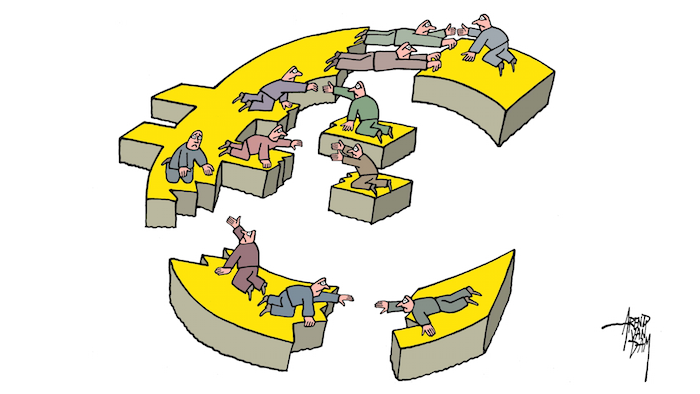 A shared currency without political or fiscal union has left Europe in danger of breaking apart, writes Timothy Garton Ash in British daily The Guardian. The current eurozone crisis has deepened the rift between a still prosperous north and a debt-ridden south. It has also put national democratic interests on a collision course with the EU leadership.

Garton Ash does not believe that break-up is imminent. But it does seem to be inevitable. In an allusion to British economist Adam Smith, he writes —

Given the extraordinary achievements of the 70 years since 1945, and the memories and hopes still invested in the European project, there is a lot of ruin still left in our continent.

The pain will be felt most acutely in the south, but this structural imbalance will ultimately hit Europe's northern powerhouses. The reason, Garton Ash claims, lies in the absence of a political union that could recognise structural differences between member states. US federalism accounts for the fact that Alabama's economy will never perform like California. In contrast, the EU is attempting to transform the entire continent into a German-style "Exportweltmeister". Such thinking fails to see the need for an internal market to export to. "If everyone else is to behave more like Germany," Garton Ash writes, "then Germany must behave a bit less like Germany. But Germany is not prepared to do that."

More pressingly, Europe's south has been battered by wave after wave of cuts and liberalisation, without the desired economic transformation —

Greeks, Italians and French are not Germans. Their economies certainly need structural reforms, which have, for example, boosted exports from Spain, but their societies and companies simply do not respond in the same way.

The outcome is a Europe where national democratic interests are becoming irreconcilable with the EU's core mission. Economic integration has meant suffering for many member states and the strengthening of German hegemony. There is now little appetite for closer political union, even though for Garton Ash this is the only way out of the eurozone's current malaise —

The trouble is that the structural problems of the eurozone require a transnational European democratic solidarity of fellow citizens which does not exist between different nationalities in the eurozone, and is not in prospect any time soon. […] National democracy therefore stands in a growing tension with European integration.

What can be done then? Garton Ash is not optimistic about the union's chances of survival. But it is not too late to change Europe's course —

Can Europe’s 89ers – those born around and after 1989 – generate the political imagination and will that our current politics are failing to produce?