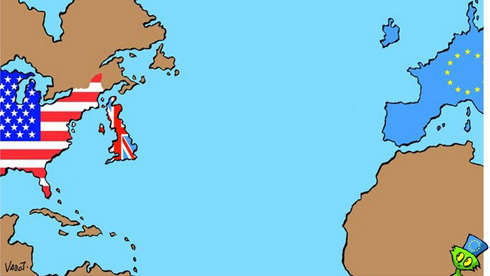 A good deal for Cameron and Obama

The EU-US trade deal mostly benefits David Cameron and the United States: for the UK prime minister, it’s a crucial part of his plan to win support to keep Britain in the EU. For the Obama administration, it’s an economic victory that will boost jobs and exports, believes the Wall Street Journal and the German press.

For The Wall Street Journal, the announcement of trade talks is the result of months of backroom wrangling by British diplomats, both to secure support for the trade deal and in order to ensure a diplomatic coup for UK Prime Minister David Cameron, as he hosts the G-8 leaders in Northern Ireland. The economic daily writes –

For Mr Cameron, the Transatlantic Trade and Investment partnership (TTIP) is far more than just a trade deal. It is central to his campaign to reconcile the UK to its membership of the EU before his promised referendum in 2017. [...] Mr Cameron is betting that a successful TTIP will substantially reduce the pressure on him to deliver a comprehensive renegotiation of the terms of British membership before 2017. [...] The TTIP offers a politically palatable way for Mr Cameron to put the UK squarely at the heart of Europe, his enthusiastic backing for such an ambitious project helping to undo some of the mistrust caused by his past mishandling of key European relationships.

For Die Welt the agreement on a free-trade zone between the EU and the United States will “mainly be of benefit to the US.” According to a study commisioned by the Bertelsmann Foundation and conducted by the Ifo Institute, which probes the consequences of the the implementaion of a free-trade agreement on 126 states —

for the United States the creation of such a zone will generate 1.1m extra jobs and increase per capita GDP by 13.4 per cent. However, it could be detrimental to non-member countries, because member countries would import less from them. This would harm traditional US trade partners, such as Canada and Mexico, which could see a decline in average per capita income of 9.5 per cent and 7.2 per cent respectively.

For its part, Tageszeitung shares the concerns voiced by an association of 22 NGOs, which has pointed out that safeguards for consumers will be undermined when European markets are opened up to the US.

Chicken disinfected with bleach, cloned cattle and GM food — all of these are threats to European consumers.