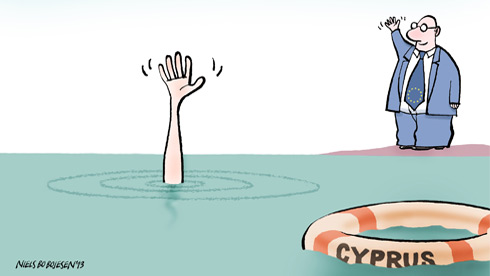 A rescue plan that will kill us

The EU and IMF have agreed a €10bn bailout of Cypriot banks, but the price to provide rescue funds is a tax on all deposits. This condition has stunned the tiny Mediterranean nation, with the Cyprus Mail accusing the new President and other member states of betraying the island.

Even though the haircut of bank deposits had been on the agenda of the EU for more than a month now, featuring in Commission memos and being openly discussed by European politicians, most of whom refused to rule it out, few people thought the Eurogroup would go ahead with it. The prevailing view was that it was an idle threat to force Cyprus to privatise SGOs [semi-governmental organisations] and increase corporation tax.
And after all, President Anastasiades had emphatically declared in his inauguration speech that “absolutely no reference to a haircut on public debt or deposits will be tolerated,” adding that “such an issue isn’t even up for discussion.” Finance Minister Michalis Sarris made similarly reassuring statements, arguing that it would be lunacy for the EU to impose such a measure because it would threaten the euro system.
Germany and the leaders of the Eurogroup opted for this lunacy, calculating that Cyprus is too small and inconsequential for the haircut on its bank deposits to cause contagion in the eurozone [a 6.75 per cent tax will be imposed on deposits under €100,000, and a 9.9 per cent level on deposits above that limit]. Of course, the markets could view the decision differently, perhaps not when they open on Monday, but a few weeks later as it becomes apparent that not even deposits in European banks are safe from raids by the Eurogroup.
It is obvious from the statements made that Anastasiades was blackmailed into accepting what has euphemistically been called the ‘solidarity levy’. If he did not accept it, the European Central Bank would have refused to provide Emergency Liquidity Assistance to the Cypriot banks after the March 21 deadline (it had been extended by two months in January), the banks would have collapsed on the same day, and people would have lost much more of their deposits than the seven to 10 per cent that is to be taken now.
Was there an alternative for Anastasiades? Given the pressure for a political agreement by last Friday, it is difficult to say. All indications are that our EU partners had taken their decision before then, and this was why they scheduled the Eurogroup meeting to discuss the bailout on a Friday night. The Cypriot banks were to be closed for three days [there is a public holiday on Monday March 18] during which all the steps for bailing in deposits could be taken, and the banks could re-open normally on Tuesday.
One deputy wondered on Saturday [March 16] whether it would have been better to allow the two banks that required liquidity assistance from the ECB to go under instead of accepting the haircut. But given the level of interdependence among the island's banks, the problem would not have been confined to two institutions, and the ensuing bank run would have spread. This will be Anastasiades’ main argument in explaining why he agreed to the bail-in of deposits. The alternative would have been the collapse of the banks, state bankruptcy and exit from the euro.
Under the circumstances the president opted for the lesser of two evils, even though we doubt there would be many people who would give him credit for that. In effect, the EU offered a ‘rescue package’ that is designed to destroy rather than rescue what is left of the Cypriot economy.