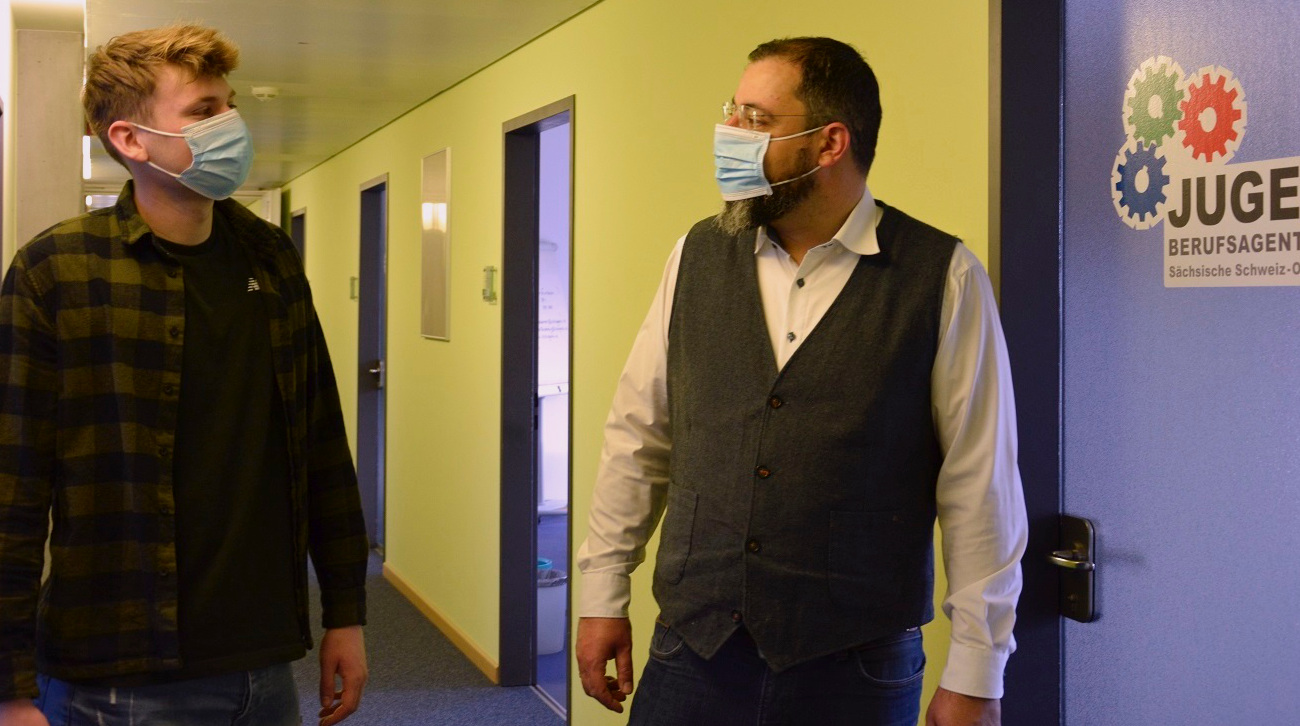 Apprenticeships and Covid-19 in Germany: ‘We were in the eye of the storm’

In 2020, tens of thousands of apprenticeships – a mainstay of Germany’s education system – remained unfilled as the virus prevented companies and candidates from meeting. In some cases apprentices are benefiting, taking on responsibilities they would not normally have had. Nevertheless, just a few months before the federal elections, the situation is causing some to worry for their country.

As a child, Oliver Sachsze dreamed of becoming an architect. When he got his high-school leaving certificate (Realschulabschluss) four years ago, he wanted to become a salesperson and then a dance teacher. Finding one’s career is not easy under normal circumstances, and the pandemic has only made things tougher for young people. Internships, career counselling and job fairs did not take place face-to-face last year, so companies and trainees could not meet in person.

Up to February 2021, 387,471 training places were registered in Germany by the Federal Employment Agency, which was about 8% less than in the previous year. There were 12% fewer applicants than in 2019, and some 60,000 training places remained unfilled. To address this trend, employment agencies, as well as chambers of commerce and industry, have been offering virtual career-guidance formats such as online speed-dating.

Oliver Sachsze found his internship before the crisis, through the job centre. It is at Büroland, a company in Chemnitz (Saxony) with 23 employees that sells quality office furniture. "We transform yesterday's offices into tomorrow's working environment", reads the company's website. The slogan sounds like a visionary insight today. When Oliver Sachsze started his apprenticeship here in 2019, Corona was still just a brand of beer and he was training mainly to sell furniture for large office buildings, shops and conference rooms.

At that time, no one at Büroland had imagined the office of the future. But the company quickly adapted and now sells height-adjustable desks and ergonomic office chairs to teleworkers. "To avoid neck pain", explains the 20-year-old, who has not lost his sense of humour and still lives with his parents, among Ikea furniture. He would have liked to move into a "beautiful attic flat" just after starting his training, but given the situation he prefers not to live alone.

However, he never feared that he would not be able to continue his apprenticeship. While his managers were placed on short-time hours soon after the pandemic began, he and three other apprentices "ran the shop" full time, 40 hours a week, with no pay cuts. It was a straightforward calculation, says Oliver: "We keep the apprentices as cheap labour and the rest of the company we can save in other ways. When you put it like that, it might sound a bit ugly, but I don't blame my boss at all, because I couldn't do anything at home anyway and I was happy to go to work to stay active and see people." When the first subsidies came in under the federal Ausbildungsplätze sichern programme – which aimed to save traineeships – a Corona bonus of 300 euro was paid to everyone, including apprentices. The chances of Oliver being hired by the company after completing his training are also very good. "No need to worry about me", he says.

In the hotel and restaurant industry, the situation is often much more difficult. Many internships have been cancelled and lots of young people have had to change their plans. The situation at the Tortue hotel in the centre of Hamburg became critical when, in March 2020, the guests stopped coming. Reservations, catering, events – everything came to a sudden halt and the hotel had to close down. But the trainees were not let go. Inventories, maintenance and cleaning work helped pass the time until the hotel reopened in the summer. "There was a lot of cleaning to do and it wasn't always easy", says Paul Höfkes, a second-year trainee cook. When the hotel had to close again at the beginning of November, the apprentice cooks took over the catering for the staff. "I wouldn't have had so much responsibility under normal conditions, it was great", Paul says.

More : Coping as a student during Covid-19

Courses in sales, marketing and communication were not the only subjects to go virtual. Cooking modules – such as preparing risotto or cocktails – were also held on Zoom from the beginning of the year. The apprentices collected the necessary ingredients from the hotel beforehand. All trainees had to participate in the kitchen course, regardless of their chosen vocation. "I would never have had the time to participate if the hotel had been running normally", says Renée Adam, who will finish her apprenticeship as a hotel technician this year. "We wanted to broaden their horizons because it benefits everyone", explains Isabel Raschke, HR manager.

Despite all these efforts, apprentices were temporarily put on short-time working during the closure of the hotel, while keeping their normal salary. Some hotels only paid their apprentices 60% of their salary for the first three months of short-time work, then 70% and 80% in stages, as is the case for all other short-time employees. "We didn't want to do this because the cost of living in Hamburg is very high", says Isabel Raschke – who can now take a breather because, since the hotel reopened to business guests in April, around 95% of the apprentices are able to work full time again.

In the eye of the storm

Martin Barthels, 21, who will complete his apprenticeship as an assistant at the Saxony Employment Agency this summer, has also had to come to terms with the new situation. When he started his training, he learned, among other things, how to calculate unemployment benefit and child benefit. In March 2020, short-time working suddenly became the hot topic, a subject that even his trainers had not previously paid much attention to. While 900 companies had applied for short-time work in Saxony in the whole of 2019, in March 2021 alone there were 1,000 applications.

To meet this demand, apprentices were also used even though it was not part of their programme. After two weeks of intensive training they found themselves on the job. Martin Barthels recalls: "At the time, nobody knew what was going to happen and the atmosphere was oppressive. We were in the eye of a storm. But I felt good." It is no small task to provide motivation over the phone to so many people in dire distress. Martin did not need the services of the in-house psychologist that the Saxony employment agency has been offering its staff since the beginning of the crisis. Nor is he afraid of losing his job himself. On the contrary, unemployment benefits and short-time working will continue to be in great demand in the current context.

“The mood is changing”

In April 2020, over 13,000 people lost their jobs in Saxony. In April 2021, the unemployment rate stood at 6.3%, slightly above the national average of 6%. Martin Barthels is concerned about this, particularly in view of the next federal elections, due in September: "Many lives have been upended and I fear there will be a shift to the right.” In the 2019 regional elections in Saxony, the Alternative für Deutschland (AfD, far right) came out on top with 27.5% of the vote, mainly at the expense of the far left (Die Linke) and the Christian Democrats (CDU). "The CDU will continue to lose votes", thinks Oliver Sachsze. "Many people do not understand the decisions taken during this pandemic, I am sure that this will lead to a shake-up. The mood in our country is changing, but any upheaval can be good. No one in the AfD is capable of becoming chancellor, I still have faith in our democracy."