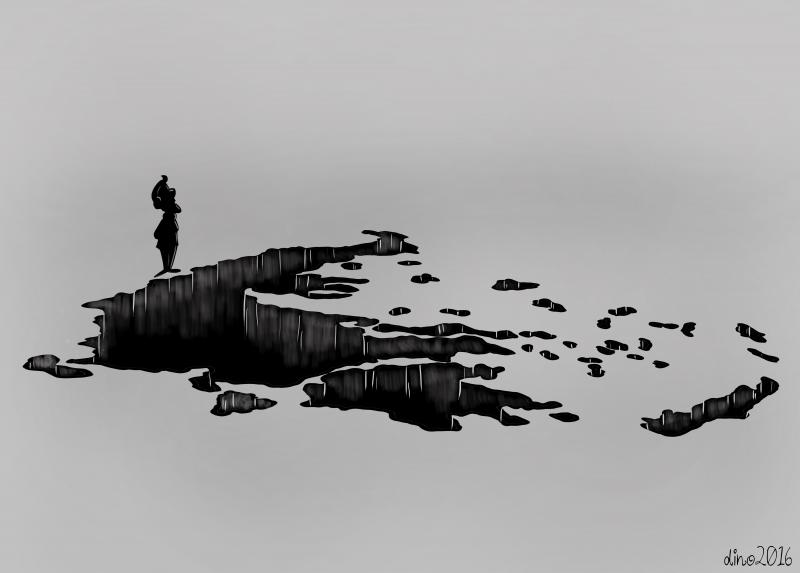 Students & Covid in Greece: ‘Tell me where all this ends’

In Greece a lockdown has been in force since early November and universities are closed since February 2020. The so-called “Gen Z”, who had endured a 10-year economic crisis has been renamed “generation Covid” or even “quarantine generation”, reports Kostas Zafeiropoulos in Athens.

Many of those born in mid-90s’ are not familiar with Queen’s Bohemian Rhapsody, or with last year’s popular Covid remix:

The pandemic is a shock which affects everybody’s life. There are some, even in the developed world, who haven’t experienced anything but crisis. In Greece, the generation that experienced a 10-year financial crisis, so-called Gen Z (and recently renamed Generation Covid or Quarantine Generation), seessees it likelike a bad joke: a combination of a public-public-health crisis crisis and a financial oneone. These young people have These young people have learned to perceive life as a constant threat.

“Tell me, when does does this end ? We would be more relaxed if we knew the end of the tunnel. People around me were at a point where we were starting our lives, having our first real full--time jobs, our first homes, becoming adults. All of that is currently on on pause” said Maria Brofa, 25, a senior civil-engineering student at Patras University. While working in a health--security services company, she feels luckier than her friends, since most of them lost their jobs during the pandemic.

“There is great insecurity. A large proportion of students were employed as waiters or waitresses on the black labor market – until obtaining their degree. They weren’t officially registered as labor. So, not only have they lost their jobs but also an opportunity to have any income or subsidy’,,’ Maria explains. They returned to their parents’s’ houses and put their lives on hold on hold. Permanently connected to the internetconnected to the internet and stressed, they avoid meeting their vulnerable parents and are listening to media accusing them of irresponsible behaviour.

Greece is under lockdown since early November due to a spike of infections and has seen pressure on its healthcare system ease, with infections receding. Universities have been closed since the beginning of the pandemic, in February last year. Of course, there are online classes and exams but all these involve severe problems, not only in their educational aspect (technical subjects are suffering, with classes and labs are postponed) but also on an economic level. The government claimed, especially during the first and less painful wave, that "Greek higher education institutions were quick to replace face-to-face lectures with online learning". However, more than half of those who have started university during the last two years have not spent an hour physically in class.

Greek lawmakers passed legislation on 11 February as part of education reforms that students say threaten academic freedom established after the end of military rule in the 1970s. The new law allows special police on university campuses and has also led to a dramatic reduction of the admissions of students. Over the last three months dozens of student rallies against this new law have taken place all over Greece.

In a very recent study by the Nicos Poulantzas Institute (NPI), researchers asked participants aged 17-34 to describe two key feelings when considering their current situation. The sentiments that dominate young people are disappointment (49%), anger (41%), disgust (27%), desperation (25%) and fear (19%). Only 17% feel positive and optimistic or have some hope. Seven out of ten said that the pandemic affected mostly their mental wellbeing. 16% worried about their finances. Conversely, 66% of the participants still somehow feel satisfied with their lives. Too young to despair entirely.

“Luckily, we still don’t have our own children. Our sociability has indeed been influenced as well as our relationships. These may sound like first-world problems, and they are, but this was our everyday life. The worst part is that new memories, images, experiences and relationships are not generated”, explains Giorgos, 21, a 3rd year student at University of Athens.

According to the same research, the economic consequences of the pandemic are considered most significant to one in five (21%). A bitter smile is on Maria's bright face when we ask her about state financial support for young people affected by the pandemic. "Our only hope is for our dads and moms, their salary or pension to be sufficient for all of us".

Vaccination of hope and fear

As for their views on  the pandemic, young men and women reject the accusation of "irresponsibility" on their part. They claim that democratic rights, such as that of protest, should not be violated even in the midst of a pandemic. They also believe that the findings of science and research should be put to the common good and trust mostly the public sector to provide solutions in times of crisis.

In the Poulantzas Institute survey, 31% of young people (compared to 34% in 2020) said they had little or no confidence in the institutions mentioned. The ones they relatively favored – though always less so compared to most European countries – were justice (38%), the European Union (only 28%) and the police (27%). It should be noted that the data was collected before the latest incidents of police arbitrariness and violence in Greece. On the other hand, among Greeks the young have the lowest confidence in political parties (only 11% say they trust them "a lot" or "enough") and especially in the media (6%). This sets a new negative record for Greece.

"The most serious finding of our research was the growing devaluation of institutions in the country. Young people, especially in southern Europe, are always more skeptical. But whatever situation already existed in Greece, it has worsened with the pandemic. It is a generation of contradictions, which has accumulated difficulties but also has an admirable spirit of resistance. A generation politicized in its own way, ambivalent, active and anxious, looking for solutions", explains Danai Koltsida, director of the Nikos Poulantzas Institute and coordinator of this research on youth trends.

In the end the label of Lost Generation could prove wrong. What is certain is that Queen will not be on the soundtrack of this era. Let’s hear Simon & Garfunkel’s Sound of Silence instead.