Social Issues
Demonstrators with the flags of the PIIGS, the EU's underperforming states, during the general strike in Lisbon on November 14. 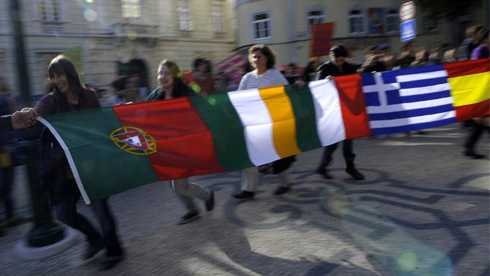 Hundreds of thousands of people took part in protests against austerity policies organised in several European countries by the European Trade union Confederation. For the European press, this austerity fatigue should prompt a rethink on the drive to balance public accounts.

Demonstrators with the flags of the PIIGS, the EU's underperforming states, during the general strike in Lisbon on November 14.

As strikes brought transport services to a halt in several countries, there were major clashes between protesters and security forces in Spain, Portugal and Italy.

For El País, which led with the “hundreds of thousands” who “took to the streets to demand that [Prime Minister Mariano] Rajoy correct his policy”, yesterday’s demonstrations were "a pan-European protest […] against the diktat of austerity" —

Several countries were affected by marches and demonstrations, which were reinforced by partial strikes in Italy and Greece as well as general strikes in Portugal and Spain — an Iberian reflex that implies a convergence in the social situation in both countries. In any case, the pan-European protests are the reflection of an unprecedented movement for solidarity that aims to combat the sacrifice of populations for deficit targets, which unions believe are directly responsible for recession and mass unemployment in Southern Europe. European institutions should also be concerned by yesterday’s protests. The proof of this is that Economic and Monetary Affairs Commissioner, Olli Rehn, who held an improvised press conference to dismiss the idea that the Spanish government would demand further belt-tightening from its citizens in 2013.

For economists the protests first and foremost offer proof that a policy of indiscriminate cuts and sudden increases will likely backfire instead of restoring confidence. A squeeze in the form of tax hikes and public spending cuts undermines growth. Declining growth results in lower tax revenues, which in turn contribute to greater spending deficits and a repeat of the cycle. Over the last two years, the aggravation of the crisis in Greece has proved to be an extreme but also abundantly clear example of the vicious circle created by austerity at all costs. […] The impact on growth is also beginning to tell in countries that are not traditionally thought to be fragile. After the Netherlands, France is starting to run out of steam, and more importantly recession is closing in on Germany. […] In yesterday’s revolt against austerity, there were no strikes in Germany. Let’s see if this still holds true in a year’s time.

“Violence against austerity has come to Portugal”, laments Público, in the wake of the general strike which was marked by clashes between police and protesters near the parliament in Lisbon. Noting that 48 people were injured and 9 arrested, the daily wonders what it is that "motivates the protesters” —

What motivates the protesters, whether they be violent, peaceful, organised or wildcat, is the hopelessness of the situation affecting them. Falling wages, public service cuts and unemployment have always been and continue to be powerful sparks for social revolt. Without political answers, we will have to live with images of Athens-style conflict that until recently would have seemed impossible in the streets of our cities.

… they do not say how the government is supposed to pay off debt that has been incurred by years of support for a generous system of social benefits. The idea that only the rich should pay for the crisis may make political sense, but it is economically unsound. In every country, the rich are only a small group, which is why state budgets are financed by average-income earners, who now have to bear most of the cost of the crisis. The European debt crisis is actually a crisis of the European welfare state model.

“Europe goes on strike while Germany looks on”, points out Tageszeitung, which ironically remarks that while “millions of workers have gone on strike to protest against the consequences of the European Union’s crisis management policy, their colleagues in the country that has actually benefited from the situation have sent a message of solidarity”. Noting that the German unions have been criticised for failing to mobilise the country’s population, the alternative Berlin daily argues that Germans continue to believe that the crisis could be resolved by the proverbially thrifty “Swabian housewife” endorsed by Angela Merkel —

The impact of the crisis has yet to be felt in hearts and minds as well as wallets. Many workers are still convinced that a dose of Swabian housewife mentality is what is needed in Southern Europe.