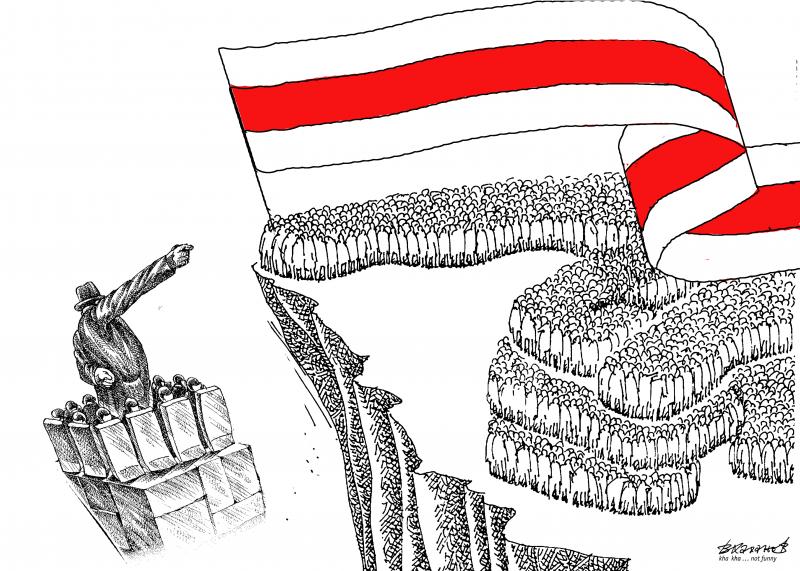 The events unfolding in Belarus in recent weeks have seen a sleeping nation awakening and demonstrating en masse its opposition to the "last dictator of Europe". What answer should the rest of Europe respond with? Wojciech Przybilsky tries to find some answers.

The events unfolding in Belarus in recent weeks have been a bittersweet surprise for many observers. A sleeping nation has awoken and is demonstrating en masse its opposition to the "last dictator of Europe" using peaceful demonstrations.

The regime, on the other hand, has shown its worst face, provoking a legitimate juxtaposition with the torture documented – and widely condemned – in Syrian prisons.

What answer should the rest of Europe respond with? The plan must take into account the particulars of the Belarusian situation and, at the same time, be developed and implemented quickly. The pivotal moment of change may only be a week or two away; the effects resulting from how it is realised could have ramifications for Belarus and the larger region for many years.

The steps taken by Mr. Lukashenka and his administration are not so new. Alleged murders of political opponents at the beginning of his reign, falsified referenda prolonging his reign and murderous methods of exercising social control, including cruel death sentences, were no secret. However, the West turned a blind eye to them without having a clear social partner on the Belarusian side – the society itself was in lethargy.

The official ideology – fully continuing the lies of the USSR and formal political integration with Russia – seemed to have long defined Minsk’s political trajectory. Even the recent flirtations towards the West resulting in higher-level meetings and energy diversification projects with the help of the USA and Poland were barely a fig leaf in the trend of further subjugating the country to the will of the Kremlin.

Against this backdrop, it is quite commonly accepted that European Union can do little and continue to wait for better times – the implosion of the political or economic systems, which are not guaranteed to happen at all. Although it may have seemed a reasonable strategy before, this recent developments show how wrong this approach has been.

The scale and social self-organisation must by now dramatically change the perception of Belarusians as a society and nation, and therefore new approaches in the broadly understood policy towards this country can and should be risked. In recent days, the classical paradox of this region of Europe has become apparent.

The awakened social and national consciousness of a multitude of people who, despite their personal risk, first organised social control of elections across the country documenting irregularities, and then stood up against the regime’s batons and organised mass strikes in key state institutions; this is irrefutable proof that we are dealing with a civil society defending human and civil rights on the grounds of European values – those of the West.

Meanwhile, the Byzantine dominant power over this society, whose features were once described by Milan Kundera in his famous essay for the New York Review of Books, comes from a different order – an order supplanted by Europe.

Lukashenka is not and never will be a guarantor of Belarusian sovereignty. As a man outlawed, he is the leader of an illegitimate junta exploiting this country. His personal needs and give his closest allies the profits from the shrinking economy are contrary to the national interest of Belarus and most probably the will expressed by the people in their votes.

In a situation of open opposition, the scale of which no one – including the Minsk administration – expected, the king turned out to be naked, and Mr. Lukashenka future in power is only determined by his readiness to intimidate and be intimidated.

Europe and America have so far maintained that in Lukashenka one can have a partner for talks and the current political formula of Belarus may even be a useful bridge of dialogue with Russia as in the case of the “Minsk agreements”.

If the opposition does not manage to bring about changes quickly, the situation will only get worse. Let us remember the recent example of Venezuela, where the Maduro regime lost its legitimacy to rule, and even after thousands of protests and considerable international pressure, the situation has not changed.

Of course, Belarus is not Venezuela, but this comparison is more than just a parallel. In the 2000s and 2010s Hugo Chávez was in regular contact with Lukashenka, who advised Chávez on how to forge his own constitutional referendum, and in return Chávez supported Minsk in negotiations with Moscow. Tyrants and nationalists alike are subversive beneficiaries of globalisation.

Scavengers from the east

Moscow’s thus-ambiguous international relations position shows there is clearly no plan for Belarus yet, but let’s not delude ourselves; the plan will be quickly established and implemented.

In its attempts at integration so far, Russia has not shown any care for the economic development of Belarus. At most, a few oligarchs could be drooling over the idea of taking over the remains of their neighbour’s national property.

For his own part, Lukashenka knew how to elevate his position and importance to Putin when he, for instance, recently invited NATO representatives to military exercises.

It turned out to be a real headache in Russia to show the social power of Belarusians as a society. Just as under Putin in Russia, a globalised middle class finally emerged in Belarus.

As we wrote in the Visegrad Insight report on trends in the Eastern Partnership countries, social dynamics and the will to empower pulsates throughout the region, and in Belarus it is particularly driven by technological progress and urban culture.

Using available information channels, civil society quickly built the foundations of self-help and organisations that breathed spirit into the national revolution that is taking place before our eyes today.

Flagship digital projects such as Viber or World of Tanks are at the forefront of the growing export of digital services and have been growing dynamically (in 2017 exceeding 4% share in foreign trade). The standard of living of a small group of young people around Minsk began to be an inspiration for people growing up across the country.

Suffice it to say that the digital culture in Belarus and internet penetration in the country even from the time of Euromaidan was greater than in Ukraine.

Focusing on the development of this branch of the economy under the conditions of relative autonomy required by the digital sector, Lukashenka somehow created whip for self-flagellation.

The COVID-19 pandemic has unexpectedly become a catalyst for civil society. As always, the Western public awareness is built up by the sense of personal and collective security of public services. When the virus reached Belarus, the administration made shameful mistakes disregarding the threat and leaving the citizens alone.

As a result, using available information channels (Internet), civil society quickly built the foundations of self-help and organisations that breathed spirit into the national revolution that is taking place before our eyes today.

Trade unions have regained their vigour after 30 years and are key elements of resistance against lies and terrorist methods of the security apparatus. This, of course, threatens an economic disaster at a time of pandemic collapse around the world. Perhaps that’s why Belarusians are saying enough is enough.

At this point it should be mentioned that Belarusians are fighting thanks to the information sovereignty obtained even partially, the first and last bastion of which was the communicator Telegram, and the popularity of Svetlana Tikhanovskaya’s husband was built as one of the most popular vloggers on YouTube and social media outside the official circulation.

All of this highlights the power of the powerless, consisting generally of civil disobedience, against an authoritarian lie, about which Václav Havel once coined, a revolutionary moment.

As our Belarusian experts said in the closed part of our meeting Belarus: Change or Acceleration for literally several weeks opened a chance to switch Belarus to other tracks. This is exactly the time when Belarusians need wise and, above all, quick backing in several areas.

First of all, the society needs legal knowledge and documentation techniques as well as strategies for seeking justice against all cases of crime, acts of terror and torture. Crimes against the Belarusian nation must not be forgotten, but it is precisely Poland that has a large amount of achievements in this field. The perpetrators must already know not only that they will be accounted for, but also how.

Secondly, immediate support is needed for the strikers who are currently being intimidated with criminal punishments by the regime. International trade union organisations, as well as national organisations, have the resources to know how to strike, how to defend themselves against repression and can provide real support by reaching out to the strikers and their families without raising these actions to the state level.

Thirdly, the government of the Republic of Poland and the EU cannot expect and press for dialogue or try to communicate beyond Belarusians’ backs.

No one except civil society in the country has the right to decide on their future. Even if we are asked to do so, we should avoid a format in which we would become a weak guarantor and permanent hostage of such a dubious process.

Elections cannot be considered, and it is difficult to negotiate with the leaders of the junta. According to the letter of the law, the head of state becomes prime minister after the vacancy of the office of president.

Although he is a morally dubious figure closely related to Lukashenka, one cannot sanction lawlessness in front of the eyes of a neighbouring nation by trying to talk to the current president.

However, what if the moment passes and all the efforts are fulfilled? Let us remember that after the events of the last few weeks nothing will be the same in Belarus.

Its symbolic banner is again the white-red-white flag and even if the country transformation will take even more time, Poland and Europe must recognise its nation as the legitimate sovereign and ensure no appeasement towards its late tyrant.

It’s not only for the sake of Belarus but also for the credibility of the Europe’s Eastern Partnership framework and participating countries.

More : Belarus will never be the same again
Categories
Civil SocietyGovernance, Transparency, and corruptionPolitics and democracyBelarus