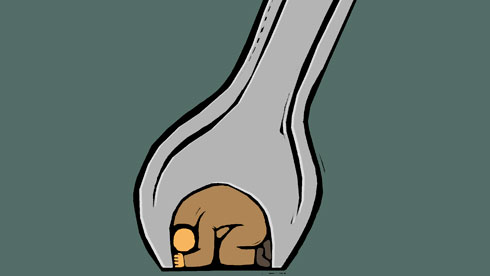 Cheap and always ready for work

The exploitation of Eastern Europeans by unscrupulous employment agencies is not confined to bulb and asparagus fields. At Amsterdam’s Schiphol airport, agencies also have Czechs working too many hours for too little pay. Apparently their intentions are not always bad, though.

A white minibus from Werk & Ik is parked by a row of garages in an industrial park in Osdorp. It is evening, the roll-down shutter of one of the garages is closed, but the door is not locked. Inside, the garage turns out to serve as living accommodation for Czech temp workers from Werk & Ik.

A woman shows us the bedrooms: five plywood cubbyholes, each with a set of bunk beds. A neon strip light shines into all the rooms, even those where people are trying to sleep. There are no windows anywhere, no fresh air. Some estimates put the number of Czechs, Poles and other Central European and Eastern Europeans working in such conditions at 100,000.

Werk & Ik – turnover €12m – likes to employ Czechs, particularly at Schiphol, where they clean aeroplanes and work in baggage handling. But are these temporary employees paid enough? Not according to the data supplied by Czech student and cleaner George. The director of [trade union] CNV, Henry Stroek, points out that George was not paid any holiday allowance in 2012, for example. That amounts to 16.3 per cent of his wages that have never been paid. “That’s a lot of money, particularly for someone around the minimum wage level,” says Stroek. Werk & Ik director and owner Ivan Karels admits that some Czechs have not received any holiday allowance. “They slipped through our administration. But we are keeping a closer eye on that now.”

At its Czech recruitment website, Werkczeck.cz, Werk & Ik promises a net wage of €5 per hour, regardless of age. According to Stroek, from CNV Vakmensen (CNV Professionals, part of the National Federation of Christian Trade Unions), George’s wage slips show that he was paid the correct gross wage, with correct bonuses for evening and night work in only one year out of two.

Consultant Rewiesh Jibodh, who brings Czechs to the Netherlands for Werk & Ik and is responsible for their work timetable, says he can explain that. “Of course the hours are incorrect sometimes. If someone suddenly reports sick and his replacement is not on the list, then it can happen that the hours are added to the sick employee’s. But we always correct the mistakes afterwards.”

Another problem is that [[the temp workers are not given their wage slips, which is a legal obligation]]. George only received his when he threatened to call in a lawyer. “They lose them or throw them away,” says Jibodh. “It costs us paper. I can’t see the point.” The wage slips should be available online, but temp workers interviewed had been given neither a user name nor password. That is also something that has slipped through, admits Karels.

Werk & Ik also deducts costs. For example, it even deducts for breakages from the wages of people who did not break anything. “That’s right,” says Jibodh, “But they don't tell you how they've completely wrecked a house, got drunk, behaved like adolescents. A new microwave oven was broken recently, and nobody owned up. So they all had to pay.”

However, the biggest deductions are for accommodation: the employment contract states €2.50 per hour worked. In the summer months, that means the Czech workers pay between €120 and €150 a week for a bunk bed in the garage, which, according to the municipality of Amsterdam, is not intended as residential use. Last Monday, inspectors raided and evacuated the premises. The situation was “lethal”, says their report, which speaks of “exploitation”.

“We adhere to the existing criteria for accommodation,” says Ivan Karels. “That's not the case with the garage, I won’t deny it. But the young people like to live there, they would have to adapt more in a residential community. I’ve got plenty of other available accommodation, which is just standing empty.” However, trade unions take a dim view of these charges. “Employers are allowed to withhold a maximum of €68 a week for accommodation for someone on a minimum wage,” snorts CNV's director, Stroek. “This is daylight robbery”.

“We are, I admit, well in the wrong with these deductions,” responds Karels, “But not in any way deliberately. I’m just a businessman, who works really hard and wants to grow quickly. Then you get teething troubles. We’re going to put the situation right for everyone”. He says that the amount also covers other costs: energy, water, Internet and the driver who ferries them to and from work.

One day off a month

Legal limits on the number of working hours are also being exceeded. One example is the timetable presented by Pavel the driver, who has been taking other Czechs to and from work for more than a year now. Some of his working days were easily 20 hours long. [[Cleaner George’s time sheet shows that he had just one day off in the whole of August]].

According to the law, cleaners are supposed to have 10 hours of uninterrupted free time after a day’s work, and 36 hours off after a week on the job.

A whole year of night shifts

Karels acknowledges that, too. “In some cases, we haven't been strict enough on that," he says. Manager Jibodh explains that the company is just trying to comply with the temp workers’ wishes. “Our Czechs beg me to give them more work,” he explains. “I always ask them if they want another shift.” However, when one of George's colleagues asked if he could work different hours, after a year of working night and day shifts, he was told: “You can go back to your own country, if you like.”

Astonishingly, Werk & Ik, which has regular clients such as KLM, is accredited by Stichting Normering Arbeid, the watchdog that ensures the correct legal minimum wage payment. The certificate was even renewed in May 2013.