Chronicle of a disgrace foretold

The sudden fall from grace of Dominique Strauss-Kahn has raised two big questions in France. What now for the left that had pinned all its hope on the IMF chief to beat Nicolas Sarkozy in the 2012 presidential elections? And why have the media been silent for years as to his troubled relations with women?

The bigger they are... Dominique Strauss-Kahn campaigning for the French Socialist party primaries for the presidential elections of 2007.

The DSK affair concerns only the private individual Dominique Strauss-Kahn. This could be no more than a seedy news item: a prominent person accused of sexual assault, attempted rape and forcible confinement; a 62-year-old man accused of assaulting a young woman, 32 years old, in a luxury hotel suite and hauled before a criminal court in New York today for his actions.

The paralysis that seems to have gripped a France confronted with images of Dominique Strauss-Kahn in court in New York, lined up bet 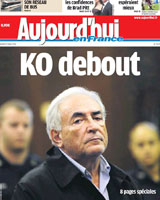 ween petty criminals and drug traffickers, must also serve as a harsh reminder of reality.

Yes, one of the most influential, most powerful, most popular men in the world must answer for his conduct as an ordinary citizen. This is a good news story, even if our weary country has become accustomed to considering impunity – sometimes falsely – to be a privilege due to the mighty.

Yes, it can be interpreted as “a nightmare” (Pierre Moscovici), “a cruelty” (Elisabeth Guigou), “a Greek tragedy degraded into an American television series” (François Bayrou). But the symbolic violence of these images of a handcuffed and stripped DSK echoes the all too real physical violence that is attempted rape. And the complaint brought by the prosecutor suggests, in its brutal phrasing, what that violence might have been. Yes, there is a defendant who is presumed innocent, and no one doubts the right to that presumption. But yes, there is also a woman who is presumed to be a victim, and no one can overlook her, either.

The Socialist Party, whose leaders are meeting this Tuesday for a special session, has already committed two serious errors of judgement regarding the scope and consequences of this case.

1 . The first error comes from the entourage closest to Dominique Strauss-Kahn. It consists of a blind defence of the accused, without any distancing, which only risks amplifying the malaise. Relativising the indictment, feeding the conspiracy scenarios, denying outright or abruptly declaring “numerous inconsistencies in the record” in implying that the case is already falling apart is certainly not the best strategy for showing support for the person of Dominique Strauss-Kahn.

For this brutal denial, fuelled too by a peculiar picture being drawn for us once again of a Dominique Strauss-Kahn who is “seductive”, “a free-thinker”, “a lover of women” risks provoking some awful doubts about the years before today. The head of the IMF now stands accused of being a “sexual predator”, in the vocabulary of crime. Till now those close to him were saying “seducer.” Was that a euphemism to mask a wholly different reality? The question is devastating, but unfortunately it will not stop being asked. 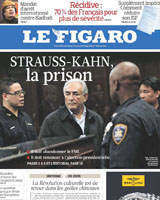 It already is being asked. On Sunday night, Tristane Banon’s mother revealed that she had discouraged her daughter, a journalist turned author, from filing charges against Dominique Strauss-Kahn for an attempted rape in 2002. The mother, Anne Mansouret, a regional socialist official and councillor, and friend of the Strauss-Kahn family, said today that she regrets her attitude. Regarding DSK, she adds: “He has a real problem – an addiction to sex, like others have to alcohol, drugs or gambling.”

Some resent the sudden resurgence of this story, (here, Bernard-Henri Levy, for example). But that is to forget that the statute of limitations has been set at ten years for such deeds precisely because of the difficulties victims have in demanding redress in such cases.

There are also questions the press will have to answer about possible breaches of its duty to inform, about its silences or – again – about the euphemisms it used to portray a man in the public eye. That respect for privacy must be fiercely defended is obvious, for it protects the freedom of us all. But this respect ends where the violation of the law begins: the legitimate taboo against invasion of privacy does not cover crimes or misdemeanors. For years, however, many journalists have described the life of Dominique Strauss-Kahn with prudent gaps. Have they failed in what is one of their obligations, the duty to warn?

Journalist Christophe Deloire, author of Sexus Politicus, thinks so and explains why, here in a forum entitled “The Strange Omerta (code of silence) in the DSK Affair.” In 2008, passing on the warning made by Jean Quatremer in Libération, Mediapart posed the political question that lies squarely at the crossroads of private passions and public virtue: was it not taking an unheard-of political risk to promote, in a world of Anglo-Saxon culture, an official known for this “sex addiction” as described by the mother of Tristane Banon?

2 . The second error is the directly political one that comes down from the leadership of the Socialist Party. “The party is neither weakened nor decapitated,” is how the party’s No. 2, Harlem Désir, sums it up against all the evidence.

One can without much difficulty grasp that a lock-jawed leftwing party will cling on to some automation of thought when a huge chasm opens up beneath its feet. But again, the strategy to deny the onrush of a new reality guarantees defeat.

This line could be tenable if the first political impact of the Strauss-Kahn affair was not the demolishing of the Potemkin villages carefully erected by the leadership of the PS following its congress in Reims in 2008. Three years later, it all appears to have been a bubble inflated by pollsters and enthusiastic editorialists rallying around the IMF chief and presenting the candidacy of Dominique Strauss-Kahn as key to the party’s success in 2012. Martine Aubry can praise the work done over the last three years: a party in order, at peace, and a programme and procedure for choosing the candidate. But we are actually inside a skilfully constructed optical illusion, as quite another movie was planned – one that would take DSK to the Elysée.

The Strauss-Kahn affair is the final warning for a PS that has failed till now to meet the challenge of Sarkozyism. If they fail to grasp it, the leaders will bear a heavy responsibility for the failure of the left and the decline of France.

Translated from the French by Anton Baer