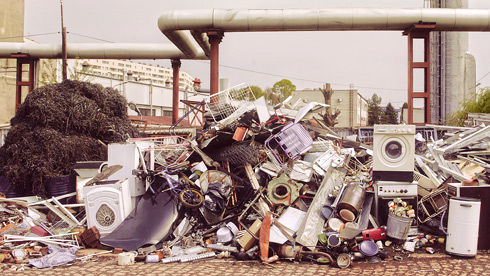 Consigning waste to the scrapheap

Eager consumers and producers of enormous quantities of waste, Poles are coming under pressure from the EU and will soon convert to a new approach to packaging – the religion of "re": reduction, recycling and reuse.

This year, the atavistic domestic spring cleaning has been accompanied by controversy over waste. Alongside 10 other countries, Poland has been lambasted by the EU for its mess, dirt and excess waste.

This raises a question that is natural, urgent perhaps, but strangely seldom asked. Do we really have to generate so much rubbish? Or, from a slightly different perspective: has modern civilisation succumbed to an obsession with things that will eventually be its own undoing?

Today’s humans drag plastic-wrapped food and bottled water into their caves, even though they have efficient waterworks. They often drag too much, because there has been a sale, a clearance, because it’s cheaper in a six-pack, because you cannot have too much of a good thing.

Our parents or grandparents bought the first TV sets with promises they would last a lifetime, while the lifetime of the first generation of mobile phones was estimated at 10 years. Today’s tablet computer is already outdated when you buy it.

Researchers have called the contemporary western individual “a consumer of novelty”. They have labelled Poland’s progress in the last two decades “imitative modernisation”. People had always desired things and accumulated them; Poland’s transition to capitalism meant only a new, more intense, truly American version of materialist craving.

As a nation, Poles remain afflicted by the syndrome of fledgling consumerism: to buy, to have, to throw away, to buy new, cheap, so cheap it’s a sin not to buy it.

“In Poland, material culture was plagued by constant deficits, so utilitarian objects virtually never lost their practical value”, says Włodzimierz Pessel, professor of cultural anthropology at the University of Warsaw, who specialises in “garbology” (the scientific study of refuse and waste) and has conducted research in Poland and Scandinavia.

The Polish predilection for collecting junk, a tendency to preserve things and never throw anything away, argues Mr Pessel, stems from a long tradition of makeshift solutions and temporary housing, an experience shared by millions of Poles, deported, resettled and expropriated over centuries. The history of Poland is a history of constant reconstruction and knocking-together.

The reduction, recycling, reanimation and reuse of waste is an official religion in the western part of the EU. One enforced with utmost seriousness. If you put out your rubbish bag at the wrong time or throw glass jars into the plastics bin, you are fined. They morally harass and stigmatise you. They also spread a pesky propaganda of cleanliness and order, building temples of nice, healthy living – ski slopes, viewing platforms and cosy cafes – around state-of-the-art incineration plants and on long-closed rubbish tips.

In the western EU, the collection points where the waste electrical and electronic equipment (WEEE) is recycled are virtually surrounded with all kinds of barriers to prevent people offloading any items into the wrong category. In Poland, the barriers are there to prevent theft.

In Germany, about half of all waste is recycled and the ambition is to raise the proportion to 75 per cent in the near future. In Poland, the recycling rate is at 5-10 per cent, lower than in any other EU country except Romania and Latvia.

Will the “re” religion replace the teaching of capitalism, the dogma of constant production, of replacing good with better – even if it only seem to be better? To replace the durable with less durable? The greatest thinkers of our day are pondering over the future of a world preoccupied with the recycling of masses of constantly generated waste. Most believe that capitalism is unsinkable and that the distinguishing feature of the so-called late post-modernity is that it cannot end.

But modern-day capitalism would not be propagating the religion of “Re” at its own disadvantage or purely for nature’s sake. As someone said, “sticking a hand into the rubbish, you can also grab profit”. The Norwegians have calculated that 4 tonnes of waste generate earnings equivalent to 1 tonne of oil. And it’s a policy they will stick to. Waste is not just civilisation’s by-product, it is also a huge and growing business, where you make money both through producing junk and recycling it.

The regulations being currently introduced in Poland will inevitably cause many to revolt. To pay more for something that you throw away forever is quite a shock. To stop offloading waste by night into the nearest woods or river and instead develop and successfully implement a local-level solution – that’s almost utopia. Add the daily ritual of classifying and selecting the containers, boxes, bottles, cans and bags – and you are looking at revolutionisng an entire mindset.

It would be good if the junk revolution pushed Poland from its current level of young consumerism to a higher one – less predatory and less thoughtless. It’s probably high time we stuck our hands into our own rubbish.

The problem of recycling waste “plagues Eastern Europe”, and especially Romania, writes Money Express.] The monthly economic magazine cites a 2010 study that revealed that “fridges, TVs, vacuum cleaners and even light bulbs that no longer work are becoming objects that hang around the house.” –

This is not only because people do not know what to do with them when they stop working, but also because retail incentive programmes, which offered discounts off the purchase price if a broken object in the same category was brought in for proper disposal, abruptly stopped in 2010.

And so, the magazine stresses, recycling is now part of Romania’s European Union obligations. In 2012 the EU issued a directive that introduced new standards for WEEE (Waste Electrical and Electronic Equipment) collection and set a collection rate of 45 per cent annually for the period 2016-2019. “Member countries have 18 months to introduce it into their own legislation, under penalty of sanctions that can reach €200,000 per day”, notes Money Express.