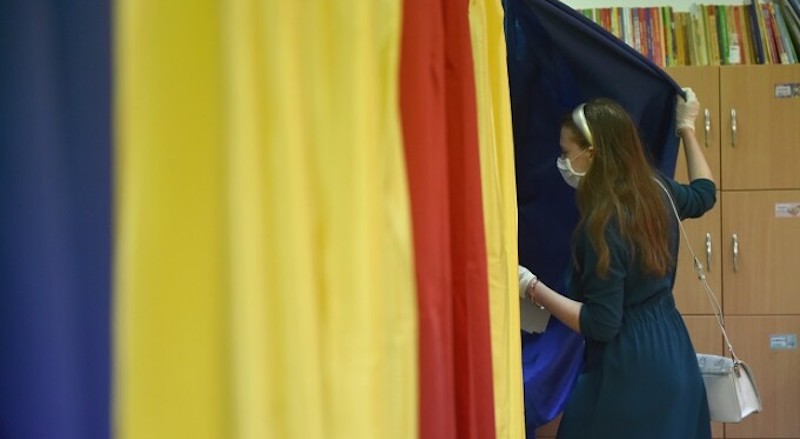 Romanians go to polls amid pandemic discontent, just as Moldovans did earlier

The ruling Liberals might pay the highest political cost for lockdowns and poor communication skills before the 6 December parliamentary election. In neighbouring Moldova, outgoing president Igor Dodon lost his job in a similar context, reports Madalin Necsutu from Bucharest.

For Laura, a 37-year-old entrepreneur in the educational sector, the Covid-19 pandemic brought her business to the brink of bankruptcy. She owns a Japanese Abacus and Mental Arithmetic Educational Centre for children in Ploiesti, 60 kilometres from Bucharest.

"The pandemic period was extraordinarily stressful and full of unknown situations. We had to immediately find solutions to move the courses online, to reorganize the schedule, to use social media accounts and platforms, and to communicate quickly and efficiently with the parents," she told me.

With close to half a million citizens infected with the new coronavirus, and a death toll which has risen to 11,000 since March, Romania is facing a challenging situation coping with the pandemic.

In mid-March, the Romanian government ordered a total lockdown. Laura was only able to reopen her centre in August. More than half the enrolled children withdrew immediately, as their parents were not open to continue with online courses.

For her business, the state financial aid consisted of some subsidies to keep her employees. Still, the rent, utilities and technical support for moving courses online was a significant challenge for Laura. The state did not cover her biggest losses at all.

"I was worried every day if we would manage at least to close the month on zero profit," she added.

She had to improvise and cut expenses, but it was tough because she could not make changes to already-signed contracts.

"Unfortunately, this period is not over yet. I watch the news daily to see if we will need to close again or not. The stress is enormous. The fear of losing everything is overwhelming," said the entrepreneur and teacher.

Laura is disappointed by the centre-right government.n her opinion it acted more like a leftist one, giving almost no help to the entrepreneurs who keep the economy running.

Within the EU’s guidelines

The Bucharest authorities have managed the pandemic broadly within EU guidelines. However, the overlap of the crisis with elections made the situation particularly difficult for the present centre-right liberal government led by Ludovic Orban.

In February 2020, before the coronavirus pandemic hit Europe, surveys showed 47 -percent support for the National Liberal Party (PNL). By April 2020 it had dropped to 33 percent. PNL’s main rival the centre-left Social Democratic Party (PSD) rose from 20.6 to 24.8 percent in the same period.

Romanians broadly saw the Orban cabinet’s decisions as following electoral calculations rather than health-related ones, which fuelled discontent.

Romania held local elections in June, which were won by the governing PNL, with 29.78 percent The PSD followed with 23.16 percent, while  Save Romanian Union (USR) scored 8.89 percent.

Only 46.02 percent of Romania’s 18.3 million eligible voters went to the polls.

The result of the parliamentary elections on 6 December is difficult to predict. The Liberal Party will have to face the consequences of unpopular lockdowns as well as the rage of business owners who had to shut down their businesses.

"As we approach the end of 2020, we can already say that there is a general state of irritation among the population, which is waiting for solutions to resume its normal life and daily routine," the political expert Mihai Isac told me. He argues that the economic and psychological pressure is high, and this might reflect on the scores at the parliamentary election.

Surveys conducted by polling institutes working for major political parties say that the PNL will score between 25 and 28 percent, PSD 21-24 percent, and the alliance USR-PLUS, 20-23 percent, according to Deutsche Welle.

In other words, the pandemic will have almost halved the electoral score of the governing party.

"Confidence in the authorities is also undermined by suspicions of corruption and poor communication," stressed Isac.

In addition PNL will face judgement for a fire which burned down the Covid-19 ward at Piatra Neamt Emergency Hospital in the eastern part of Romania. So far twelve patients have died as a result of the fire.

The recent incident reawakes the outrage of Romanians following a similar disaster in a nightclub in Bucharest on 30 October 2015, when 65 young people died. The slogan "Corruption Kills!" became immediately associated with the incident, and concerned the entire political class in Romania following the Revolution in 1989.

This new episode in Piatra Neamt Emergency Hospital will figure as a  similar emotional trigger ahead of the parliamentary vote, together with the poor government communication surrounding lockdowns.

Across the Prut River, the Moldovan authorities have managed the pandemic even less well, being in full campaign mode since March.

The now acting pro-Russian president Igor Dodon lost the 15 November presidential elections mainly on corruption grounds, but also he also showed a lack of empathy and poor management of the pandemic, which hit Moldova hard. The opposition pro-European candidate, Maia Sandu, won the election in Moldova by a wide margin, scoring 57.63 percent in the run-off, to Dodon’s 42.37 percent.

"In Moldova, the pandemic has been managed in a political and populist manner. The medical crisis was not managed by doctors, but by politicians in a more campaign logic. Today, the results are obvious regarding the incidence of positive Covid-19 tests, which has reached almost 50 percent," said Ion Tabarta, a political analyst from IDIS "Viitorul", a Chisinau-based NGO.

Dodon wanted to show that he could manage the crisis and that the coronavirus pandemic would turn out to be something seasonal. "He believed it could turn crisis management into a political victory. When he noticed in the autumn that the strategy was failing, Dodon tried to break away from the government and the medical system, but it was too late," added Tabarta.

Total coronavirus infections have reached 102,894 in Moldova and the death toll stands at over 2,200. In mid-September Moldova reached 5th place in Europe for per-capita Covid-19 cases.

"The impact of governmental policies on the pandemic is much worse than in other countries. The authorities did not do what they should have done from the beginning and sought excuses, pointing to the bad situation in other countries, instead of focusing on what they should have done here," the WHO expert and former Health Minister, Ala Nemerenco, told me.

She stressed that Moldova is seeing a continuous rise in Covid-19 cases, and that this is affecting politics.. "Yes, it especially influenced the result for Dodon. If the current government of Ion Chicu, appointed by Dodon, had managed at least satisfactorily the pandemic, maybe things would have been different. People blamed Dodon for many mistakes, and one of the most important was pandemic crisis management," she concluded.