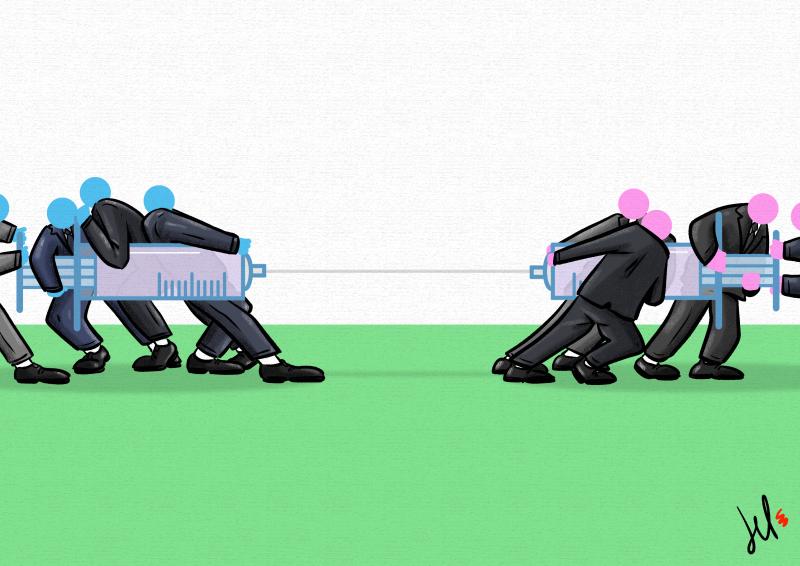 Why we need People Power to get a people’s vaccine

The patents that protect the Coronavirus vaccines developed by big pharmaceutical companies are the main obstacle to the vaccination of populations in developing countries and to halt the pandemic. This is why several organisations are calling on Brussels to stop defending intellectual property rights on vaccines.

More than a year after the start of the pandemic, the coronavirus killed over 3 million people, caused the greatest economic crisis since the 1930s and and had a devastating effect on the lives of billions of people. UNICEF warns for a lost generation due to malnutrition, the sudden withdrawal of education and widespread fear and uncertainty.

Vaccinations are a critical part of the solution to end this. While most Europeans are eagerly looking forward to the moment when we can all safely return to our lives, for most developing countries this is a far of dream: if nothing changes, the current vaccine shortage means it might take up to 2023 before everyone around the world has access to protection - and worse, we might never get control of the virus, since the current vaccines might be ineffective against new variants.

However, there is a solution: increase vaccine production by making them a universal, public good. In times of crisis, it should be evident to temporarily override intellectual property rights and give all trustable vaccine producers the right and existing knowledge to make vaccines, tests and treatments on a large scale worldwide, faster, easier, cheaper.

However, to that end, the European Commission would have to drastically change the way it is treating pharmaceutical companies at the moment. And here lies the issue.

According to Corporate Europe Observatory, the European Federation of Pharmaceutical Industries and Associations (EFPIA), Big Pharma's main lobby group in Europe, spend up to 5,5 million euros on lobbying activities– in 2020 alone. A fine investment: their arguments to – paraphrasing – "keep the patents in our hands, and trust them to distribute vaccines" has been taken over blindly by the European Commission, and contrast sharply with the current state-of-affairs.

This 'voluntary commitment' has proven highly naïve: the World Health Organization has established a platform where pharmaceutical institutions can share their knowledge and property rights. Such an approach previously ensured that medicines against HIV/AIDS became available in many more places. But this “knowledge bank” against corona is still empty. The shelves are collecting dust. Pharmaceutical companies are keeping the technology to themselves, since no contract is forcing them to do so.

So why would they? Patents allow companies to sell the products they develop at a profit, and to control who gets to make and sell them.

For them, the pandemic is a feist. The People’s Vaccine Alliance calculated that Pfizer, Johnson & Johnson and AstraZeneca have paid out $26 billion in dividends and stock buybacks to their shareholders in the past 12 months - enough to pay to vaccinate the equivalent of the population of Africa.
For Pfizer, things are never enough, since it is increasing its price per dose from 12,5 to 19 euro per dose.

Despite the promise to make vaccines available to everyone, the European Commission is not making any move to make this a reality. We call on Europe and all its member states to join the nearly 100 countries and countless civil society organizations to support the temporary patent waiver in the World Trade Organisation. Even the US, a notorious adversary, is now considering joining its advocates.

However, Europe will not be convinced by itself. In face of 'Big Pharma's huge financial power, we need to build up people power. A European Citizens' Initiative is one of the very rare official methods to directly impact European policies. Thanks to this official tool, the European Commission is obligated to respond to our demands once we collect 1 million signatures.

The No Profit on Pandemic initiative calls on the European Commission to make corona vaccines and treatments a universal common good, and demands full transparency on the negotiations, purchase prices and production costs. Our movement counts over 350 European trade unions, health associations and NGOs, and 175.000 European citizens – so far.

A Europewide mobilisation is necessary to change the course of history. Profits are an obstacle to protecting the security of the world's population and the future of entire generations. But we can change that.

All EU citizens can sign the European Citizens' Initiative via noprofitonpandemic.eu.

👉 Check out the list of members of the No profit on pandemic coalition.