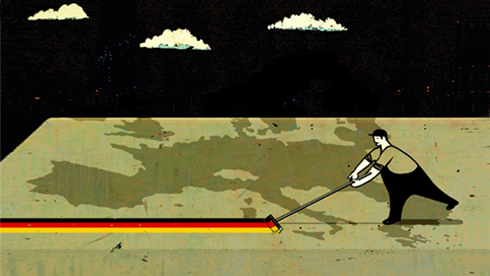 A hegemonic power, but one which, in view of its past, is fearful of the idea of its dominance. Willing, but cautious to the point of neurasthenia. On the eve of elections in the Federal Republic, difficulties in understanding Germany have contributed to an abundance of platitudes and evasive definitions of the country circulated by its neighbours.

They are attempts to conduct a psychological analysis of an obvious and pervasive power, one that Berlin is careful to keep hidden, which other capitals in the Union are unable to counter. All of Europe, which has been fed on these stereotypes since the outbreak of the crisis, is passively awaiting the outcome of this month’s vote. The renewal of the German parliament on September 22 will take place just a few months before European elections at the end of May. And within the Union, it is seen as the first act of a drama that concerns the continent, and which has as its protagonist a sick democracy in Europe.

Amid the welter of clichés, the prospect of this drama has led to the invention of another narrative in Germany. The tale tells of a Germany – still the "pale mother" of Brecht’s poem – that is tired of being the object of "scorn and fear" among nations. Lucid in her judgements and devoted to the cause of Europe, this Germany is hampered by the nationalism of her neighbours, led by France. In the pages of The Guardian, Finance Minister Wolfgang Schäuble corroborated this imaginary tale: "We do not want a German Europe. We are not asking others to be like us." However, the Germans are very strong-willed, much more than they would like to admit. Wolfgang Schäuble urges his partners to avoid recourse to national stereotypes, but his reasoning, his downplaying [of Germany’s role], have also become stereotypes. The passive wait for the vote in Germany is confirmation of a hegemonic power that is deemed to be unchanging, and inescapable: just like the austerity policies that the sole voice of Berlin has imposed on all of the nations of the Union.

The most lucid analysis of this state of affairs has been put forward by German intellectuals – the philosophers Jürgen Habermas and Ulrich Beck, writer Robert Menasse, and former minister of foreign affairs Joschka Fischer. Since the onset of the crisis, they have deplored the nationalist regression of their country. Among the political parties, only the Greens have presented their own diagnosis. One of their leaders, Joschka Fischer, has accused the government of raising the spectre of “the German question”, more than 60 years after it had been laid to rest. Angela Merkel is suspected of wanting to return to a Europe of sovereign states: the same Europe based on a balance of powers that was rocked by the wars of past centuries, whose restoration the launch of the European Community was designed to prevent.

These suspicions are not unfounded. [[The Chancellor has progressively abandoned the pro-European position that she professed in 2012]], and set about closing the doors she had previously left ajar. In so doing, she has rapidly adapted to the rise of neo-nationalism (the recently launched party Alternative for Germany (AfD) which has been recruiting on the right and the left). Her speeches and her actions "lack any normative core," complains Jürgen Habermas. This is the reason why she rallied to support [British Prime Minister] David Cameron when he imposed a veto on any increase to the EU’s budget: together they ruled out the introduction of European policy to counter the effects of austerity. Speaking on German television on August 13, the Chancellor unburdened herself further: "Europe should be better coordinated, but I do not believe that everything should be done in Brussels. The repatriation of competencies to member states should be examined. We will talk about it after the elections."

For Austrian writer Robert Menasse, the problems affecting the euro are closely linked to the role of democracy and thus more political than economic: they are inherent in the powers that states are in the process of repatriating – a campaign of reconquest that commenced in 2007 when the Lisbon Treaty was introduced instead of a previously mooted federal constitution. Since this date, member states – councils of ministers, and summits of heads of state and government – have begun to regain control, laying claim to an illusory but no less pompous sovereignty, which has increasingly undermined supranational institutions. The defects in the conception of the euro caused by the political and economic union are well known. But we have responded to these defects by reinforcing them, rather than reducing them.

[[In a Europe where nation states are in control, it is inevitable that the biggest economic power will call the shots]]. And so it does and not without guile, to the point where Ulrich Beck alludes to Machiavelli when describing the empire accidentally established by Berlin: "Just like Machiavelli, Angela Merkel has seized the opportunity that was handed to her – the crisis – to shake up power structures in Europe". The union is no longer a community when debt-sinners [in German, “debt” and “sin” are the same word] are labeled with the humiliating catch-all, "southern periphery of Europe." This is the reason for the evaporation of any "normative core" and the volatility of German positions: on the powers to be restored to national governments, on a European federation, and on a banking union, which was initially deemed to be desirable, but subsequently rejected to protect the interests of German banks.

In a word, as Ulrich Beck explains: "The prince, says Machiavelli, does not have to honour a political pledge made yesterday if it brings him no advantage today."

The isolationist leanings of the AfD have accelerated this regression. If the party wins seats in parliament, the face of the country will change, although it will not remain on the sidelines of Europe, as the United Kingdom has done: the principle of the country’s involvement in Europe is inscribed in article 23 of Germany’s basic law (which was redrafted in 1992), but the involvement prescribed is not federal.

The final platitude concerns memory. In Germany, political memory is fraught with blind spots. People remember inflation under Weimar, but not the deflation and the austerity under Chancellor Brüning (1930 to 1932), which paved the way for Adolf Hitler’s electoral success. People remember National Socialism but forget what came after it: the reduction of German debt, generously granted by 65 states including Greece in May 1953. Even the myth that Germany has learned the lessons of history must be partially dispelled, if we do not want a Europe that is divided between "favelas": between saints and sinners who at best “coordinate," and, in so doing, negligently set aside the notion of "community" that used to be their objective.