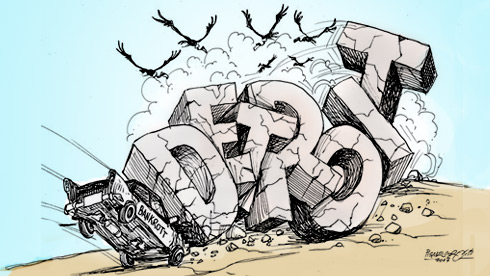 Europe ought to let its hopeless causes go bankrupt

The cure for the crisis is a dose of American-style tough love, writes Martin Sandbu.

The bankruptcy of the once great city of Detroit comes just a few years after that of General Motors, Motown’s legendary car manufacturer. Both collapses crystallise decades of accumulated failures, including a failure to look reality in the eye sooner.

They also symbolise the US’s big advantage over Europe: its greater willingness to let go of hopeless causes so that more successful activities have room to grow. The ability to let doomed ventures die is a sign of strength, not weakness. If Europe – especially the Eurozone – wants out of the crisis, it should adopt American-style tough love.

It is natural to be rattled when giants buckle. The liabilities restructured by GM amounted to $172bn (€130bn). Its host city faces debts of possibly $20bn, according to Detroit’s emergency manager Kevyn Orr. Much of this represents losses borne by people who were sure their claims would be honoured. That is no doubt unfair; and one cannot fault burned creditors for doing what they can to get others to make them whole, as Detroit unions now want the federal government to do.

By and large, however, the US is prepared to let the chips fall where they may; more so, anyway, than Europe. It was not always so – president Gerald Ford’s infamous “drop dead” to New York City (which he never really said) in 1975 ended with rescue loans anyway. But in the past few years, the US has pointed banks (Lehman Brothers and many smaller ones), other systemic corporations (the car industry) and many municipal governments to the nearest bankruptcy court.