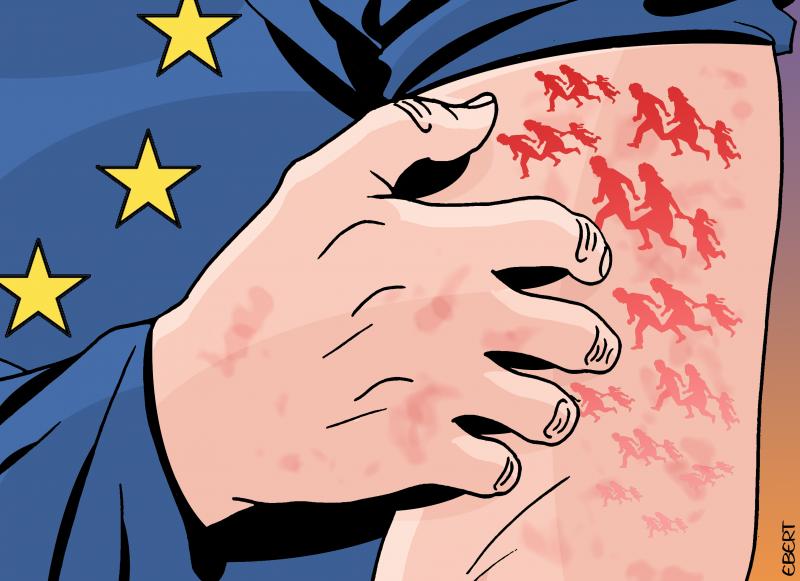 Refugees lawyers are witnessing ‘a devastating erosion of rights’

In this series of reports by Francesca Spinelli, we meet four categories of people who could be affected by the new Pact on Migration and Asylum, recently proposed by the European Commission. We start with European lawyers working on asylum and immigration.

Dominique Andrien forewarned me: like many lawyers working on immigration and asylum rights, he hasn’t had time to dive into the New Pact on Migration and Asylum, proposed by the European Commission on September 23. With an office in Liège, Belgium, Andrien began practicing law thirty years ago, when “it was rare for a lawyer to invoke European law”. Nowadays this law is omnipresent, but all the good it has brought – specifically the defence of the fundamental rights of foreign nationals – is often ignored by governments and national authorities. Meanwhile member states, through the Council of the EU, try their best to pack regulations and directives with political priorities that are irreconcilable with the fundamental rights upon which the EU was founded. Every new proposal of the Commission, resulting from watered-down compromise, is thus received with suspicion by lawyers.

Among these is Tristan Wibault, also from Belgium. “We’ll have to wait to see what becomes of the proposals contained in the pact”, he explains. “For now they seem in line with what’s already in place. Over the last few years we’ve witnessed a multiplication of procedures and cases where deadlines for appeals are shortened”. The pact proposes to further shorten these deadlines, particularly for asylum applications filed at the border.

The emphasis placed on borders is one of the most worrying things for Italian lawyer Anna Brambilla, member of the Association for Legal Immigration Studies (ASGI). Practicing in Italy as well as Greece, where she could test the Hotspot approach, Brambilla knows all too well the impact on human rights: “we used to be able to transmit legal advice directly, through meetings and interviews. Now it’s no longer possible. We’re obliged to find new ways to communicate, often informally. The problem is making it such that informally expressed desires can be considered valid: for example, formalising an application for protection”.

In the Commission’s latest proposal, Hotspots are a pillar of European migration and asylum policy, and of a massive operation sorting those who arrive at the EU’s external borders. “All this takes place behind closed doors, closed to lawyers. This even further undermines the right to a defence”, argues Brambilla.

Another new addition, “upsetting, not only from the legal point of view but also in the history of European asylum law, is the stress placed on the examination of admissibility – rather than merit – of an application for international protection. This gradual erosion of rights, already underway in Greece for example, had until now been stemmed in Italy by the constitution”.

Meanwhile, the Belgian constitution was invoked by Tristan Wibault and his colleague Pierre Robert in an application for annulment presented in 2018 by the forum of Francophone and Germanophone lawyers along with seven non-profits. In their still pending submission they denounce the overly complex procedures, short deadlines and weak procedural guarantees introduced in Belgian law following the transposition of two European directives from 2013 regarding applications for international protection.

While member states constitutions can stand as a barrier to “a devastating erosion of rights” promoted at the European level, as Brambilla defines it, in other cases it is in fact a European institution, the European Court of Justice, to which lawyers turn in the hope of obtaining confirmation of their interpretation of European law, when confronted with unreceptive tribunals and administrations. “There has been a series of decisions which have had a very positive impact on asylum applications”, says Wibault. “I’m thinking for example of the 2013 decision on protection on the basis of sexual orientation”. Andrien, meanwhile, cites the role of the Court of Justice in confirming that the right to an effective remedy (article 47 in the Charter of Fundamental Rights) is an integral part of EU law.

The role of the ECJ

The problem, says Andrien, is that “national legislation is rarely modified based on decisions by the Court of Justice”. The member states feign ignorance and pursue policies and procedures that are “misguided, distorted, and geared towards repression”. Wibault is disturbed by another trend, also relevant to the European Court of Human Rights: “recent sentences have been extremely cautious, seem to have been pre-established, or lacking in clarity. I think judges are not immune to the broader political context. After 2015 it was clear a new phase had begun. The member states dealt with immigration much more violently, and the judges went backwards. One Court of Justice decision I find incredible is the refusal to examine the legality of the accord between the EU and Turkey. It’s all so frustrating, but hopefully just a phase”.

Frustration is a sentiment that unites all three lawyers. As Brambilla says, “in our line of work, we’re always restricted, on the one hand, by European procedures which demand that everything moves fast and takes place behind closed doors; and, at the national level, extremely slow procedures that just grind people down”. As Andrien confirms, “for us lawyers, the deadlines are too short, while the administration and tribunals don’t respect any deadlines at all. The efficiency of procedures needs major improvement. There needs to be a power of direct injunction, forcing the state to respect the deadlines and decisions of the tribunals. Belgium was just condemned by the European Court of Human Rights for repatriating Sudanese nationals in 2017, despite a judge having forbidden expulsion. If the administration doesn’t respect the decisions of tribunals, where will we end up?”

One thing that doesn’t disturb these lawyers is the “constant” attacks by politicians. “Since 2010 the Belgian administration has written at least three times to the president of the bar to complain about my submissions”, smiles Andrien. “But intimidation doesn’t bother me in the slightest. In fact it means I must be doing a good job”.

Read the other articles in the series.