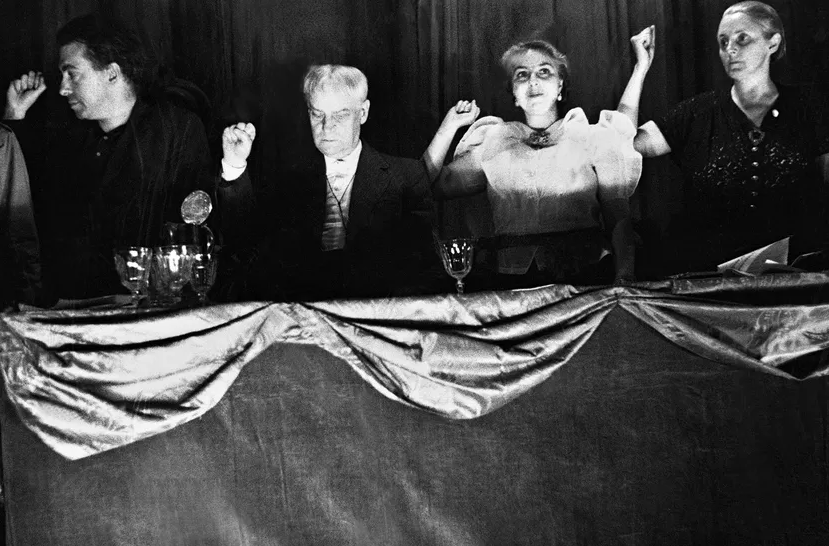 The future of Europe is a Republic of equals

After the pandemic, EU citizens must seize the moment to build a democracy of equals who share the same protections.

In 1933, the year of the Nazi takeover, the French writer Julien Benda (second from the left in this 1937 photo) wrote his Discourse to the European Nation, urging Europeans to come together around their shared universalist values and against the rising monsters of nationalism. As Europe marched towards the murder of its soul and its people, many dared to dream the impossible.

Benda was not alone. The Ventotene manifesto, one of the founding texts of European federalism, was drafted in 1941. And it was against the background of a continent in ruins that Churchill spoke of a “United States of Europe” in 1946. The rebirth of Europe would have been unthinkable if the flame of European unity had not been kept alive throughout the continent’s darkest hour.

While the challenge posed by Covid-19 has been compared to a war, we are thankfully very far from the murderous scenario of those years. And yet, the current crisis is drawing Europeans further apart and not closer together. Animosities and divisions grow – whether that is between the east and the west on democracy and the rule of law, or between the north and the south on economic solidarity.

Spaniards must not look at the threat of unemployment with any greater fear than the Dutch.

Europe was thought to advance through crises. Emergencies, so the argument went, would allow visionary politicians to overcome national resistance and bring the continent towards the “ever closer union” dreamed by its founders. But Europe has now been enmeshed in more than a decade of financial, political and humanitarian crises, and the result is constant and ever more worrisome disintegration.

The collapse of the European Union has been predicted for years. But Europe does not need to collapse to die. Europe dies when it just shrugs its shoulders at nation-first politics. Disintegration is not a single event, but rather a process marked by diminishing bonds, gradual loss of faith, and renationalisation of politics. Europe may end not with a bang but a whimper.

Fellow citizens: our national elites have failed us, and we must rescue the ideal of a united Europe from them. On 9 May, Europe Day, the European Union was planning on launching its Conference on the Future of Europe and opening a new chapter in the history of integration, following Brexit. These plans have now been delayed. And this may be just as well. The conference was structured to be yet another spectacle of top-down chatter without vision or ambition.

We call on you, on us all, to take the lead and keep the flame alive in these times of crisis. In place of another insignificant institutional conference, we call for the establishment of a European Citizens’ Congress on the Future of Europe, forming the basis of a modern constituent assembly. Such a congress would be a hybrid structure: falling somewhere between a social movement, a political actor and a deliberative platform, providing a rallying point for all those wishing to resist the path of disintegration.

It was similar congresses that decreed the enfranchisement of millions in South Africa and India over the last century. We, disenfranchised citizens of Europe, must now dare to demand and organise for the impossible: a European republic where all citizens are equal, independent of national affiliation. Where there is no question of some receiving generous aid and having access to exceptional healthcare, and others being left in misery and with overflowing hospitals.

Can there be such a thing as a European republic of equals, in such a diverse continent? Indeed, what defines a nation? A nation is neither ethnicity nor language, neither culture nor identity. A nation is a law that establishes a group of equals boasting common rights. It is, as the French sociologist Marcel Mauss wrote a century ago, a group that is collectively aware of its economic and social interdependence and that decides to transform this interdependence into collective control over the state and the economic system.

One welfare for all

Isn’t this exactly the juncture where Europe stands today? Are we prepared, as citizens of Europe, to take the necessary step towards such institutionalisation of solidarity, so that a Bulgarian and a Finn, a German and an Italian enjoy the same social protections, benefit from the same economic support and pay the same taxes? Are we willing to create, for the first time in history, a new democracy on a par with the global challenges banging on our doors? Are we ready to do so despite, and when necessary against, our own national governments?

We need one European social security number, a common European welfare that guarantees human dignity and security independent of nationality. Spaniards must not look at the threat of unemployment with any greater fear than the Dutch. Greeks must not look at the prospect of hospitalisation with any greater worry than a German. Liberté, égalité and fraternité, not sécurité, was the motto of the French revolution, which is the cultural and political heritage of all Europeans!

We need an impressive programme of ecological and economic transformation. We cannot let some countries drown in debt and let our union be mistaken for a committee of loan sharks while our environment collapses. Just as Roosevelt’s New Deal allowed for the creation of modern federal institutions in the United States, a real European Green Deal boasting significant federal resources would at once address the economic slump caused by Covid-19, alter our toxic production model and create the institutions for a genuine economic union.

We need a modernised common tax system for our companies as well as for us as European citizens. Modern European nations were built by centralising the power of taxation from the feudal regime. The opposite process is under way today, with European states played against each other by multinational corporations dodging paying their fair share. A common European tax on large assets, a redistribution of the profits of automation, and a common tax on the profits of multinationals would build a new, broad-based taxation from scratch, recovering resources that are currently unattainable.

Don’t let anyone convince you that any of this is inconceivable. For ours is a continent that time and again has shown that citizens’ power can make the impossible possible. On 20 June, 1789 in France the representatives of the third estate called themselves the National Assembly and swore not to separate until a constitution was established. The result was revolution and the birth of the modern French republic. Europe today needs its own Tennis Court Oath, a second peaceful revolution after the one of 1989, and the birth of its own republic.

As Julien Benda was fond of saying, emperors cannot produce Europe – only citizens can.

Original article at The Guardian.

Categories
Civil SocietyConference on the future of EuropeGovernance, Transparency, and corruption