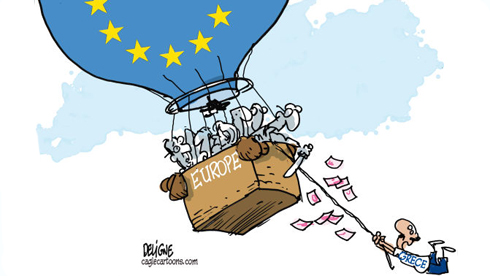 Greece sacrificed to save euro

The IMF bailout of Greece has above all allowed its creditors to dodge their responsibilities and guard against contagion. The Greeks should revolt and renegotiate the terms of the loan, writes To Vima.

It’s true, then. The aid plan was misrepresented from the start. A plan that has had devastating consequences. A plan that was supposed to “save" Greece, but was really about saving the euro – and by flattening Greece. Who said so? Well, one of the three members of the European Central Bank, European Union and International Monetary Fund (IMF) troika. The IMF criticised the fund’s partners as much as the fund itself, and the Greek government came under fire too. Together, they headed towards a disaster that had no other purpose than to win time for the other Eurozone countries.

The IMF document published on June 5 is a slap in the face for the “rescue” policy, but above all for “Europe” – that is, Germany – and for the Greek government at the time, led by Socialist George Papandreou, who signed the first memorandum.

They are not only wiping out [creditors], but are giving the impression of wanting to use the Greek crisis to shield and, finally, to reorganise the Eurozone, at the expense of Greece.

The documents are exasperating. The IMF admits the crime, but does not accept its responsibilities. It formally reveals the motives without explaining how the tragedy gripping the country – due not to the debt but to the rescue plan – might even be tackled once the errors have been recognised. The cynicism is overflowing...

And naturally, all this irreparably exposes the Greek political class, which argued for the aid plan and held it out as the sole salvation of the country. And that somehow forced Greece to comply with this recipe for suicide, using “rescue” as the alibi. A rescue that, as the IMF has admitted, has proved a disaster.

The political class did not fight for the interests of the country, but preferred instead to take the easy way and worried only about clinging onto power. Succumbing to a ghastly extortion, it was prepared to deliver up a little of the country's sovereignty.

If the Greek government had a modicum of respect both for the word “Greek” and the word “government", it would not turn a blind eye on the recent revelation from the IMF.

This time, it should answer this question. Is it possible that one of the three members of the international executive board that is exercising economic control over the country continues to follow its own path without provoking any reaction from [the Greek government]? This may be why this report has been produced and published: to give Athens the strength to question this path – or perhaps not. In any case, the idea that they have "suddenly accepted their error" is naive.

Greece should finally do something. What else is it waiting for? And if not now, when? And all those who were saying that this solution was a "rescue", or that Greece is itself responsible for its misfortune, and that the Greeks should put up with all this, should reconsider their opinion.

The creditors themselves have been self-critical. Well, let their supporters do the same... And let's see, finally, all together, how can we capitalise on this terrible hypothesis to put a brake on the disaster that was called a rescue. Even if it is far too late, because by now Greece has lost all its weapons. And that’s its own fault.

Governments are also to blame

After the publication of the IMF’s damning report on the Greek bailout “the EU commission is on the defensive,” headlines EUobserver, quoting the economic commissioner Olli Rehn’s spokesman, who argued that cutting the country's budget deficit and keeping it in the euro was "no mean feat."

But the troika is not solely responsible for the recession and social damage that followed the European bailouts, argues Il Sole-24 Ore.

The problem was not only with Greece, but also Ireland, Portugal, Spain, and even Italy. In all of these cases, the troika chose to put the full burden of adjustment on debtor countries’ shoulders, without considering that the fault lies not only with those people who take reckless loans, but also with those who provide them. If this attitude is understandable among institutions representing the creditors, such as the IMF and ECB, it is less so among national governments, who should have defended the debtors. Is it too much to ask for them to take their share of the blame?