Report Spain
People expelled from their homes camp outside a branch of Bankia in Madrid on October 25, 2012 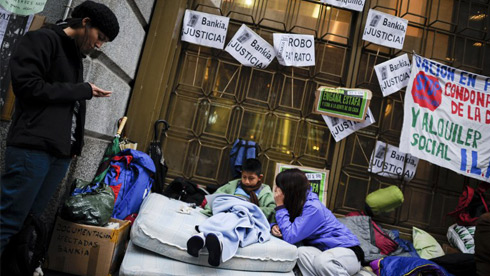 People expelled from their homes camp outside a branch of Bankia in Madrid on October 25, 2012

My name is Cristina Fallarás and I've become the most talked about evictee person in Spain. I would have preferred to talk about other things but the times, and the country, have forced this subject upon me. Last November 13, a Tuesday, at 7.40pm, a few hours before Spain's second general strike of the year, a person from Barcelona's 20th court ran the bell of my flat on Universidad Square.

We could hear the police helicopters and the first strikers with their firecrackers that always gave our home a festive air. At the precise moment when my son Lucas opened the door and said "Mummy, it's a man," I stopped being a writer, a journalist and a publisher, to become an evictee who could testify about it in writing and explain it in front of a camera. A live report, in the first person, it is practical and it hits home. The Holy Trinity of journalism: object, subject and analysis, three in one.

Now, readers, imagine a field as big as a country, with a surface like a wide rolling meadow.

Stop everything and go ahead. Imagine it.

Are you there? Alright, now look at the crevasse – huge, unrelenting and brutal – as if gouged by the fingernail of a god, tearing the earth, cutting the surface in two. A chill wind emanates from the crevasse; it is the breath of Fate.[[Look again: just as suddenly one of the banks is collapsing into the void and is suspended in the dark]], dragging in its fall all of its inhabitants, stunned and bewildered. And gnawed by guilt.

The other half of this land that you have imagined, and that we will call Spain, remains on the brink, fearing they will incur the same fate, expecting it, even, but in a less serious form: cuts in health benefits, slashed welfare payments, rescinded recently acquired rights for women, pay cuts... Their discontent is comprehensible. But in less time than it took the country to declare that its democracy is as indestructible as it is a sham, the inhabitants of the collapsed block find themselves deprived of everything. They would gladly give their health and future for the crumbs those on top are deprived of.

I'm writing from down below, from the collapsed part. I've been living in the dark for so long that my eyes are getting used to the gloom and I can clearly see the new arrivals. In 2009 and 2010, 2 million workers joined the ranks of the unemployed. Now, they get nothing; benefits are awarded for only two years in Spain. Since 2011, hundreds of thousands of unemployed people have joined us. We see them fall, we make room for them. We know, as they do, that it is inevitable.

From here, we can barely see those that remain on top, we have to strain our memory. We know how they live, what they eat, what they buy, how they dress and move because we were up there not so long ago. But misery imposes selective amnesia and I think that is a small part of our salvation. Those on top, on the other hand, do not look at us. They can't. There remain the journalists, the informers who try in vain to report on poverty, on evictions, the reasons for suicides. But how can they? [[If you have never had the electricity or the water cut off – or both – then your idea of poverty is without substance]]. That is why I am useful to you today. This is the story of an evictee.

Of course, I am surprised to be here, down below. An eviction is a very long process that begins with a layoff, yet which takes you by surprise – as if you suddenly found yourself naked. Totally nude, in the middle of that wide avenue that we used to take at dawn in a taxi, doubled up with laughter, tipsy.

Every day, towards 6am, the radio on my night table comes on and one phrase slaps me in the face and propels me into the shower: Earn a living! Living is not a given, it must be earned. And if you don't earn it, do you lose it? And each day it takes me by surprise, totally naked.

This article was first published in Spanish on December 12, 2012, in the Argentine online review Anfibia