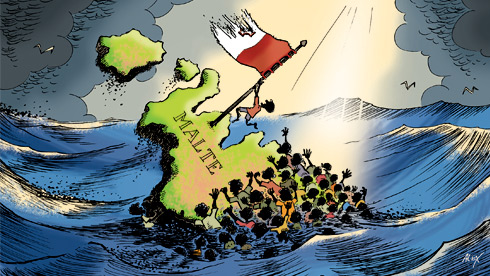 The tiny island of Malta is confronted to thousands of African migrants who brave the Mediterranean to reach its shores and a gateway to the EU. Pleas for EU help have so far fallen on deaf ears, but Brussels must now intervene.

At the end of July, a rubber dinghy overloaded with refugees attempting to flee Africa for the safety of Europe ran into difficulty. As the boat – travelling from Libya to the EU's smallest state, Malta – began to sink, the Maltese army launched a 13-hour overnight operation to rescue the 112 passengers. Eight were airlifted to hospital for emergency treatment; the rest were suffering from exhaustion, dehydration and sunstroke.

This story is not unusual. Each week similar boats arrive on the country's shores. Last month, the prime minister, Joseph Muscat, attempted to send two planeloads of Somali migrants back to Africa, without hearing their pleas for asylum – echoing recent suggestions of a "tow-back" policy in Australia – before the European court of human rights (ECHR) issued an interim ruling that this would be illegal. (Muscat has since said that he was never going to follow through with the push back; it was merely a stunt intended to provoke the EU into action).

Whether or not it was a stunt, the move reflects a government in despair. Before Malta joined the EU in 2004, immigration levels were negligible. Because it is located close to north Africa, it has now become a gateway for migrants seeking entry to Europe. In relation to its population, it receives the highest number of asylum applications in the world. This is partly because it's so small – smaller than the Isle of Wight. The 17,000 undocumented migrants who have arrived in the last decade are equivalent to 2.7 million landing in Britain. Read full article at The Guardian

Malta's refusal to allow a group of 102 illegal migrants to land on its shores on the night of August 5-6, triggered a power struggle with the European Commission and "illustrates the failures of the community's policy in the matter," writes Belgian daily La Libre Belgique. The urgency of the humanitarian situation was stressed by the European Commissioner for Internal Affairs, Cecilia Malmström, who added that sending migrants towards Libya could be a violation of the principal of non-refoulement as specified in EU and international law, which prohibits returning a victim of persecution to their persecutor, often a state.

The paper adds that the Maltese government is holding fast to its position and says it acted legally. This is not the first such refusal, La Libre Belgique reports, adding that the management of asylum requests, while in theory harmonised, varies from one EU member state to another. Some of these, in fact, "are no longer hiding their will to violate the commitments made within the framework of the Geneva Convention" on refugees.