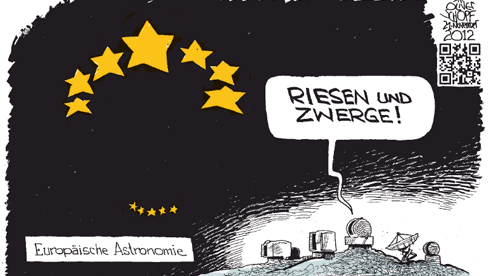 The EU spends a third of its budget to try to narrow the gap between rich and poor in Europe. Despite the billions from Brussels, though, the poorer countries have not caught up. Could the 27 please rethink that when they discuss the EU budget?

However the negotiations on the EU budget turn out, it is quite likely that, as with other budget items, the EU Cohesion Fund will be scaled back over the next few years. At the same time we can assume that the funds, a pillar of EU policy for decades, will by and large survive. Neither the sum nor the strategies of the programme, administered by the Austrian Johannes Hahn, will change much.

This could be the chance, though, to discuss the overall cohesion policy, which eats up about a third of the EU budget. The purpose of the so-called structural funds is to reduce the disparities between rich and poor in the Union, so boosting productivity and spurring economic growth in the less developed regions. For decades the main beneficiaries have been the southern Europeans – that Austria’s Burgenland also got nearly a billion euros was more of a sweetener than a necessity. Since the enlargement to the east, the ex-communist countries are also hoping for the windfall from Brussels.

As pleasant as it is for individual states to have vital infrastructure projects co-financed from the outside, the economic balance works out rather miserably: despite all the aid, the gap between northern and southern Europe has not shrunk. The poorer countries have indeed grown stronger in a few short years, but when it comes to productivity and competitiveness they are still lagging behind.

The short-term economic boom was paid for mainly by debt, and now in the crisis the gap is again widening sharply. The European debt crisis also signals the failure of the entire European policy of convergence, to which the Cohesion Fund belongs.

One can clearly see from just this tool alone that money does not always pave the way to prosperity. Most of the funding flows down the traditional routes. While better roads and railways do increase the productivity of an economy, other factors, like education, entrepreneurship, and legal certainty, are much more significant.

The EU funds have indeed created jobs and strengthened purchasing power in the recipient countries, but they have failed to correct those countries’ structural flaws. In fact, they did the opposite: by helping to conceal the flaws, they contributed to delaying the reforms that are needed.

These programmes proved to be particularly useless in the eurozone crisis. A monetary union needs generous transfers to correct imbalances. However, since the deployment of the structural funds is scheduled years in advance, the recipient countries have to set aside a great deal of capital of their own for the so-called co-financing, which makes that money unavailable just when it is really needed – around now, for example, to tackle youth unemployment in Spain or Portugal.

A meaningful reform would see the EU stop financing more roads and bridges and start instead to create a genuine crisis fund that responds flexibly to the needs of Member States and that could now balance out the rigours of austerity. For the Eastern Europeans, though, that would be unacceptable, even if they benefit from the Cohesion Funds less than was thought. In a EU that measures political success only by how much a country pays in and cashes out, such a paradigm shift is unfortunately unimaginable.

Why demand more money from the EU if the funds are not spent correctly? The answer lies in motorways, explains Romanian newssite Gândul, comparing the state of the Romanian motorway network – and its financing – with that of Poland. In Romania, there are only 516 kilometres of motorway, half of which were opened to traffic after the country joined the EU in 2007. In comparison, Poland, a champion in matters of absorption of EU funds, has built approximately 1,300 kilometres of motorway financed by 6 billion euros in European funds. That leads Polish daily Dziennik Gazeta Prawna to note that —

When decent infrastructure is finally built in our country, that will open opportunities for making money not only for Polish, but also for EU companies. So money invested in the cohesion policy is a good investment for the entire Union, not only for us. This is not simply aid to the poor, something that societies of the old Union are more and more reluctant to give.