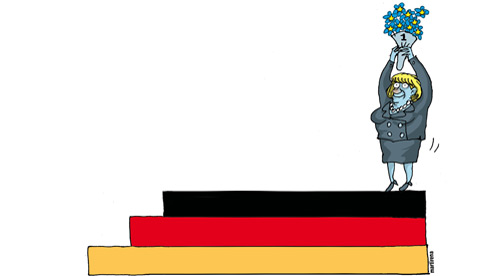 More indispensable than ever

After her undisputed victory in the September 22 elections, Angela Merkel is now headlong into finding new political partners with whom to govern. But regardless of who makes up the coalition, she will wield a mighty power that comes from her country’s position in Europe.

The Germans have voted. Their European partners, who allegedly awaited the elections to a new Bundestag with the nervousness of an Englishman awaiting the penalty shootout in a major international football match, can breathe out again: it is over and done with, even if the most exciting phase for both players and onlookers – the cobbling together of a new government in Berlin – is still to come.

The tension that lies in the question of who is likely to end up holding the reins of political power in the heart of Europe is not unjustified. It is bound up, after all, with the events and the experiences of the past four years, stamped by the European sovereign debt crisis, by the worry over the state of the monetary union and the row over how the euro could be permanently secured. Germany has played an important role in that, a role many would label as critical and dominant.

Reforms, but with whom?

after this electoral victory, the Chancellor has nothing to lose. She should use the next few years in power to undertake reforms in Europe and in her country. The Germans like Merkel because she is discrete and seems to do her job without narcissism and without bothering her fellow citizens. But will this be enough?

“Angie” is certainly in position to form a government but “Who still wants to form a coalition with Merkel?” wonders German weekly Stern, because the Chancellor is in the habit of crushing her coalition partners:

following the 2009 Grand Coalition, the Social Democrats [SPD] fell; in 2013, it has cost the liberals [FDP] their seats in Parliament. It would therefore be a great challenge for the SPD to convince its members to form a new grand coalition. Yet, it is the most probable of solutions, given the red [left] – green majority in the Bundesrat [the upper-house of parliament].