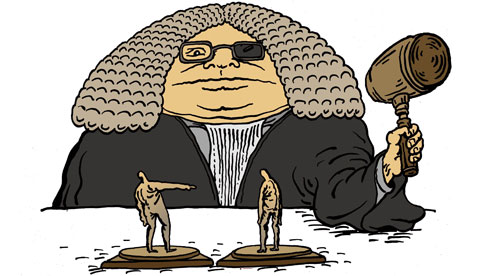 Romanian criminal cases ranging from robbery to rape may now be settled by a mediator rather than in court. A new law that went into effect on February 1 aims to reduce the backlog in the courts and to promote social peace. But there is a risk is that it will fail because it is too ambiguous and difficult to interpret.

As was to be expected, the law, proposed by Alina Gorghiu of the National Liberal Party, caused a wave of protest in civil society and in the media, which brands it "aberrant". Yet the issue is not that the new law allows one to "buy" one's innocence or that it puts a price on rape. Nor is it that it is considered unconstitutional.

The real problem is whether or not the new system is optional - on this point ambiguity remains. Alina Gorghiu says that "the victim is not obligated to attend an informational meeting or mediation," while the spokesperson for the National Mediation Council claims that the informational meeting is mandatory.

Assuming that one knows what is good for the victims better than the victims themselves opens the door to all sorts of abuse. On the other hand, mediation between victim and aggressor is what is known as "restorative justice" and is aimed at making citizens, rather than the state, responsible for keeping the wheels of justice turning properly. In face-to-face meetings between victims and aggressors, the guilty parties can admit guilt and the victims can ask for what they believe is adequate compensation for the injury inflicted. If in Romania victims can ask for an excuse or for money, in the United States they can ask for more, including that the aggressor move out of the area.

Some studies show that this type of justice facilitates victims' the return to normality because they feel they have been awarded a just reparation. Furthermore, it leads to a decline in the level of recidivism among the aggressors.

Rape, in and of itself, shows contempt for another person's will. One person forces another to submit without consent. Keeping this in mind, it is astonishing that we nonetheless choose to force rape victims, yet again, to submit to a slew of procedures. There is a risk that the imbalance in favour of the aggressor will be increased even more at a time when helping the weakest should be the focus. Anyone proposing mandatory mediation is forgetting that the state must protect its citizens and respect their freedom.

Furthermore, the Council of Europe's recommendation regarding the new law stipulates that victims must be provided the option of mediation but that in no instance should it be obligatory.

Talks regarding amending the mediation bill are symbolic of the level of public policy debates in Romania. Journalists are accustomed to politicians churning out aberrant laws, so they criticise. The worst part is that we now find ourselves with a law that cannot be interpreted. Good intentions that provide bad results tend to be rather harmful.

Is forgiveness a Romanian gene?

"We have to think about how Romanian society will cope with this law and whether it is adapted to the mind-set of the people," says lawyer Andrei Nistor in an article published by financial weekly Capital. Showing a pinch of scepticism, he says that "mediation, as it stands, needs strong support [from the public] in order for it to make a place for itself within a very rigid system."

According to Nistor, the law "should, nonetheless, provide some genuine progress in unclogging the judicial system." He adds that divorce cases and partition disputes [over goods or property], for example, should be resolved more quickly.