Ideas After the presidential election in Poland 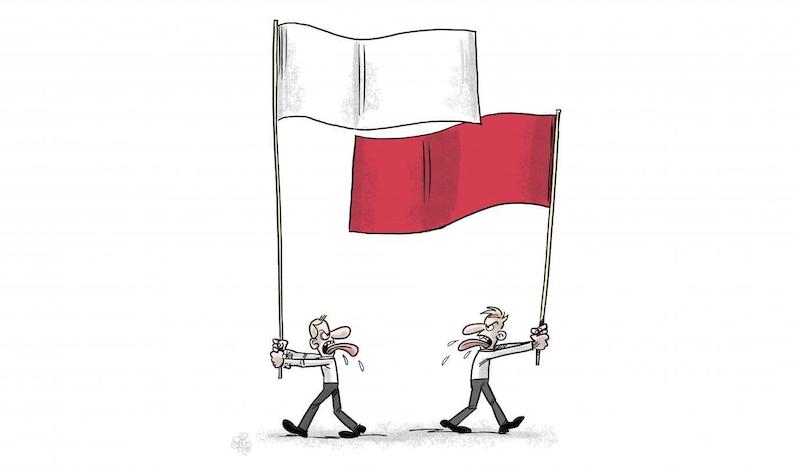 Ideas After the presidential election in Poland

Another turn to the right

The narrow victory of incumbent conservative Andrzej Duda in the recent presidential election dashed any hope that the country might derail the illiberal locomotive connecting Warsaw and Budapest. It’s now up to civil society to mend the deep fractures left by an utterly divisive campaign.

The victory of Andrzej Duda brings to an end a two-and-a-half-year electoral cycle in Poland. So far it seems a bittersweet victory for the PiS (Law and Justice) government, which has managed to maintain its hold on a critical element in the system of governance. The president, whose office is the only one elected by direct vote, holds the keys to the legislative process but also shapes foreign and defence policy. Without the president’s approval, the government is unable to enact any major legislative change, while the president’s opinion is far more than merely symbolic when it comes to foreign affairs.

The defensive strategy deployed by Jarosław Kaczyński’s camp was ultimately efficient but ugly, and it looks like it will be short lived. Since the parliamentary elections last year, Kaczyński’s coalition has been torn apart by internal conflicts stemming from junior yet indispensable coalition members: one more radical, and one more moderate, than Kaczyński himself. PiS has lost the senate by just two seats. This at least temporarily limits the potential for legislative blitzkriegs, as the party turns to political bribery or deals with legislative delays of at least 30 days while its most controversial proposals face public scrutiny.

Radicals still show revolutionary zeal, eager to press on with purging the judiciary, the media and NGOs. However, now that unifying factors like elections and EU budget negotiations have passed, their initiatives are once again in plain view. It should be noted that in his first term as president, Duda, for his own reasons, blocked or delayed government power grab initiatives – first on local government, then on judicial reform – in order to put his own imprimatur on the final overhaul. At a critical moment before his campaign, Duda tried to oust the head of Poland’s pro-government public television network. It is unclear what path he will take for the coming five-year term, but from the point of the government it looks set to be no less bumpy than the first.

From the European perspective, Poland has confirmed its rightward turn and dashed any hopes that the country might derail the illiberal train known as the Budapest-Warsaw express. On his way to winning a narrow margin of 440 thousand votes, Duda rehashed Viktor Orbán’s divisive discourse on gender and sexuality, nurtured homegrown bigotry against Germany, performed a political lap dance for Donald Trump, and pandered to the Kremlin-sponsored narrative of anti-vaccination movements. Despite taxpayer-funded propaganda disseminated across the whole array of public media, Duda still ran neck-and-neck against the mayor of Warsaw, who finished with 10 million votes. Duda’s campaign looked desperate, suggesting little hope for future gains in public opinion.

Duda will now face strained relations with most of the other European leaders. The Polish president has confirmed western liberals’ worst prejudices against Poland. Moreover, by comparing LGBT to communism he not only insulted Luxembourg’s prime minister Xavier Bettel – inciting gestures of solidarity from other EU leaders –  he has also antagonised one of Donald Trump’s main advisors. Richard Grenell, the former US Ambassador to Germany, is spearheading a global effort to decriminalise homosexuality – leading a  coalition against Iran – but also decides the future of American troops in Europe. As reported by Reuters, Fort Trump – a key element of Andrzej Duda’s presidency – has no chance of being revived. Immediately after it was reported, and just days ahead of the campaign, Andrzej Duda rushed to meet Donald Trump in Washington, where no concrete steps were confirmed. American presence in Poland remains part of NATO’s Eastern Flank strategy, with some promises of reinforcement from the White House, but permanent US bases will not be built – contrary to pledges made by the Polish president.

Moreover, in the event of a Democratic takeover in Washington this November, Duda will face an uphill diplomatic battle to save face with a key strategic ally. Joe Biden’s foreign policy team is likely to invest in repairing relations with key European leaders by mending any cracks in the EU exploited by Trump. This means that Duda’s key initiative – the Three Seas Initiative composed of several EU members on the eastern border – may lose its American political sponsor. While US investment in the region will continue – at the very least, to ward off the Chinese influence – it will have to show a different face to other EU partners. Only time will tell if Andrzej Duda can still be considered a suitable leader of the initiative.

While cooperation between presidents in the Visegrád group (V4) is not essential, it has proved helpful in building a like-minded club. Duda’s passion for skiing allowed him to bond with the former president of Slovakia. But with the recent win of charismatic liberal-minded Zuzanna Čaputová the presidential chemistry is gone, and Mr Duda is unlikely to seek the company of the Czech Republic’s pro-Russian president Zeman, or Hungarian János Áder, who lacks a popular mandate.

Lagging behind the other V4

The Visegrád countries now lack a common narrative for post-pandemic Europe, as anti-migrant sentiments take a sharp turn towards the economy and public services. Moreover, while the other V4 countries have shown good coordination on border reopenings among themselves and their respective neighbours, Poland has all too clearly lagged behind.

None of these pitfalls are necessarily a comfort to Polish liberals, who were forced to change their tactics and embrace some of the social policies implemented by PiS. Still, they urgently need to confront PiS in the cultural war while coming up with convincing economic solutions. It won’t be easy, but there is hope that the three years until the next elections will prove sufficient to build an opposition driven by a powerful and persuasive vision.

For lack of a better slogan, “it’s the economy, stupid” may articulate the new hope. The creative accountancy of Mateusz Morawiecki, minister of the economy before becoming prime minister, has led to generous social spending during times of prosperity. But public finance is a giant with feet of clay.

Contrary to the nationalist narrative, or rather under its disguise, Poland is planning to sell a portion of Lotos oil company. Recently the EU Commission approved a merger of this public company with Orlen, another company controlled by the state. However, the merger excludes nearly all of Lotos’s profit-making assets, which have to be sold. One explanation is a desperate effort to patch gaps in the central budget, but this can only ever be a temporary solution: the country already urgently needs to raise taxes and increase its debt.

While the culture war may seem a cover for more pressing problems, such political divisions often lead to harsh consequences for society at large. This war’s cannon fodder are NGOs, human rights activists and the media, which are tugged this way and that by both sides of the argument. Right now, Poland needs a strong civil society with enough stamina to remain politically influential but not partisan, as the government inevitably tries to discredit all dissent. The EU faces an arduous struggle in Poland, one at the very heart of the future of Europe.