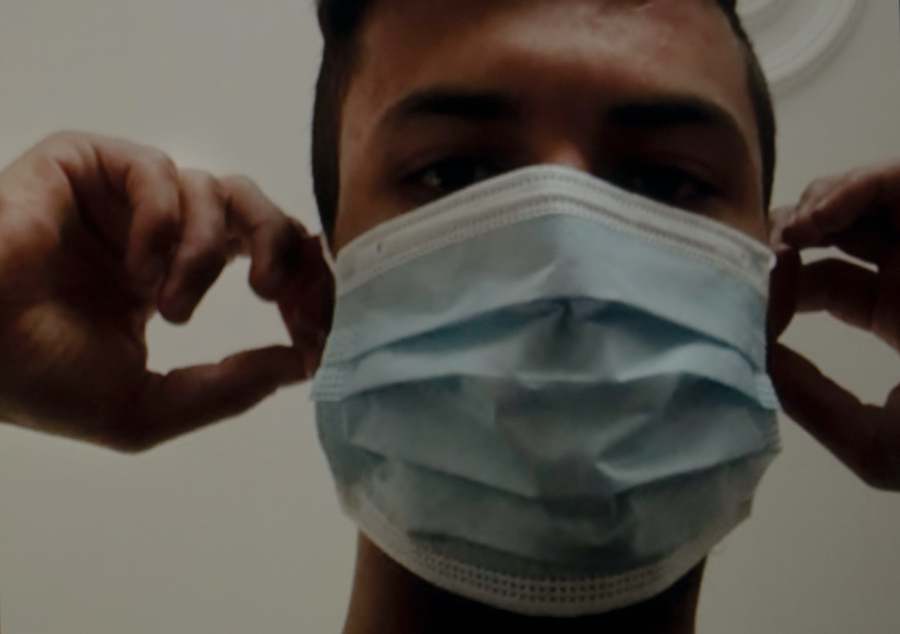 Born in Jordan from Palestinian parents, Rahman fled the war in Syria and sought for asylum in Sweden and then in Norway, before going back to square one. After unsuccessful attempts to reach the EU through Kosovo, he made it to Spain through Morocco, and is now waiting for his asylum application to be examined. This is the fourth portrait from a series on young undocumented refugees at times of Covid-19, in association with Lighthouse Reports and the Guardian.

Rahman* was out buying food when Spanish police handed him a 500 euro fine for breaking coronavirus restrictions. “I’ll pay this as soon as I get a residence permit,” he told them. He laughs and shakes his head as he tells the story on a video chat. “Look how thin I've become, I weigh only 57 kilos,” he says. The 21-year-old Palestinian lets the webcam display his skinny 1.70m frame.

We speak in Swedish, mixed with Norwegian expressions – his capacity in both languages is testament to the nearly five years he split between the countries as an adolescent. They were formative years where he learned that even apparently kind gestures like the offer of a place to stay could open the door to unfathomable cruelty.

It was a time where no matter what Rahman suffered, the legal right to remain in Europe always eluded him. His lack of status contributed to appalling crimes being committed against him, just as it left the criminals unpunished. He has been exploited and deported but his dream of Europe endures and he has found his way back to the continent but the future is uncertain.

In October 2013, 15-year-old Rahman arrived in Sweden alone. Like so many other young refugees, had heard many good things about Sweden: children are protected, they get to go to school and feel safe, their rights are respected and almost all get to stay.

He grew up in Jordan with Palestinian parents from Gaza. Jordan’s citizenship laws had no place for Rahman, leaving him stateless. When the war in Syria was in its third year his father wanted to send him across the border to fight with jihadists against the Syrian regime. His mother disagreed and the teenager fled to what she hoped would be a place of safety.

In Sweden, Rahman lived in a refugee shelter, started school and quickly learned the language. He played football in his spare time. But despite his young age and troubles in Jordan, the court of migration in Stockholm rejected his asylum application in the summer of 2014.

He didn’t know what to do, or where to go. The only thing he was certain about was that he couldn’t return to Jordan and his father. Rahman decided to stay in Sweden without a permit. He left the youth hostel in Stockholm to avoid being deported, and cut off contact with his guardian.

That’s when a friend introduced him to Martin: a large man in his thirties, with a shaved head and heavy gold chains around his neck. Once Martin understood Rahman’s situation, he invited him to a flat in central Stockholm.

When he got there Rahman was shocked. Some people sniffed glue; others did cocaine. He was given a drink – it was the first time he had tried alcohol. The night became a haze. Martin took him into a room. Rahman was struck to the ground and felt hands on his body.

The rapes and beatings continued for months. Martin threatened to kill him if he tried to run away. Rahman had seen guns and knives around the flat and didn’t dare argue or ask questions. “I had nowhere to go. No money. And there was no one to help me,” he says.

A lot of people came to the flat, and it was Rahman’s job to keep it clean. He was given fast food and drugs. Martin would call at any hour and send him off with a bag and address to deliver it to. He was sent on drug trips across Europe, for which he was given new clothes, a fake passport and a bag to carry. Rahman, usually on drugs, slept through the flights.

Rahman is among thousands of children who came to Sweden in recent years only to go missing when their European dreams were shattered. According to the Swedish Migration Agency, 2,014 unaccompanied minors are missing without trace since 2013 -- equivalent to almost 70 school classes. The threat of deportation is often mentioned as a reason for these disappearances, as is human trafficking.

But no one really knows, because no one is searching for them. The police keep records but often don’t actively search for the children. Municipalities say children no longer resident in their area are not their responsibility. The Swedish Migration Agency says they can’t examine the cases of missing children. In 2016, the UN Human Rights Committee criticised Sweden for failing to prevent these disappearances.

To understand where the system was failing, I researched every suspected case of human trafficking of minors in Sweden during a four-year period up to 2015. According to police reports and preliminary investigations, more than half of the trafficking cases involved sexual slavery, in which nearly half of the victims were boys. The police's failed response to trafficking was systemic.

Rahman was one of those cases. I tracked him down in Norway. After several months, he had managed to escape Martin. On reaching neighbouring Norway, he once again applied for asylum and reported his experience of trafficking to authorities. Rahman and his lawyer felt they didn’t take his case seriously. Because the trafficking took place in Sweden, Norwegian police passed the investigation to their Swedish colleagues. Rahman didn’t trust the investigators in either country. They didn’t seem to realise how dangerous it would be for him to single out Martin with no guarantee of protection.

Shortly after Rahman turned 18, we spent a few days at a seaside resort. Surrounded by glittering Norwegian fjords, he and his court-appointed guardian sat outside on a mild summer evening. He leaned against her with his big ragged hair, long eyelashes and gentle smile. “She's like a mother to me,” he said.

The Swedish trafficking investigation was eventually dropped. His asylum application in Norway was also rejected. Now he was no longer technically a child. In the summer of 2018, he was deported to Jordan.

After nearly five years in Europe, Rahman struggled to fall in line with the more socially controlled society in Jordan. He couldn’t return to his strictly religious family: he now smoked, drank alcohol and wore an earring. He was meant to try and find a job without a national ID, which also meant no access to doctors or hope of returning to education.

The police seemed to relish harassing him. They would ask: Why were you in Europe? Why have you come back? And he was mocked by friends and relatives: Where’s the money, the success, the expensive things? For a while he worked 12-hour days at a tourist bazaar for wages that did not even cover his rent. After a few weeks, unable to see any other way, he decided to leave again.

First he attempted to sail to Greece via Turkey but the yellow dinghy was stopped by Turkish coast guards. After a month and a half in a Turkish prison, he returned to Jordan. He still had a Norwegian girlfriend at the time. As a European she could just take a plane and come to visit for a few weeks. Rahman has none of these options.

His friends in Norway arranged for him to stay with people they knew in Kosovo and he planned to continue overland further into Europe. But he was arrested in Montenegro and sent back to Kosovo. He became severely ill and returned to Jordan. But in his head he was already making new plans to reach Europe.

This time he went to Morocco. Rahman knew this was his most dangerous journey so far. “But I am going to make it, I am sure of it!” he insisted. Later that summer, he reached the Moroccan border with the Spanish exclave, Melilla. This gateway to Europe is enclosed with high barbed wire fences and monitored by drones. Migrants and Moroccan boys his age were everywhere, hoping to get through the border at night. Some had been trying for months, even years. Rahman's plan was to swim around the sea fences, a treacherous feat where border guards sometimes fire plastic bullets at swimmers. His first four failed attempts and was hurt in a fall before he finally managed to swim into the port of Melilla.

Afraid of being forced back to Morocco by authorities in Melilla, he stowed away aboard a cargo ship to mainland Spain.  He was given a place in a refugee shelter and 50 euros a month to live on. But this assistance was cut after six months, just as the coronavirus pandemic hit Europe.

As we kept in touch over the years, I would always ask how he was and he always replied, “good,” no matter the circumstances. He has to stay positive, he says, to keep going towards what he longs for: an ordinary life, with a home, a girl and children. He would like to study languages and maybe work with tourists as he is so used to meeting new people.

But there is very little space to talk about the future right now. Rahman does not even know what tomorrow will bring, where he will sleep or how he will eat. He is considering two unwanted options: Start selling drugs again or commit a crime deliberately to get caught. “If I get arrested, I have somewhere to live until corona is over,” he said.

Rahman's European dream has brought him back. Despite the trials he has gone through, the stateless boy is now a young man but no closer to having papers. The asylum process in Spain is long, up to 18 months, and uncertain and that was before the pandemic. He thinks of Sweden or Norway but doubts his chances. From Scandinavia to Jordan he has never been granted the right to belong. “Why is that?” he asks. “Why can’t I be legal anywhere?”

*Name changed to protect his identity.

Check out this article at the Guardian.