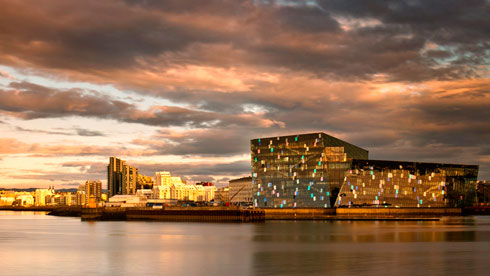 Completed just as the financial bubble burst, the Harpa concert hall symbolises the recovery of Iceland following years of gloom. Just one of the reasons why it was awarded the 2013 Mies van der Rohe European Architecture Prize.

The Harpa concert hall and conference centre in Reykjavík

Angular, translucent and with an open design. A theatre of lights and shadows dominated by the elements of air and water, in harmony with the soul and everyday traditions of Iceland: the Harpa Concert Hall and the Reykjavik Conference Centre was awarded on April 29 the European Union prize for contemporary architecture, presented by the Mies van der Rohe Foundation and the European Commission.

Its structure reflects not only the sea bordering the port of the Icelandic capital and the skies of the North Atlantic and the Arctic, but sends out a signal: the Harpa “has ceased being a symbol of the crisis and has become a symbol of the recovery from the crisis,” believes Portuguese architect Pedro Gadanho, member of the jury for the Mies van der Rohe prize, which also honours the firms of Henning Larsen Architects and Batteríið Architects, who worked with visual artist Olafur Eliasson’s studio.

The jury for this contemporary architecture prize was seeking projects that “symbolise the union of Europe” and sit “architecture down at the table as a player in the cultural projection” of the old continent, continues the Portuguese juror. The week before its decision, the jury travelled across Europe to view the five projects still in contention and choose the winner – before eventually settling on Iceland. The winning formula: the collaborative spirit, the public space, the dream, and notably, the economy.

Emerging from the ground in an area of the Icelandic capital attempting to reinvent itself, the Harpa was picked out for having “captured the myth of a nation – Iceland – that has consciously acted in favour of a hybrid-cultural building during the middle of the ongoing Great Recession,” wrote the Chair of the jury, Wiel Arets, in a statement.

Also coming with award money of €60,000, the project, according to Arets, “is an important message to the world and to the Icelandic people, fulfilling their long-expected dream.” Peer Teglgaard Jeppesen, a member of the Henning Larsen cabinet, sees in the Harpa “a symbol of the new dynamism of Iceland”.

Head of contemporary architecture in the Department of architecture and design at the Museum of Modern Art (MoMA) in New York, Pedro Gadanho stresses the Icelandic tradition that inspired the project less than the fact that “it is a building that went ahead with some difficulty and in a rather hostile environment” – the collapse of Lehman Brothers, the end of 2008, the start of the recession, and a “Iceland that was the first country to suffer the effects of the crisis”. This crisis “mowed down the project when it was in full swing and left it in convulsions,” he says.

But the Harpa, not content to be an economic symbol, is also vibrant testimony to “a new architecture, robust with new references, that responded to a strong desire of Icelanders to build a concert hall.” Pedro Gadanho emphasises the collaboration of architects and Olafur Eliasson in “the construction of the facade”, on the “very spacious concert halls”, and “the play of light, combined with its setting at the edge of the sea”, all integrated into a “growth of the city” strategy, which is reinventing itself in its port area.

The Mies van der Rohe Foundation and the European Commission (which stresses the contribution of architecture to Europe’s creative sector, with more than 500,000 jobs and 4.5 per cent of the GDP of the EU) have rewarded not only this cultural facility bringing new life to Iceland. The Emerging Architect Special Mention Award (along with €20,000) went to the Spanish duo of Maria Langarita and Víctor Navarro, who transformed a depot of a disused slaughterhouse in Madrid.

‘Architecture emerging from the crisis’

Welcoming the Red Bull Music Academy, an event sponsored by the drinks brand held in a different city every year to bring together well-established producers, musicians and rising stars, this Nave de Música Matadero was put together in just two months.

One can see in the Harpa “a work of the former iconographic regime […] a victory of the ‘transparent’ image and symbolic object,” muses architecture critic Jorge Figueira, while the Nave de Música, sited in the former slaughterhouse depot, can be seen as a “revelatory space, as architecture emerging from the crisis, of a poetry of pragmatism, which derives directly from the vocation of the space,” and even as a “victory of the non-image, and of irony.”