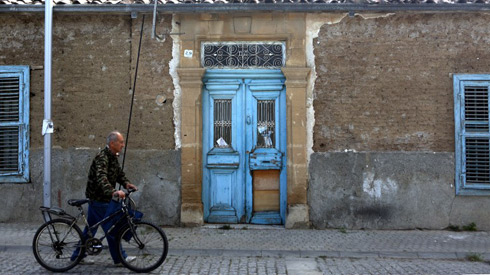 A delegation of the troika is in Cyprus until the end of July to check up on the implementation of the bailout finalised in the spring. For the Greek population of the island, the therapy to restore order to the finances of the country is already being felt.

A husband comes to open the door in boxer shorts and slippers. His wife is in the room, lying on an adjustable hospital bed. She is wearing makeup, a bit of gloss on the lips and some eyeshadow. Barbara Pitsillides, the nurse, gives her a better pillow. “Has the nausea passed?” she asks.

The wife doesn’t remember her morning sickness. Her memory is failing: the metastases have spread into her brain. “Our fight has gone on for 10 years, and we want that it to go on for another 10,” says her husband, watching quietly, trying to smile. The man spends every moment of his waking day taking care of his wife of 40 years. He is terrified at the idea of making the tiniest error.

Their membership in the association of cancer patients and their friends had given him some reassurance. At any time, if he had doubts, he could ring up the association’s team. It is this group that has provided them with the adjustable bed, the wheelchair, and the portable oxygen supply.

Barbara does not know how long the hospital will still be able to come to those who are trying to outsmart cancer. Donations have been drying up since March and since the negotiations got underway between the Cyprus government and the troika (the European Commission, the European Central Bank and the International Monetary Fund) over a €10bn loan that Cyprus received in exchange for shrinking the country’s banking sector. The holdings of Laiki, the second largest bank in the country, have been split into a "bad bank" and a "good bank": the first has been left to die, and the second has been absorbed by Bank of Cyprus, the biggest bank in Cyprus. Accounts holding more than €100,000 were heavily taxed, bringing big losses – “haircuts” – for shareholders and creditors.

Barbara gets back into her old company car, which she has parked outside the house of the couple. Only 20 minutes ago she was with Nicolas Philippou, Executive Director of the association, at their headquarters, a leased building in the suburbs of Nicosia. "[[The situation is very difficult. We’ve already cut our salaries by 20 per cent]] to avoid having to cut our services”, he said regretfully.

In addition to palliative home care, the association runs a day care and offers psychosocial support, health education, physiotherapy and transport to the Oncology Center. “Normally, we have enough in our bank account to cover two to three months of our budget. When the cuts came along, we had €170,000 with the Laiki bank. We got the news like this: ‘You no longer have any more than 100,000. The rest has been confiscated.’”

The authorities made no distinction between term deposits and current accounts. That translated into a drying up of liquidity throughout the country. Then, “they decided to make an exception for not-for-profit associations, and to confiscate only 30 per cent of amounts over €100,000, instead of 100 per cent. We were repaid in May, which let us pay the salaries.”

The two banks also held a large part of workers’ welfare funds. In Cyprus, where unemployment benefit is paid out for only six months, many employers encourage their staff to pay into this common fund. When the employee leaves the company, he receives what he paid in: it is a form of compensation. “We don’t yet know what will happen to this Fund,” says a worried Nicolas Philippou.

This drama affects many businesses, which is made clear on a visit to the Cyprus Union of Bank Employees (ETYK), in the new city of Nicosia. Constantinos Hadjimavros, who worked at the Laiki Bank for 13 years, had all his savings in the contingency fund. Today he is afraid. He had always planned his life around the idea that he had a job for life: he would leave the bank at the age of 60, as the rules of the institution lay down; he would collect the portion of the fund that was owing to him, which would let him settle his debts, while still keeping a small nest egg that would tide him over until he turned 65 and could get his pension. “That’s how the system worked,” he insists.

Times are changing in Cyprus. This becomes apparent when you go fo a walk in the capital, under a scorching sun. On Makarios Avenue, many of the shutters are drawn. The 2km strech of offices, clothes shops and large international brands that once showcased the ambitions of the country are standing idle these days. The shops are closing, surrendering the square in the old town to bars and cafés where Cypriots and foreigners sit down to an iced coffee or frozen yogurt.

‘The last summer of happiness’

Unexpectedly buried amid all this is poet Stavros Lambrakis's cafe, which draws in everyone — prostitutes, priests, the homeless, architects and artists. “We let ourselves be distracted by the conflict with the Turks [after the invasion of the north of the island in 1974],” says this young man whose scruffy dress sense illustrates his detachment. “It served as an alibi. Everyone did just what they wanted. Today, the people understand that their real enemies are the banks. This is the good side of this crisis: people finally get it. The bad news, of course, is that they are suffering.” The whole country is in the grip of fear: "[[No one knows what is going to happen, but the general feeling is that it’s getting worse]]. There’s no hope, and that’s sad.”

Among the tables of the café, a journalist who freelances for the Al-Jazeera network, the Politis newspaper, and for the cyprusnews.eu website is circulating. Times are not easy for journalists, despite the pressing need to keep the public informed. Ioannis Sotirioa can only confirm the decline in the number of articles he is asked to hand in, and the rate that he gets paid for each freelance piece as well. To get by, this young man, small, lean, with a shaven skull and thick-rimmed glasses, rises before dawn on Saturday to sell fruit and vegetables on the market.

Themis Themistoklis, a police officer, is furious with the government. Up for retirement in 2012, he was advised to wait until February 2013, when he would turn 56. Then, on December 28, 2012, a new Pensions Act was passed and came into force on January 1. “I was going to have a pension of €1,620 a month, and now I’m getting €1,469. That’s €151 less, 12 months of the a year. I took the state to court, and I asked the Supreme Court to explain to me why this piece of shit of a law had been approved three days before the new year!”

The country is crumbling. “Cypriots are living their last summer of happiness. The money from the tourists will last until September”, predicts Themis Themistoklis. “And then the Europeans will feel the fury of the Cypriots. Then, there will be different pictures on Euronews.”

View from the US

Smooth breakup of the Eurozone

"Has the breakup of the euro zone — something European leaders have been struggling to prevent for three years with frantic summit meetings in Brussels and a series of bailout packages worth hundreds of billions of euros — in fact already started?, asks the New York Times.

The US daily noted that since the introduction of capital controls in March, which stops any movement of money out of Cyprus, the Cypriot euro is different to those in the rest of euro area.

Implemented since the announcement of the Cyprus bailout in order to avoid capital flight, this restriction should have lasted only a week, writes the New York Times. However, it has already lasted four months and has been extended at least until the restructuring of Bank Of Cyprus is completed – currently scheduled for late September – and confidence in the country’s banking system returns.

While Cypriot President Nikos Anastasiadis is quoted by the newspaper as believing that his country is in fact "already out of the Eurozone", the economist and director of the Cyprus International Institute of Management, Theodore Panayotou, considers that detaching Cyprus from the rest of the Eurozone, is for European leaders a way to test a single common currency that no longer has anything in common.