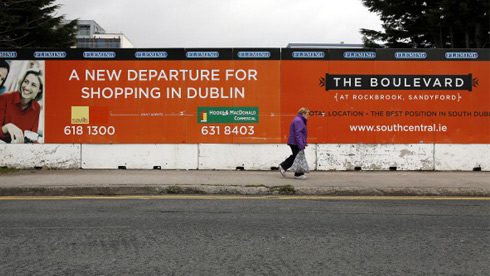 Rural Ireland feels the pinch as Dublin bounces back to life

As Ireland prepares to return to the markets at the end of the year, there are signs of fragile recovery. However, this is not evenly spread throughout the nation. As the country’s cities get back on their feet, rural districts sink further into recession, writes an FT journalist.

On a cold, drizzly evening Milford’s Gaelic football club meets for training. The team should be celebrating its success in a local cup competition but instead the mood is sombre as two star players are moving to Canada.

“The reason why I am emigrating is purely for work,” says Anthony McPaul, a 28-year-old construction worker. “I’ve tried to get a bit of work here but I could only get a day here or there.”

Mr McPaul is one of 41 club members, who will have left Milford since Ireland’s financial crisis struck in 2008. Many emigrated to Australia and Canada while others moved to Dublin, which is finally showing signs of economic recovery just as Ireland prepares to leave its international bailout in December.

New data show Ireland pulled out of recession in the second quarter, unemployment is falling and property prices are rising again after halving in value over five years. But the economy is fragile and there is evidence of a two-speed recovery with cities like Dublin, Cork and Galway growing while regional towns and rural areas stagnate.