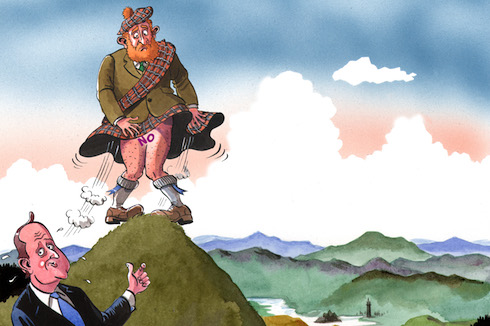 Scots say No to Independence

Scotland chose to remain part of the United Kingdom in a historic referendum on 18 September, with an estimated 55.3 per cent voting to stay in the Union, as opposed to 44.7 per cent for independence.

The Herald highlights a record-breaking voter turnout of 84.5 per cent, noting "the previous highest turnout in any UK election was 83.9 [per cent] in the 1950 general election." For columnist Andrew McKie, the participation rate itself is a victory for Scotland —

The result is decisive enough to preclude any return to the issue for a generation - with one proviso. There must be the delivery of further powers to Holyrood [the Scottish parliament]. [...] Scotland can be proud of having conducted a debate which has, for the most part, eschewed party politics, genuinely engaged in issues and mobilised people who have never taken part in political life before.

The Scotsman, which called to stay in the union, says the referundum proves that "in the right circumstances, politics can enthuse and energise". The daily says the biggest lesson in improving democratic engagement was including 16- and 17-year-olds in the vote —

What was clear [...] was the energy and enthusiasm with which this group grabbed the opportunity to be part of the national conversation, with schools reporting keen interest across all ability groups. And all, of course, watched by younger pupils in each school, hopefully inculcating in them an appetite for when they too could be trusted with such important matters of state. [...] It was always a mockery that people in this age group could work, pay taxes, marry, divorce and join the army, but could not participate in the country’s decision-making. It is time now for the same franchise to be extended to other elections too.

a barely disguised reference to the "neverendum" that the Unionists fear. After a closer result than most predicted two years ago, Salmond signalled that he believes there is potential for a second vote in the near future.

To the south, British prime minister David Cameron said the vote settled the debate "perhaps for a lifetime", notes The Times. For the daily, the next steps are "major constitutional changes" for the entire union —

The prime minister said he would ensure that a pledge to devolve tax, welfare and borrowing powers would be delivered in full, with proposals drawn up by November. [...] He also said however that the upheaval would have to include handing the English greater power over their laws too [...] at the same pace as devolution to Scotland.

For unionists in England, the victory of the No vote means acknowledging that such concessions must be made. "Thank God my country is still intact", writes author Daniel Hannan in conservative British paper The Daily Telegraph, adding greater powers for Scotland are inevitable —

It’s not just that all the main parties have promised it; it’s that there is no other way to unite the two sides. Home Rule for Scotland will then have implications for the other three parts of the country, forcing massive devolution all round.

The result also stirred reactions Catalonia, whose own aspirations to independence made for a closely followed referendum. For Enric Hernández, director of Barcelona daily El Periódico —

The nightmare of a domino effect in Catalonia, Flanders, Corsica and Padania makes for sleepless nights for a number of chancelleries. The Scottish mirror reflects Catalan independence, but also its opposite. The fears spread across Europe by this referendum reinforce nation states against other attempts at secession.