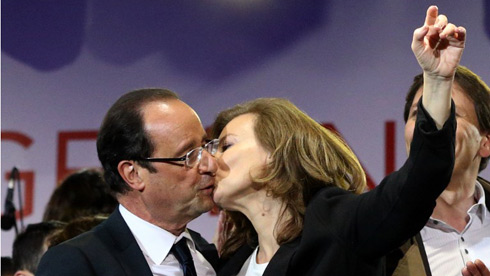 Still pandering to the power brokers

Collusion between the media and politicians seemed to be greater than ever under former French President Sarkozy. But, rather than ditch these olds habits, François Hollande, the low-profile new head of state, is quite happy to keep the media close.

The nation’s leading conservative newspaper ousted its top editor, apparently hoping to ingratiate itself with the new government. A cultural magazine brought in a new editor as well, opting for the partner of a newly minted government minister. The man she replaced took a job working for the new president.

The springtime election of François Hollande, the first French president from the left in 17 years, has brought about a shuffling of the news media ranks, along with a host of potential conflicts of interest.

Coverage has shifted too. Much of the news media, which largely lean left, used to revel in denouncing Mr. Hollande’s predecessor, Nicolas Sarkozy, but now many journalists are feeling bereft of material because of the new president’s less dramatic governing style. Mr. Hollande has proved confoundedly boring, they say, especially for news outlets that sometimes cover the government as if nothing else matters, relying on Paris politics to drive the news.

The line between politicians and the news media can be blurry in France, where the fates of some journalists have long been hitched to those in the government they pester or please. Mr. Sarkozy’s close ties to media executives were considered something of a scandal, and his presidency drew greater scrutiny to the incestuous relationships.

Mr. Hollande campaigned on a pledge to be “exemplary.” But in a country where much of the Paris elite share a common background, attended the same schools and go to the same parties, the traditional commingling of journalists and politicians has endured. Daniel Carton, a former reporter in France, blames the news media for not doing more to resist such close ties.

“They know exactly what they need to do to avoid things getting out of hand, but they won’t do it,” said Mr. Carton, an outspoken critic of conflicts of interest in French journalism.

For decades, newspapers have relied heavily on state subsidies. The public media, which account for perhaps half of mainstream television and radio news, are still run by political appointees. Private media outlets belong to companies or investors with demonstrated political leanings or business connections to the state, undermining journalistic impartiality.

Perhaps most striking this election cycle, was the situation of Etienne Mougeotte, whose run as top editor at the rightist daily Le Figaro began and ended with the presidency of Mr. Sarkozy, the politician he championed and whom he was said to advise.

“We’re a newspaper of the centre and the right, and we support Nicolas Sarkozy,” Mr. Mougeotte told the centre-left Le Monde last year. Under Mr. Mougeotte, Le Figaro was routinely criticised, sometimes by its own reporters, as being a mouthpiece for the government.

Mr. Hollande was said to have requested Mr. Mougeotte’s dismissal, according to French media reports, and it came in July.

The publisher, Serge Dassault, is a senator from Mr. Sarkozy’s political party. But Mr. Dassault also heads a major military contractor, and there was widespread speculation that Mr. Mougeotte’s ouster was meant to put the Dassault group in good stead with the new president.

Jobs for the WAGs

The news and culture magazine Les inRockuptibles hired as its new top editor Audrey Pulvar, a radio and television personality who was also the partner of Arnaud Montebourg, a government minister and a prominent member of the Socialist Party — she eventually resigned on December 21.

Ms. Pulvar recently announced the end of her relationship with Mr. Montebourg, but other such relationships have continued. Valérie Trierweiler, Mr. Hollande’s current partner, began an affair with him while reporting on him in the early 2000s, when he was a member of the National Assembly. She grudgingly passed on a television news job this autumn and stayed at the magazine Paris Match as a critic.

The public media have gone through post-election changes too. In October, Mr. Hollande named a new director for the country’s international radio and television news networks, RFI and France 24. He has pledged to reform the law that allowed him to make that appointment, but not until next year.

The directors of Radio France and France Télévisions, both appointed by Mr. Sarkozy, are expected to be replaced. The current law, which makes the naming of public media chiefs a presidential prerogative, was introduced by Mr. Sarkozy in 2009. At the time, commentators called the measure a power grab. Mr. Sarkozy said it was meant to remove a layer of “hypocrisy” from the appointment process, which was controlled by a handpicked government council.

The public media no longer serve as state propagandists, as they effectively were until at least the late 1960s, but remain under government “oversight,” said Jean-Marie Charon, a sociologist who studies the news media.

Private publications are also beholden to the state, at least financially. The government provided $1.5bn (€1.1bn) in subsidies to them last year.

Publications on the left are struggling to “find the right distance” from the government, Mr. Charon said. The jubilation that dominated political coverage last summer in Libération, Le Nouvel Observateur and Le Monde has since given way to acrimony. Whichever way the French news media lean, the departure of Mr. Sarkozy has left many outlets yearning for more excitement.

“We had five years that were pretty exceptional; we had a man who was the centre of everything,” said Pierre Haski, co-founder and editor of Rue89, a news Website. “All of a sudden, we’ve gone from an overload to an underload.”

Other parts of the series:

El País: delusions of grandeur
Newspapers will not die in Silicon Valley
Culture is becoming a luxury
Embedded in the Brussels bubble

Newspapers as a political springboard

Bernard Tapie has been allowed “to help himself to the press” worries Libération. On 19 December, the businessman acquired Hersant Media Group, which publishes several regional newspapers in the south of France, particularly in Nice and Marseille, France's second city, and in the former French overseas territories.
A controversial figure, Tapie, who was a government minister under François Mitterrand, was subsequently convicted of match rigging in his capacity as chairman of the Olympique de Marseille football club. He was also at one point the owner of Adidas, whose resale in the early 1990s brought him into conflict with Crédit Lyonnais, which later moved to bankrupt his business group. His fortunes were finally restored when the bank was ordered to pay him 390 million euros under Nicolas Sarkozy's government.   Liberation, which “recalls that he [Tapie] punched and kicked a journalist guilty of writing an article he didn’t like,” remarks—

Obviously, Bernard Tapie should not have been believed when he swore he would never return to politics. He has been dreaming of revenge for nearly fifteen years. Today part of the mask is falling away, revealing a two-stage strategy: buy a newspaper, conquer the promised city ... [...] In those fifteen years, though, the political and media world has gone through a lot of shocks, and he hasn’t grasped this yet.