While Britain’s left leaning press is howling at the sheer scale of Chancellor George Osborne’s €91.5 billion cuts, conservatives are praying that this scaling back of the state will quickly lead to growth.

I'se back. Margaret Thatcher with David Cameron inside 10 Downing Street in London June 8, 2010 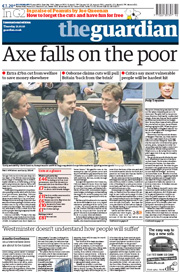 In The Guardian Seumas Milne rails against the savagery of the Lib-Con government’s “battery of cuts for which they have no mandate. It is a kind of political coup.” The deepest programme of public spending cuts since the 1920s reveals that "the Tory-led coalition is using the economic crisis not only to rein in the state, but to reorder society". "This is to be Britain's shock therapy", he adds. "It is the culmination of the Conservative project to dismantle the heart of the welfare state – or, as Osborne put it, to ’reshape’ public services – that began more than 30 years ago".

The spirit of the Iron Lady is also summoned by Johann Hari in The Independent - "Margaret Thatcher is lying sick in a private hospital bed in Belgravia but her political children have just pushed her agenda further and harder and deeper than she ever dreamed of", he writes. "George Osborne [UK Chancellor of the Exchequer] has just gambled your future on an extreme economic theory that has failed whenever and wherever it has been tried".

Without job creation we are stuck

Accusing Cameron and Osborne of ignoring the cumulative wisdom of such luminaries as Nobel laureates Paul Krugman and Nobel Joseph Stiglitz, both critical of their strategy, they have also “refused to learn from the fact that the country they held up as a model for how to deal with a recession – "Look and learn from across the Irish Sea," Osborne said – has suffered the worst collapse in the developed world. They have instead blindly obeyed the ideological precepts they learned as baby Thatcherites: slash the state, and make the poor pay most". 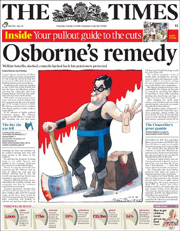 Timescolumnist Camilla Cavendish, on the other hand, celebrates the fact that "the party’s over. And what a party it has been. Drunk on largesse, the chattering classes were oblivious to the growing resentment of taxpayers who saw their council tax, national insurance and TV licences inflate in line with incompetence. Politicians were judged on how much they spent, or how many new laws they created, no matter how unaffordable or counterproductive. How should we judge a government that aims to spend less? Mr Osborne’s biggest challenge is to put Britain back on a path to growth. Without growth, deeper cuts or higher taxes become inevitable".

But, "without job creation", writes Cavendish, "we are stuck". Faced with the Chancellor’s forecasts that some 490,000 jobs will be lost. The private sector will "need to leap like a lion”, she writes. “We will need more than green energy, which has limited job potential — we will need the sector where we are strongest: financial services".