Report Cyprus
Effigies of Angela Merkel and Nikos Anastasiadis on display at a carnival in Limassol, Cyprus 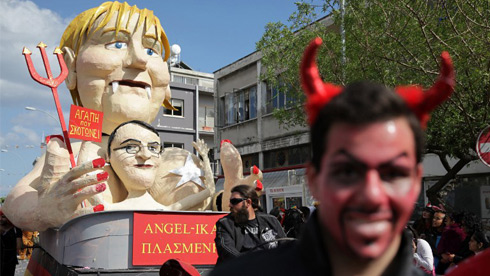 The crisis? Merkel’s fault, of course!

The aid plan launched by the Eurogroup in return for a tax levied on Cyprian bank deposits has provoked violent reactions. Germany is often accused of wanting to punish a struggling country. However, it’s not the Chancellor who is to blame for the mistakes of the island, writes an economist.

Effigies of Angela Merkel and Nikos Anastasiadis on display at a carnival in Limassol, Cyprus

In this latest crisis hitting the euro, it’s not the Cypriots who are at fault; it’s Angela Merkel and her government – don’t waste time looking for other explanations. It’s not the fault of a bloated banking sector that holds €128bn in assets in a country with a GDP of €17bn – it’s Merkel who did it.

Don’t blame those banks that, as the German secret service warned in November, opened their vaults to €21bn from Russian oligarchs without looking too closely and accepted – no questions asked – a few other thick wads from Arab millionaires (from fortunes that are hard to justify). The banks practice International Personal Banking and "tax optimisation"; Merkel, in contrast, labours under a Protestant sense of morality.

It’s not even the fault of the money managers who put 50 per cent of their money – that’s right, 50 per cent – into Greek bonds, purely out of patriotism (Cyprus is half Greek), even though they knew that they risked losing it all. No, that’s Merkel’s fault.

It’s certainly not the fault of Sigmar Gabriel, the agreeable German Social Democrat leader, who cut off all lines of retreat for the Chancellor: "I cannot imagine the German taxpayer bailing out Cypriot banks whose business model is based on allowing tax evasion." The entire blame, of course, falls on Merkel.

Nor is it the fault of the pathetic ex-President of Cyprus, the communist Dimitris Christofias, an autocrat formed in the Soviet Komsomol (perhaps the reason why there are so many Russian bank accounts in Cyprus), who was not in the habit of consulting his ministers, the parliament or the central bank.

The Guardian, a newspaper that cannot be suspected of ill will, accused him in December of leading the country into "a sorry state." Christofias was the one who decided in 2011 to keep in Limassol harbour the ship carrying explosives to Hezbollah, which then blew up and took out the only power plant in the country. He also supported the president of one of the two big banks, the Marfin Laiki, when it decided to shift its headquarters to Greece despite opposition from the central bank of Cyprus. His last act of foolishness was refusing to allow negotiations on the merger of the Marfin Egnatia Bank of Greece with the Laiki Bank of Cyprus when the famous offshoring to Greece was decided on, a move that cost Cyprus €4bn in assumed liabilities. With that, this economic genius sank his country. But no – it’s all Merkel’s fault.

Nor does it appear that his brand-new successor, Nicos Anastasiadis, a weak leader playing the game of ‘blame Europe for what I have to do,’ should shoulder any responsibility at all. Anastasiadis props himself up on half-truths to plunder the deposits of the Cypriots instead of starting with sending a bill to the shareholders and creditors of the banks. But of course, that would end the cushy financial system that they have built up and that they expect to continue to live off. Schäuble reminded him yesterday that the idea of robbing depositors didn’t come from Germany. But no. It’s all Merkel’s fault.

And it’s Merkel fault, too, for allowing Anastadiadis to toy with the prestige of the Eurozone, as Papandreou did before him. And because four years ago she didn’t stand firm and veto Cyprus’s entry into the eurozone. Because she let herself be fooled by the certification of the OECD that Cyprus had met 40 EU directives against money-laundering. And, in passing, it’s also the fault of Christine Lagarde, of the IMF, which supported it. Do you recall who it was who handed the Greek minister the list of tax evaders, the one that got lost? As if Lagarde knew nothing about the state of the Cypriot banking sector! But no. It’s all Merkel’s fault. And it had better be her fault, because any other theory will leave us standing naked before our own cluelessness.

Expropriation is only justice

In Tuesday's German press, the Süddeutsche Zeitung stood out from the crowd with a piece backing the expropriation: "He who benefits must pay", headlines the centre-left daily.

Yes, a government has the right [to expropriate from its citizens] – and in the case of Cyprus, it’s even the fair thing to do, at least in principle. [...] The economic model that combines tax-dumping with lax financial oversight while wooing foreign millionaires was not thought up in Berlin or Paris but in Nicosia.[...] This is why savings are in danger there, and not here.

The Munich daily, however, believes that it is crucial to protect "innocent small investors." It accuses the president, Anastasiades, of having inflamed public opinion against Cyprus’s European partners by claiming that involving small savers was inevitable. His goal, according to the SZ: to hide the fact that he wants to hold onto the island’s business model.