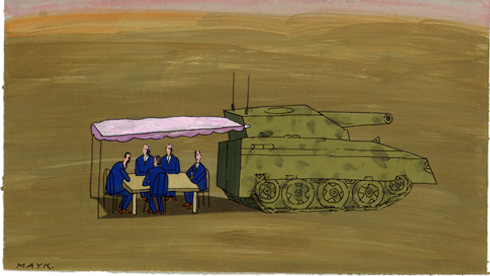 In both militarily intervention and investment in the defense industry, Europeans lack coordination and have lost credibility. Yet, after the French intervention in the Central African Republic, the issue has returned to the spotlight and will be discussed at the summit on December 19 and 20.

In 1991, the Belgian foreign minister of the time, Mark Eyskens, remarked on the EU’s incapacity to develop a common defence policy when he described Europe as “an economic giant, a political dwarf and a military worm.” In recent years, there is no denying that the EU has become more active in this field. But the grand and often expressed ambition for real investment in a common security and defence policy, which includes an independent military capacity, has yet to realised. And this continues to be the case at a time when global change is obliging Europeans to engage in a more serious consideration of security as an issue in common.

In an increasingly multi-polar world, the United States is no longer ready to militarily intervene, as a last resort, if European security is threatened. At the same time, we are also witnessing growing instability on the EU’s doorstep: in North Africa, the Middle East, and the Caucasus. Worse still, threats to our security are growing more and more diverse, and more intertwined in terms of internal and external security.

The logical response to this situation appears to be greater cooperation and more European responsibility, and the European Council has set itself this goal. Europe must be more effective and more visible in the field of security, there must be more investment in military capacity, and the European defence industry must be reinforced. These are the priorities underlined by the documents published by the European Commission and by [the EU’s High Representative for Foreign Affairs] Catherine Ashton ahead of the Council meeting.

In recent years, we have also witnessed a reduction in the number and the scale of European military operations outside the Continent. Europe’s contribution to global security and stability is mainly composed of training and support, and does not involve the proper deployment of military resources. [[The lack of unity and resources in the EU was highlighted by the intervention in Libya where Europe was obliged to let the United States and NATO take the initiative]].

In the cases of Mali and the Central African Republic, France did not wait for the EU to express an opinion, because as a French diplomat, who was quoted by Le Figaro explained: “Waiting for Europe is like waiting for Godot.” The decision to intervene was entirely unilateral. And although those who have the capacity and the will can contribute, these operations will remain basically French.

The situation with regard to Europe’s military capability is even more serious. Pressure from the financial and economic crisis has led all the EU’s member states to cut their defence budgets. And there has been virtually no coordination of this on the European level. Given the pre-existing lack of crucial resources, the investment needed to maintain a credible defence force in Europe is more urgent than ever.

With regard to the purchase and deployment of equipment, cooperation between member states is essential, and this also applies to Europe’s largely fragmented defence industry. Compared to other countries, EU states invest very little in military research and development. And what little investment there is has hardly any impact, because member states — and in particular large member states – protect their own industry. As a result: Europe has to contend with the redundant and overpriced production of very expensive equipment, and a loss of competitiveness on international markets.

But if this situation persists, the greatest loss of all will be that Europe will no longer have sufficient industrial capacity to guarantee its own security.

In short, there has been no response, apart from stringent budget cuts, to a confusion of policy objectives in the field of defence. The question now is, when they meet on December 19 and 20, will EU member states be willing and capable to set aside their own priorities for the general interest. If not, this will be yet another wasted summit, and the pertinence the remark made by Mark Eyskens so many years ago will continue undiminished.