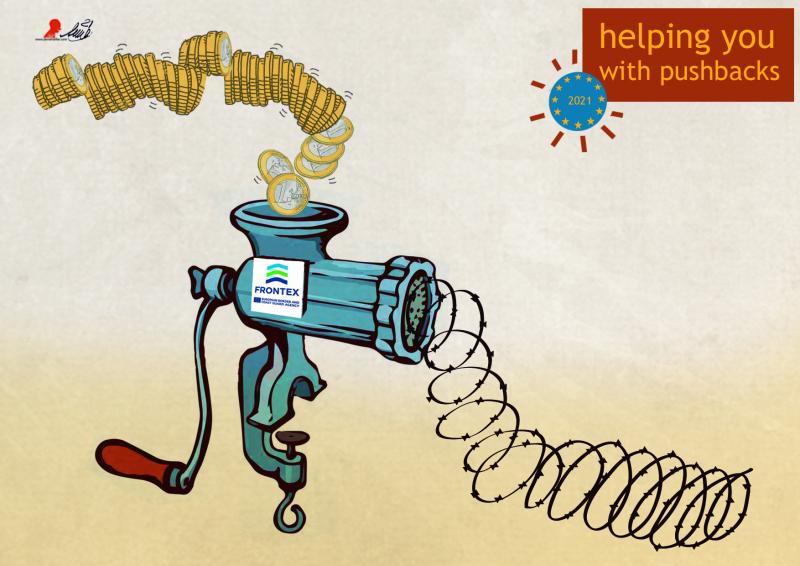 The lobbyists behind Europe’s response to migration

A “fortress Europe” is being built thanks to a massive deployment of resources. The result is that the border agency Frontex embraced corporate interests rather than human rights, a new report from Corporate Europe Observatory (CEO) shows.

Last year wasn’t a happy one for Frontex, in the news for illegal pushbacks and abuses against migrants and refugees (see below). Now it is under investigation by the EU anti-fraud watchdog OLAF.

“But the scandal of Frontex’s cozy relationship with the weapons and surveillance industry, brewing behind closed doors over the past few years, has received less attention,” Myriam Douo, Luisa Izuzquiza and Margarida Silva wrote in a recent Corporate Europe Observatory (CEO) report.

They obtained over 130 documents through freedom of information requests and the review opened “a window onto at least 17 industry meetings convened by Frontex from 2017 to 2019”. It all started with a lot of money.

In fact, in 2020 Frontex was granted a €5.6 billion budget – the largest among all EU agencies – for the 2021-2027 timeframe. Then 10,000 border guards came along, together with an extension of its mandate and the ability to acquire and lease its own equipment like vessels, drones and radars.

“This is a dream come true not just for Frontex, but for the security industry. Spying the opportunity for a new and major customer, it has been advocating since 2010 for an EU-level border force with precisely those capabilities.”

Even the consultative forum on human rights, established by Frontex itself, has never been heard. It was the security industry lobbyists who eventually shaped the agency’s approach.

They mostly discussed weapons, biometrics, maritime and aerial surveillance, heartbeat detectors and document inspection systems. Besides, migration was “portrayed as a threat, often linked to terrorism and crime”.

Yet, transparency remains very little. When CEO asked Frontex to explain how it was handling lobbying, a press office told them that "Frontex does not meet with lobbyists” and that it “does not attract the interest of lobbyists." When they asked again, Frontex denied meeting with lobbyists except on “Industry Days”.

Migrants are the real elephant in the room. “A noticeable omission from almost every one of these discussions is the potential impact on human rights of these technologies and products, including undermining people’s fundamental right to privacy, presumption of innocence and liberty.”

Human rights organisations had almost no access to the agency, which is particularly worrying in the context of the future EU border and migration policy. “Considering the growing power and budget”, CEO predicts that Frontex’ relationship with industry will intensify.  “Scrutiny over it should, too,” they add.

The European Parliament has set up a probe over harassment, misconduct and unlawful operations run by Frontex and aimed at stopping migrants from reaching EU shores via Greek waters.

On 24 February, MEPs have formed a new working group, chaided by Roberta Metsola (EPP, Malta) officially called Frontex Scrutiny Working Group (FSWG), to “monitor all aspects of the functioning of the border agency, including its compliance with fundamental rights.” The legislators will personally conduct a fact-finding investigation over the next four months in order to collect evidence to determine if the violations took place and if the agency was involved in them.