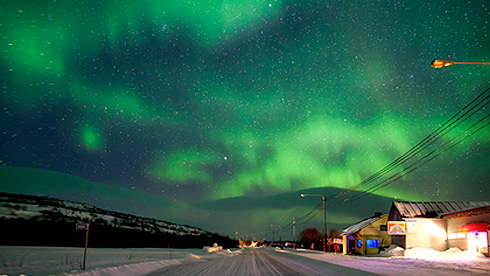 The road to the extreme north

The northernmost border post in the EU, the village of Nuorgam is the crossing point for workers that commute between Finland and Norway. However, the region, which is in the heart of Lapland, has to some extent been forgotten by the rest of Finland.

Every day, Jocke Pikkarainen leaves his home in Nuorgam [Finland] to travel 25 kilometres north to his job in Tana Bru [in Norway], where he dons a red uniform and spends his days dealing with outpatients. Jocke Pikkarainen is from Kimito [southern Finland] and a former student in Turku. Having worked as an ambulance driver, last August he and his girlfriend decided to move as far away as he could without emigrating, to work on the northern bank of the river Tana, which marks the border between Finland and Norway. Both he and his girlfriend, who is currently on maternity leave, found work in the medical centre in Tana Bru.

"In coming here, we were motivated by a sense of adventure and by the huge wages, which are double what we would earn if we did the same jobs in Finland," he says. Jocke Pikkarainen speaks to his patients and some of his colleagues in rudimentary Norwegian, but in Finnish to his departmental boss, Anu Saari. The department employs no less than five Finns, which is not unusual in the highly cosmopolitan Tana Bru medical centre, where only half of the staff are from Norway. "We have employees from the Philippines, Russia, Thailand, Canada and Estonia," explains Anu Saari.

The wages in the Norwegian health care sector have long been a lure for Finnish graduates, and not a week goes by without the arrival of a number of Finnish applications on Anu Saari’s desk. "In Norway, young people no longer want to do medicine. They are put off by the prospect of shift work, and the fact that other sectors offer better paid jobs," she explains. The demand from foreign workers is such that Norwegian medical facilities are spoiled for choice. "Mastery of the language is a key criteria. You have to speak Norwegian or have strong Swedish," continues Anu Saari.

Jocke Pikkarainen did not take long to get used to the language. Nor did he have any trouble abandoning his life as a student in Turku to become a family man living in the tranquil atmosphere of Nuorgam — a village like Tana Bru, where there is not much to do at night. More often than not the only tavern in the village is closed. And the six months of winter darkness is not for the faint-hearted. But none of this seems to bother Jocke Pikkarainen. "In fact, the atmosphère is quite pleasant. And the countryside here is incredible," he enthuses.

The border crossing from Nuorgam [in Finland] to the neighbouring [Norwegian] village of Polmak, is quite cozy. For an outpost situated at the most norhtern point of the EU, which also marks Finland’s border with NATO [of which Norway is a member], it is remarkably attractive.

At the border, a sign explains that the customs post is open during office hours and that a special permit is required to transport goods via the crossing at other times.

The official responsible for economic development in the municipality of Utsjoki-kyrkby [in Finland], Anne Länsman explains that the strength of the Norwegian krone and the difference in the cost of living, which is significantly lower in Finland, have made Nuorgam a very attractive destination for Norwegians.

"For the same cost, they can buy a lot more when they come here to shop. Norwegian purchasing power has boosted our business."

At the same time, she wonders if companies in southern Finland have fully understood the advantages of Utsjoki, which is only 200 kilometres from the Arctic, at a time when Norway has already invested billions in projects to develop the region. "When things start to move in the Arctic, Utsjoki will be very well-placed, not far away, but on the Finnish side of the border. I want to encourage companies to invest here so that Finland can take advantage of its proximity to the Arctic," she explains.

The region can not expect to depend on Norwegian purchasing power forever. Northern Lapland should also be looking to attract Finnish tourists, points out Aslat-Jon Länsman. Despite being only 26, Länsman wears many different hats. He is a reindeer herder, the managing director of his family’s business, which produces local delicacies like dried reindeer heart. He also runs a café that is open during the summer months and organises adventure holidays, which offer tourists an introduction to Sami culture, as well as salmon fishing, snowkiting and skiing.

"It is a challenge to get people to come here in winter," he admits. Aslat-Jon Länsman worries about the fact that most of the local young people leave to study and work in the south, and the impact on Sami culture, which is increasingly non-nomadic. "It is true that we have a fight on our hands, but there are plenty of opportunities for those who want to go into business," he remarks with entrepreneurial aplomb.

But are the locals really intent on trying their luck? "I don’t know any other young entrepreneurs in the sector here, even though three of the reindeer herders including myself are under 30 years old." For Aslat-Jon Länsman, young Samis should raise reindeer to ensure the survival of their culture. "Sami culture is all about raising reindeer. Whereas Finnish only has one or two words for reindeer, Sami languages have 150 that describe all of the different aspects of the animal.”