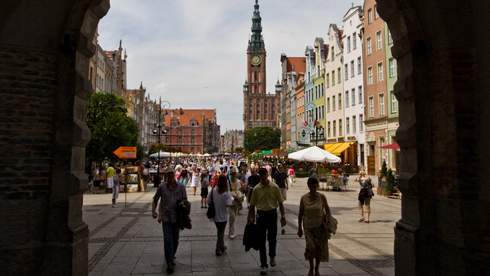 The Russians who shop gaily in Gdańsk

There have probably not been so many Russians in Gdańsk since the spring of 1945. Most are Kaliningrad residents, crossing the border to shop. It’s largely a one-way trade that sees about €20m a month flow out of the Russian exclave into Poland.

This time it is not tanks that bring them to Gdańsk, but coaches and cars with the white “39” registration sticker, distinctive of the Kaliningrad region. Heading home to Russia, they leave loaded down not with war loot but with stuffed shopping bags, to the great delight of the Polish shopkeepers.

“Very good shopping” says Tatiana Babak, who has just emerged from the Ikea store and is loading her car with plump carrier bags. She came to Gdańsk with Władimir Poliakov, her taxi driver friend, on the 130km each-way trip. Russian fuel is cheap: at 3 zł [€0.72] per litre, the trip does not cost a lot. Tatiana hits the “Tri-City” (the port agglomeration made up of Gdańsk, Sopot and Gdynia) at least once a month, and Władimir more often still.

“Everything is cheaper here,” she says, “except fuel. Around 2 to 2.5 times cheaper: milk, vegetables, cleaning products, nappies. Even alcohol is worth stocking up on – the price is right, the choice is greater and we can at least be sure that it’s not watered-down. It's pleasant here too, and people in general are open and friendly. It feels good.”

The mass influx of Kaliningrad residents into Gdańsk became possible thanks to the specific “local border traffic” regime introduced last summer, after an agreement was signed by the two governments in December 2011 and ratified six months later.

Russians can now apply at the Polish consulate in Kaliningrad to get on the list of vehicles approved to cross the border, and after two months they receive a pass that will be valid for two years.

“Our cooperation is working well and we want this success to become an argument in our talks with Brussels in favour of abolishing visas to the EU for all Russian citizens,” explains Russian Consul-General Sergei Puchkov. “We have plenty of cooperation projects going on – in the economy, in culture, in academia, and in sports. The Poles are helping us to prepare to host the 2018 Football World Cup,” the Consul-General adds.

And so, for more than six months now, about 30 buses and many hundreds of cars have been pulling up every weekend at the shopping centres of Gdańsk. Everyone is coming: small shopkeepers, workers, students, teachers and officials. For them, the trip across is more than a luxurious distraction; it’s a necessity of the highest order.

Poland has no other border with Russia except these 210km of land borders and 22km along the Baltic Sea in the country’s north-east. With an area of 13,000 square km and a population of 950,000, Kaliningrad borders Lithuania to the north and east, and is flanked by the Baltic Sea to the west and Poland to the south.

About two-thirds of the exclave’s population live in the capital Kaliningrad, which was known as Königsberg, or Królewiec to the Poles, until the end of the Second World War. Almost completely destroyed during the war, the former German city was later rebuilt in the Soviet style. The street plan changed entirely, making it impossible to retrace, even approximately, the daily walk of the most famous inhabitant of Königsberg, Emmanuel Kant. Fortunately, the ruins of the old cathedral with the tomb of the philosopher have been preserved and are now one of the few tourist attractions left in post-Soviet Kaliningrad.

The average length of stay of Polish visitors who cross the border is two hours, spent primarily buying up fuel.

According to Puchkov, the border trade in fuel is highly organised: “Of one hundred vehicles waiting in a queue at the border, about 90 belong to Poles from the border region. It’s a very specific type of car they drive – the Audi 100.” Why? “It has a huge petrol tank that can take a hundred litres,” Puchkov explains.

The Russian embassy in Warsaw has suggested to the Polish authorities that they develop a special lane for these gas tank-tourists, and so spare all the other visitors the endless queues. “We were told that it would go against the rules,” Puchkov says. “That everyone must have the same rights.”

How is it that a run-of-the-mill yogurt bought on one side of the border doubles in price once across it?

Adam Hlebowicz, author of a recently published tourist guide on Kaliningrad, gets to the root of the problem. “Where do these prices come from? It was a real mystery to me, until Kaliningrad traders eventually explained to me that the prices reflect the cost of extortion by local officials.”

Things have got to the point, as reported by the information portal Kaliningrad.ru, that Governor Nikolay Tsukanov recently asked his ministers whether the difference in the price of the same sausage on the two sides of the border is justified. The response was rather feeble and blamed the excessive profits of large retailers.

Corruption is a systemic problem in Russia. It’s not organised crime in the western sense of the term. Even in Russia under the Tsars, the “on-the-take” system was universally accepted. The state official was paid only a modest salary, since under an unwritten rule he would make up for it “under the table”.

With the Swedes, intractable when it comes to corruption, it took Ikea several years to finalise a contract to build a store in Moscow, because they refused demands for large sums of cash to be slipped “under the table”.

All Russia suffers from this organised extortion. In Kaliningrad, the residents of the city have found themselves in a very special situation: they can shop more cheaply on the Polish side of the border. Since that border opened, sales in stores on the Russian side have begun to suffer, as their former profits flow out to Polish companies. While precise data is missing, estimates are that the Russian exclave loses up to €20m every month to Poland.