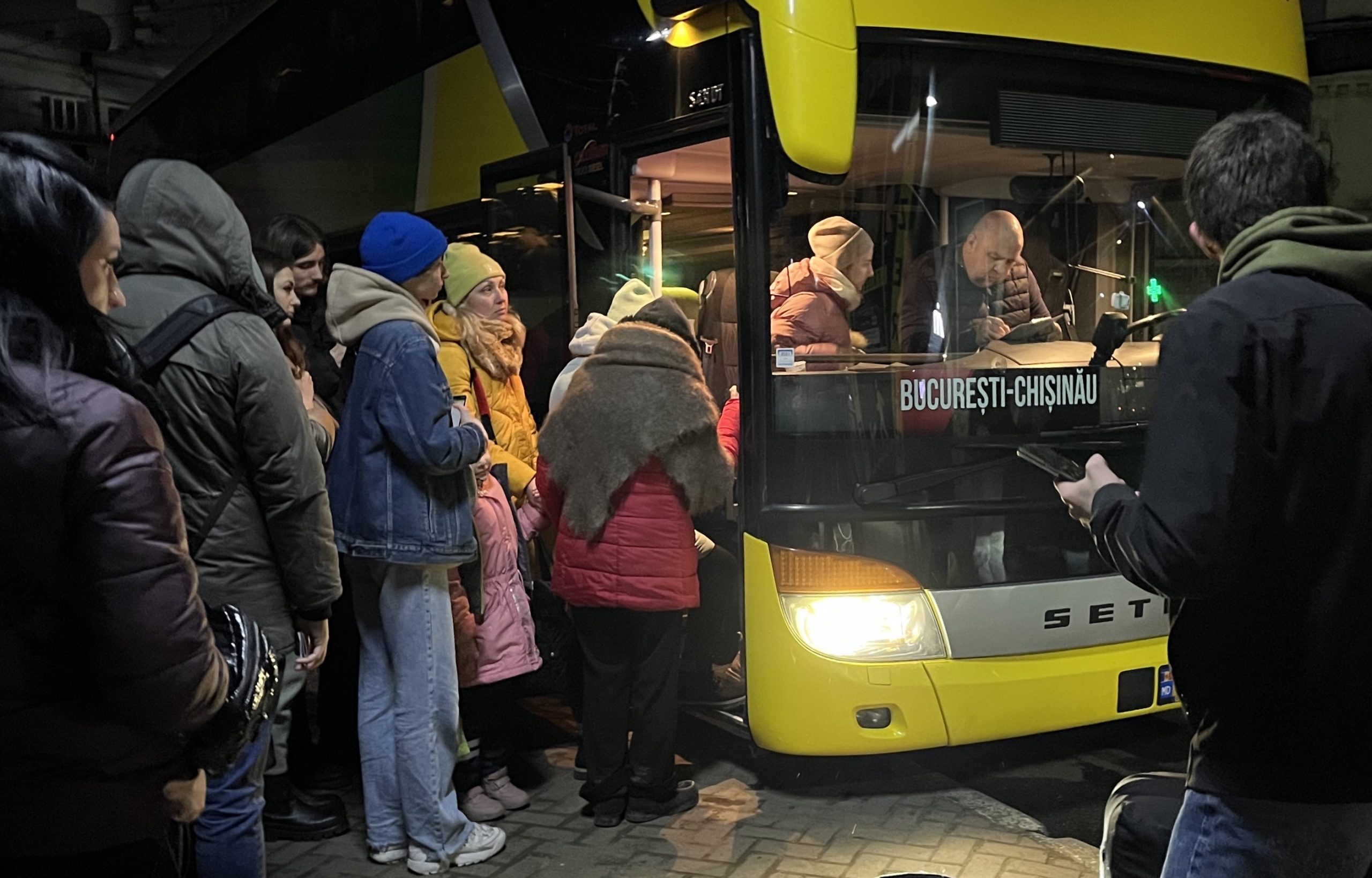 Moldova braces for impact with the war in Ukraine

On the border with Ukraine, Moldova is taking in hundreds of thousands of Ukrainian refugees. However, the country, which is undergoing a phase of pro-European modernisation, risks losing the balance it has achieved.

Moldova, the country which is hosting the largest number of Ukrainian refugees in proportion to its population, is changing rapidly. Since the pro-European PAS (Party of Action and Solidarity) party won an absolute majority in parliament in July 2021, the country has seen energetic progress in human rights and the rule of law. While the ruling class used to be a remnant of the Soviet tradition, it is now more European than in some EU countries. All is not entirely well, however; problems still simmer under the surface of Georgian society.

"Support for Putin here in Moldova has declined, but not enough. We are under the permanent influence of the Russian state-controlled media, yet resistance against the Russian propaganda machine is at an all-time high. Considering also the Moldovans living abroad, about 70 per cent are pro-European," explains Valeriu Pasa, president of the think tank WatchDog.MD.

The presidential palace, traditionally closed to visitors, is now open. It houses, among other things, a collection centre for recycling electronic devices. The President of the Republic is a 49-year-old woman, Maia Sandu. The prime minister is another, even younger, woman: Natalia Gavrilița, 44.

Among the government's advisors are 20-year-olds with impressive careers and work experience in London, Brussels and Berlin. Some are graduates of the College of Europe, the prestigious institute of European postgraduate studies based in Bruges and Warsaw.  They are the students of Federica Mogherini, the rector of that institution. These young people were the ones called back home to reform their country, just a few months ago. Just in time for today’s refugee emergency. A fortune in misfortune.

These developments are part of a wider trend in Moldova, including closer ties with liberal democracies. The question at this point: could they be reversible?

The difficulties facing Moldova are second only to those of Ukraine. Beyond the refugee crisis, in the Moldovan case there is a particular problem in the energy sector, which is  controlled by Russian companies that support, among other things, the separatist region of Transnistria.

Inflation has reached 20%, a record in the last 30 years. At blame is a series of logistical contingencies, but Vladimir Putin's regime also played a role.

Vitali Zveaghintev, founder of Zaw Energy, explains that since the Russian navy has increased its presence in the Black Sea, the Ukrainian port of Odessa – the main port through which supplies arrive in landlocked Moldova – is no longer functional. The setback also has trickle-down effects, going beyond the offensive against Ukraine's fifth largest city.

Suppliers of photovoltaic materials, especially from China, do not want to land in Romanian or Bulgarian ports, Zveaghintev explains. For geopolitical or security reasons? It is not known.

"They leave the cargo in distant ports, mostly in Greece, but also in the Netherlands. Then the cargo has to be transported by road, necessarily through Romania. This, together with the logistical difficulties of the pandemic, means exorbitant transport costs." Local experts confirm that the cost of transport has more than doubled.

Today, the Russian invasion of Ukraine has caused migratory flows unparalleled by any other country, in the space of just two weeks.

Moldova has welcomed refugees with open arms, not skimping on costs. SIM cards are free for all Ukrainians. Hotels, hostels and other facilities host the refugees, often free of charge, and the government supports their needs.

The country is surrounded by Ukraine and borders Romania to the west. It is not a member of the European Union, but President Sandu signed a formal application for membership on 3 March. A week after the Russian invasion of Ukraine, the Moldovan population, like the Georgian population, seems to be distancing itself from the past. The decision will not be easy, however. In 2020, Moldova imported mostly from China, Romania, Russia and Ukraine. Volunteers explain that trade relations with Russia and Ukraine include medicines, canned food, as well as agricultural and industrial raw materials.

The difficulties do not mean that the government and the population are doing nothing. The government has set up three donation centres and forwarded forms to hotels explaining how to ask for support and apply for asylum. Dorian Tsurcanu, who works as a volunteer in one of them, explains that the refugee crisis is manageable for the time being but that, without external help, the situation in the Moldovan capital can only get worse. There is also no shortage of private initiatives. Telephone shops, for example, are offering free SIM cards to Ukrainian citizens. The same goes for local people. For example, Dorian's parents are hosting a family in their own home. "Today it was their turn, tomorrow it could be our turn. People here are afraid of a Russian invasion. I think we should always strive for peace, but we must also be prepared for any eventuality," he says.

However, the prime minister's assistant, 28-year-old Dorin Frăsîneanu, explains that the funds are only available for three months. The government has met with European, German and American representatives, including the EU High Representative for Foreign Policy, Josep Borrell, US Secretary of State Anthony Blinken, and senior officials from the German foreign ministry. Some of the negotiations were tense, according to people present. A visit by Germany’s foreign minister Annalena Baerbock is expected. Will a solution be found?

More : NO to the War! Only Russians can stop the aggression

The second problem has to do with the demographics of those Ukrainians that will remain. While most young women and teenagers will continue their journey to the EU, older people will probably stay. They will be reluctant to move far from their country, to places where they do not speak the language. In Moldova, almost everyone speaks Romanian and Russian, and many also speak Ukrainian.

But it is not only a question of language. Relations between the country and Ukraine are historically strong. Odessa, for example, is a favourite summer destination for Moldovans, while many Ukrainians appreciate the gastronomy and wine of landlocked Moldova. There are also many people with an even more mixee identity: those with one Ukrainian and one Moldovan parent.

Added to this is the question of security. The fighting is two hours away from the borders. People living in the border areas hear the explosions. Odessa is only a two-hour drive from the capital Chișinău. So the battle for Odessa is also a battle for Moldova. The country has an army of fewer than 10,000 soldiers. More than 5,000 Russian troops are stationed in Transnistria, a breakaway province on the Ukrainian border.

It is logical, therefore, that the local population thinks that the surrender of Moldova in the event of a Russian attack would happen in a matter of hours. Moreover, when or if Russia starts its attack on Odessa, the number of Ukrainian refugees in the country will rise further. This will further weaken the social cohesion of the country – the second poorest in Europe, after Ukraine.

In this context, the manipulation of information is particularly dangerous. "Moldova's main problem now comes from TikTok, Instagram and Facebook, not from the army," says Pasa, of WatchDog.MD. "They are spreading hate. We are very angry. We contacted Facebook, but they are not very responsive. Most likely the Russians will try to exploit the issue of gas and electricity, creating new crises and mass protests. Moldova is full of people paid by the Russians."

Some Russian print media, such as Sputnik and RT, have been blocked. The fact remains that the population also consumes news directly from Priviet Kanal, Russia 1, NTV – all channels controlled by the Kremlin and companies like Gazprom. These outlets serve up defeatist narratives, and have a marked influence on the part of the population that does not speak any language other than Romanian, Russian or Ukrainian.

At this point the pro-European front, which is less exposed to the impact of propaganda, will have to find a way to limit the impact of this war. The conflict is already on Europe's doorstep, even more so if Odessa should fall. Valeriu Pasa, the young people of the College of Europe (advisors, MPs, and also the labour minister, Marcel Spatari), and all tech-savvy Moldovans must now get together and find a solution to this European problem, until now underestimated.