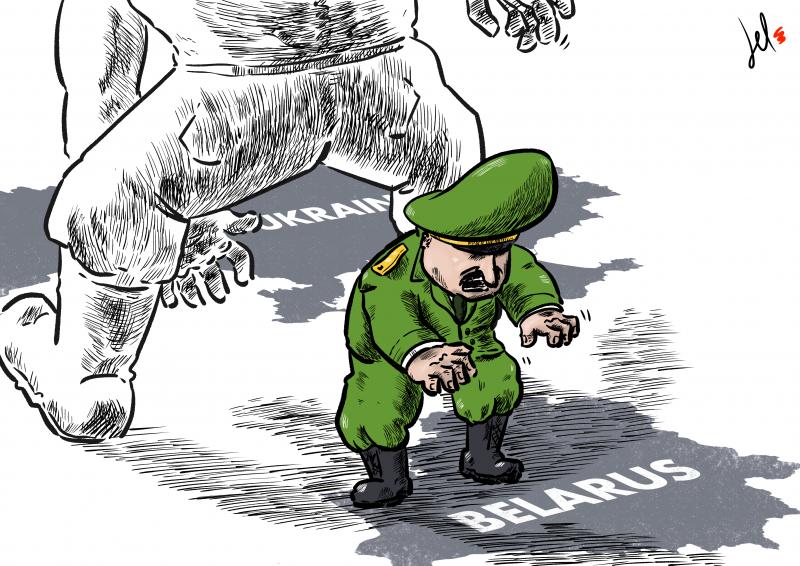 No matter the risks and the repression Belarusisans had to endure since the 2020 democratic uprising, the regime’s military support to the invasion of Ukraine nullifies their struggle in the eyes of the world, laments Belarus opposition author Viktar Martinovič.

I am a man with a blue passport. On it the coat of arms of my country is printed in gold. Its cover announces my citizenship at once in three languages, including English, so that none of the Europeans who look at my passport should entertain any illusions as to my true nature. I’m a real son of a bitch, a monster – because there it is, written in three languages.

It’s OK to despise me.

It’s OK to slash the tyres of my car.

It’s OK to smash the windows of my car.

More : Alhierd Bacharevič: Dear Ukrainians, we have a common enemy – dictatorship. Let’s not be divided

The very fact of my living in your city is to be reported to the police. Who knows, I might be a spy or a saboteur. Once he sees my passport, any European border guard will turn me around and make me go right to the back of the queue. Formally this is to allow women and children who are fleeing from war through first. But no one is under any illusion as to what is going on. The whole queue will understand. And will not try to conceal the contemptuous way they look at me. There’s another way of expressing your attitude: by spitting on the ground. It’s not even like an insult. Just someone who has too much of a bitter taste in his mouth.

I am a citizen of the Republic of Belarus. From the territory of the country that gave me my passport planes are taking off to attack Ukraine. Rockets are being launched from here as well to destroy Ukrainian cities. Therefore I am guilty.

I am that rare biological type – a Belarusian from Belarus. My current place of dwelling is not Poland, Lithuania or Germany – it is Belarus. Most people like me – people who do not think and breathe in unison with the system – left in 2021. I decided to stay in a country that has come to know what mass arrests are. Only a few weeks ago this was regarded as daring, as audacious. People who had left the country wrote me words of support, and those who stayed let me know it was nice not to be alone in the echoing darkness.

The man who has agreed to allow the Russian army onto our territory is not a president elected by me. I did not vote for him

As not being prepared to face the contempt in the way Europeans are going to look at you.

However, let me say a few words in my defence. After all, even someone on trial has the right to make a final statement. It rarely – or in the case of justice in Belarus, never – has any influence on the severity of the sentence, but it does give the guilty party a chance to speak out.

The man who has agreed to allow the Russian army onto our territory is not a president elected by me. I did not vote for him. More than that, in 2020 many people believed that absolutely nobody had voted for him. “Three percent,” is what was said at the time. Do you remember the four hundred thousand protestors on the streets of Minsk – a city with no more than  two million inhabitants? Those four hundred thousand came out to protest back then only because they were firmly convinced that the official results of the election – declaring the victory of the man who has allowed the presence of the Russian army on our land — were false. That we had been deceived.  That the victor was in fact another, completely different candidate, one that was now compelled to hide abroad.

More : Back in the USSR – again

The candidate who wa…