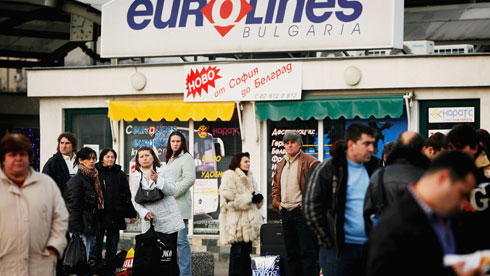 UK’s head in the sand

The anticipated wave of Bulgarian and Romanian immigration in 2014 will not be as high as previously thought, according to a new government report. But that is no reason to ignore the consequences for urbanism and social services, writes the conservative Daily Telegraph.

People wait for international buses at the central bus station in Sofia, Bulgaria

In 2014, Britain and other European countries will open their labour markets to Bulgaria and Romania, as the temporary restrictions imposed when they joined the European Union are lifted. Ministers have made it clear that they cannot do anything to prevent any migrants who wish to from coming here: even the mooted advertising campaign to convince new arrivals that Britain is not exactly Great after all has been shelved.

The question, then, is not how we can stop the new arrivals coming, but whether we are doing enough to prepare. On that score, the answer is a resounding no.

It is admittedly hard to make convincing estimates of the scale of the influx, but the latest effort, carried out on the government’s behalf by the National Institute of Economic and Social Research, takes wishy-washiness to new heights. The authors conclude that “the UK is not a favoured destination” for Bulgarians and Romanians, but add that this may well change.

And while nothing so crude as a numerical estimate is offered, the general sense is that the number arriving will be well below the 50,000 per year predicted by MigrationWatch UK, and that there is really not that much to worry about.

This is dangerously complacent. While the number of newcomers is indeed unknown, it is surely better to be over- rather than underprepared. Then again, it is of a piece with a more general failure to prepare for the consequences of migration. For example, the baby boom fuelled by new arrivals has led to enormous pressure on school places: even without a single extra visitor from Sofia or Bucharest, England will still need more than 400 new primary schools per year in order to cope. The same is true across the public services.

… as the English would say, don’t take these things, which are grist to the mill of the press and a campaign issue for certain British politicians, personally. We are scapegoats for an economic crisis that has coincided with a crisis in the European Union, in which discussions about immigrants have dominated the public agenda!

For Hotnews, however, “it is not easy to be a Romanian in Britain today.” Negative portrayals of Romanians have fuelled xenophobia “exploited by certain politicians like the Ukip candidate in the Eastleigh by-election, Diane James, who claimed they have a natural propensity for crime.” She was later obliged to apologise but she still finished in second place, with 28 per cent of the vote.

The website also notes that an online petition calling for measures to prevent Romanian and Bulgarian immigration, which gathered 140,000 signatures, will be debated in the House of Commons on April 22.