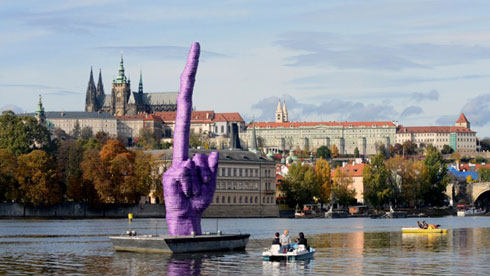 The Social Democrats are likely to win the October 25 and 26 parliamentary elections, but the government may soon have to rely on votes from new populist political parties, whose unpredictable views may affect the country’s EU and NATO stance, warns a Hospodářské noviny commentator.

The middle finger created by Czech artist David Cerny outside the Prague Castle, the seat of the presidency, during early parliamentary elections

Tomorrow's election are said to lack a big theme. However, a few major issues may arise from the outcome of the election. One such may be the volatility of Czech foreign policy.
Current predictions indicate that, if victorious, the ČSSD (Social Democrats may have no choice but to rely on parties whose ideas of Czech foreign policy either directly challenge the Czech Republic’s membership in NATO, or on parties that will try to exploit foreign policy for populist ends.

The Communist Party of Bohemia and Moravia (KSČM), wants the Czech Republic out of NATO. Over in ANO the political movement of Czech-Slovak billionaire Andrej Babiš and Úsvit Přímé Demokracie, [UPD, Dawn of Direct Democracy, the populist movement of the Czech-Japanese entrepreneur Tomio Okamury], and possibly even in SPOZ [Strana Práv Občanů, Party of Civic Rights, of President Milos Zeman] the leaders will decide on foreign affairs issues with no great ideological fervour; they’ll swing with the public mood, or they will do whatever they feel like doing at the time.

Dawn of Direct Democracy does not even mention foreign policy in its programme. ANO has a nice chapter on that, and many add that in Pavel Telička, the party has a former EU Commissioner and chief negotiator of the Czech Republic's entry into the EU. After Telička, it’s true that the experienced businessman Babiš is a master wheeler-dealer; but the voters will demand functionality from the goods – and obedience. His dislike of Poland may show itself in an obstinate attempt to take the confrontation with Warsaw to the wider – ie community – forum.

This is a worrying prospect for the Czech Republic, as we may end up in a situation where the government and parliament are asked to confirm our commitment to NATO, and even directly at the level of the Prague-Washington axis. Things may be similar in the volatile European Union, which is constantly being battered by the afflictions of the eurozone while struggling to preserve its own unity, freshly tested by Great Britain. And last but not least with regard to the external relations of the EU, which time and again will test the views and policies of the Czech Republic.

How will the next government and state department handle the Eastern Partnership programme, and how will Prague’s relationship with Moscow turn out? How active will the Czech Republic be in EU politics in its geopolitical neighbourhood, for example in North Africa? And in relation to Brussels and Washington, how should the EU respond to the US government's recently exposed surveillance activity? [[One question after another keeps coming up. If Prague does not want to come across as erratic, the answers to these questions will require unity and consistency]] from Czech policymakers.

The ČSSD's situation is not to be envied. Some of the forces that have a chance at getting into the Parliament can have a destructive impact (KSČM, Úsvit), while others can use their support to hedge their bets or indulge in a little blackmail (ANO, SPOZ). And one can imagine that for some decisions, such as the posting of Czech troops to Alliance missions, it may be the parliamentary right (fiscally conservative TOP 09 and the Liberal ODS) that come to the support of the ČSSD. Because while the conservatives may be the opposition in domestic policy, they are much more reliable partners in foreign policy than all those aforementioned unidentified political objects.

“Which of them will pull it off?” wonders Mladá Fronta Dnes beneath a photo of the leaders of the 10 parties who will be hoping to gain the support of the Czech electorate on October 25 and 26.

After speaking to some 20 opinion makers, the daily concludes that there is a need for “moral renewal in the political class, along with an attachment to the principles of parliamentary democracy, and a vision that extends beyond the duration of a political mandate” —

“Today at 2pm, one of the most important votes since the fall of communism [in 1989] will begin, points out Lidové noviny. The daily adds that there is —

… a real danger that the communists could win power, because a minority social-democratic government with support from the communists remains the most likely post-election outcome.