Where next for Libya?

The European press as a whole welcomes the fall of the Libyan regime and the momentum it will give to the “Arab spring” -- but it strikes a more cautious note on the future of the country. A future in which Europe has a decisive role to play. 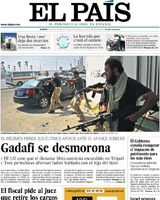 It is “Libya’s hour,” writes El País, which considers the NATO intervention to have been “a good choice”, even if it does question the tardiness in making initial decisions and the “surprising improvisation” that came with getting the military machinery in the air. The coming period in Libya will be marked by “uncertainty”, and “no one can afford mistakes”: neither the rebel leaders nor the international community, which, “following decades of bad policies in the region, has the chance now to contribute to the spread of freedom.” 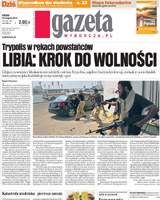 “Toppling dictators requires less time than it does to restore normality to the countries they trampled,” writes the commentator Jacek Pawlicki in Gazeta Wyborcza. “To put the dictator on trial – if that ever happens – will be just one small step,” he writes, “towards the goal of a peaceful and stable Libya with its territory intact, a credible exporter of oil and a significant political centre in the Maghreb.” But Libya will be unable to rebuild “with merely the help of the United States, NATO and the EU,” Pawlicki believes. “China, Russia, Turkey and other Arab and African countries,” he adds, will have to help too.

His more sceptical colleague from Rczeczpospolita, Marek Magierowski, believes that “the EU may advise Libya on how to organise free elections and how to create a system of political parties, or support them financially. Sooner or later, though, the advisers will head back to Brussels, the money will run out and Libya will be left to its own devices. The process will be a very painful one, since, like Afghanistan, Libya is a composite state, a constellation of 150 tribes with their own interests. A democratic and peaceful Libya is an attractive prospect, but seems a distant one.” 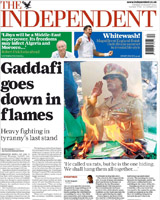 In The Independent, the Middle East correspondent Robert Fisk asks whether Libya’s future will be very different from its past. Certainly, Fisk writes, one can imagine Libya as “a Middle Eastern superpower” and a country “less African and more Arab” that “may infect Algeria and Morocco with its freedoms.” But Libya, Fisk continues, has long “suffered from the cancer of the Arab world: financial – and moral – corruption.” That is why its new “unelected” leaders should be monitored carefully.

According to Fisk, Libya will not be the last country to feel the effects of the “Arab Spring”: Bahrain, Saudi Arabia, Jordan, Yemen, and especially Syria are next on the list. For, he asks, “how long will it be before the people of Europe demand to know why, if Nato has been so successful in Libya...it cannot be used against Assad's legions in Syria, using Cyprus as a territorial aircraft-carrier”?

For Der Spiegel, the rout of Gaddafi is a “triumph for Sarkozy” and “a disgrace for Merkel”. “The government had absolutely no desire to take part in the military action against Gaddafi's dictatorship,” the magazine writes, “and now we know just how dreadful this decision was.” The fate of the Gaddafi regime is a “success for Nicolas Sarkozy, the Americans and the British,” Der Spiegel confirms, adding that “Germany's credibility as a defender of human rights and its reputation as a reliable partner have both taken a hit.” 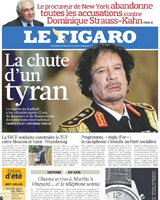 According to Le Figaro, the Libyan campaign is “an unqualified success for French diplomacy.” The Parisian daily also welcomes the successes of Europe in the operation: “The fact that Paris and London have, for the first time, taken over from Washington in carrying out a NATO operation cannot remain without consequences for the future of the Atlantic Alliance. Despite the resistance of Germany, and thanks to the determination of the French and British, Europe has proved itse well capable of taking action in its own backyard,” Le Figaro writes.

In the Corriere della Sera, commentator Antonio Ferrari, however, invites the European Union “not to stand on the sidelines as a spectator” of the changes rolling through the Arab world. “What is happening in the Arab world,” he writes, “should spread the conviction that the ‘spring revolutions’ can be transformed into a genuine opportunity and encourage countries to grasp it. Our immediate neighbours would benefit – and so would we.” 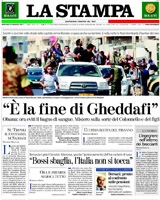 With the fall of Gaddafi, the European countries that have helped topple him are jostling for a privileged position with the new regime, explains La Stampa. “The competition between foreign offices is such that if Sarkozy announces that he will receive Moustafa Abdel Jalil, the President of the National Transitional Council, at the Elysee Palace on August 24, Silvio Berlusconi is surely working on an ‘agreement for Libya’ in Rome that same day – if not the day before.”

Paris and Rome are also bumping shoulders over post-Gaddafi Libya on a commercial level, particularly when it comes to petrol, notes the paper, which observes in a headline that “France and Italy aim to tank up on Libyan gas.” On the other hand, “Russia, China and Brazil,” whose oil companies were operating in Libya and who were opposed to military intervention, “may pay a high price.”