The Financial Times reports that the estimated 8m Roma in Europe have been particularly hard hit by the financial crisis. Already the most vulnerable economic group, this trend has not only increased their financial woes but also prompted hostility against them from various quarters.

The economic slump has hit Europe's estimated 8m Roma, widely seen as the continent's most economically vulnerable population, particularly hard, writes the Financial Times. Many gypsies have long had trouble finding work in the formal economy and have been among the first to lose their jobs during the crisis.

In Hungary, where the economic crisis has exacerbated an existing problem of deindustrialisation in the poor north-eastern part of the country, unemployment has become a particularly acute problem for Roma. Hit hard by the country's worst recession since the transition from communism, Hungarians are increasingly turning to Jobbik, a far-right party that blames gypsies for rising crime. Romania, with its much larger and better-integrated gypsy population, has had less of the violent conflict seen in Hungary in the past year, but it may have a full-blown social crisis to contend with if the trickle of Romanians returning home from Italy and Spain becomes a flood as the construction industry in southern Europe goes sour.

In the Czech Republic, the atmosphere for gypsies has become so poisonous that hundreds have applied for refugee status in Canada, prompting Ottawa to re­impose visa requirements on Czech travellers. As the region struggles to extricate itself from an unexpectedly sharp economic downturn, it will probably be some time before the Roma are able to struggle out of poverty. 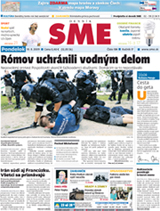 Police have intervened in force to disperse an anti-Roma demonstration in Šarišské Michalany. On 8 August, over 200 right-wing extremists gathered in the small town in the centre of Slovakia to protest against what they describe as "the gypsy terror" represented by the local Roma community. Leading with the headline "Roms protected by water canon," the front-page report in SME notes that the extremists certainly lost the battle with police, but they gained the support of part of the town's inhabitants. The Slovak daily further contends that the demonstration will reinforce the prejudice of a majority of Slovaks who view Roms as "work-shy thieves and murderers." In failing to confront this opinion, Slovakia's politicians are not doing anything to put an end to bigotry, concludes SME.